OLYMPIC medallist Lindsey Vonn showed off her buns of steel – by squatting over a toilet.

The bizarre gym drill was part of a routine dubbed the "five most insane workouts" by the American ski icon. 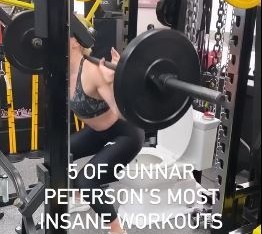 Together with fitness guru Gunnar Peterson, Vonn, 35, jumped on the squat rack accompanied by a heavy bar and an unusual added extra.

An open toilet sat below Vonn to help keep her form flush in the middle.

Mercifully, the toilet was left aside for the other "insane" drills and the American avoided taking part in any runs.

Instead, she grabbed a huge sledge hammer to slam down onto a cushioned box.

Another workout saw the three-time Winter Olympic medallist hold herself up at the end of a slowly-moving treadmill.

Maintaining the tiresome plank position was not enough however, as Peterson fed balls down the conveyor belt for her to pick up and move aside.

Vonn also had to climb aboard a diagonal ladder machine and undertake a shoulder exercise that perfectly mimicked a front crawl stroke, as if she were swimming.

Vonn posted the clip on Instagram, captioned: "Which one would you try?"

But Peterson added that they were: "Only ‘insane’ until you do them…"

During the workout, the retired ski star sported leggings and a sports bra from the Project Rock line of clothing – owned by WWE and Hollywood icon Dwayne 'The Rock' Johnson.

Secret to life: Engage the glutes 💪🏻

Secret to life: Engage the glutes 💪🏻