Facebook has banned the sharing or viewing of our news articles on its platform. For independent journalism straight from the source, download our app and sign up to our newsletters.

Sexual harassment and bullying are widespread in federal political offices, with a review finding nearly two-thirds of staffers were hesitant to report it because they worried about jeopardising their careers. 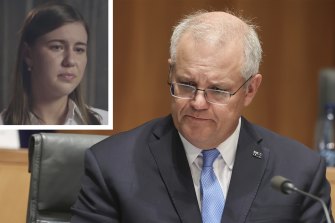 Prime Minister Scott Morrison says he should have been told about the allegations made by Brittany Higgins. Credit:Alex Ellinghausen

More than three-quarters of staffers surveyed by the Commonwealth Public Sector Union did not believe the Department of Finance would support them if they reported serious workplace incidents, igniting calls for an inquiry into the Parliament’s workplace culture to be widened.

In November the Finance Department started a review of sexual harassment and bullying policies, and the union ran the survey to inform that work.

Prime Minister Scott Morrison was on Thursday forced to explain why he wasn’t told at the time of allegations from former Liberal staffer Brittany Higgins that she was raped in a ministerial office in March 2019. Mr Morrison told Question Time that Defence Minister Linda Reynolds should have given him “anonymised” details of the incident.

“That is something that I wish she [Senator Reynolds] had done, but she did not,” Mr Morrison said. “Her reasons for doing that were to protect Brittany Higgins’ privacy… People may form different views on whether that was a wise decision.” 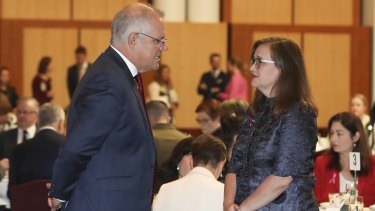 Senator Reynolds remains in hospital for treatment of a pre-existing medical condition.

The Australian Federal Police has now told politicians they must report allegations of sexual assault and other criminal matters “without delay”, warning they risked prejudicing investigations if they shared allegations with media or others before police.

“I cannot state strongly enough the importance of timely referrals of allegations of criminal conduct,” AFP commissioner Reece Kershaw wrote in a letter to Mr Morrison that was passed on to all MPs on Thursday.

Labor frontbencher Madeleine King wants an independent review into the workplace culture of parliament, announced by Mr Morrison last week, to be expanded to also look at the threats facing MPs and their staff from members of the public.

Ms King has been forced to hire her own lawyer after she took out a restraining order against a man who has repeatedly turned up to her office and abused staff for more than a year, saying it was “intimidating and frightening”.

She said Finance was “unable to assist” and the department “does not provide adequate support when people are threatened and frightened”.

“My difficulty is that there is no support for the MP and the senator or their staff for when this happens.

“Whilst we can ring the AFP, the local police, the ongoing resolution of these matters is just not addressed. It’s up to the MP alone… there’s no help from the parliament. In any other workplace, you could expect to be able to phone someone and get help.”

The review’s terms of reference are still being finalised but Finance Minister Simon Birmingham said it would cover the workplaces of federal parliamentarians and their staff including electorate offices and Federal Parliament.

“It’s expected the review will focus on ensuring the right support mechanisms and advice are available to ensure these workplaces are safe and respectful,” he said. “Being an independent review, it will be able to make findings and recommendations where appropriate on any relevant matters that arise during the inquiry.”

CPSU national secretary Melissa Donnelly said the union had raised the problem of sexual harassment and bullying in every workplace safety meeting with the Department of Finance for more than two years, “with almost no action taken”.

“The environments that MoPs [Member of Parliament] staff work in are complex, staff often feel that reporting incidents will go nowhere and would have detrimental effects on their career prospects,” she said. “The clunky and opaque reporting structures provide little support or confidence to staff that complaints will be followed up appropriately.”

Ms Higgins has called for “fundamental reform” of the MoPS Act, which creates the workplace rules for political staffers, as have other advisers who have aired allegations of sexual assault and harassment. One politician said the clear thing to come out of discussions over the past fortnight was “universal dissatisfaction” from both staff and MPs with Finance’s processes.

Labor’s national executive will consider on Friday a new code of conduct for party members, officials, elected representatives, political staff, volunteers and contractors. This would be underpinned by detailed policies on preventing and responding to sexual harassment, bullying and harassment and a complaints handling process.

It includes clear expectations of behaviour and definitions such as what comprises bullying, as well as a recommendation for continuous review to make sure policies keep up with best practice.
The code has been in development for more than a year, with work led by Member for Newcastle Sharon Claydon.

“The scope is enormous and is a very strong sign of Labor’s commitment to an ongoing process of review and … ensuring that we have safe, not just workplaces, but every aspect of our organisation is a safe space for people,” she said.