Locked in under lockdown: "we can't complain", say pals stuck in pub

LONDON (Reuters) – If you are going to be stuck under lockdown, there are worse places to end up than a spacious pub with free beer on tap. 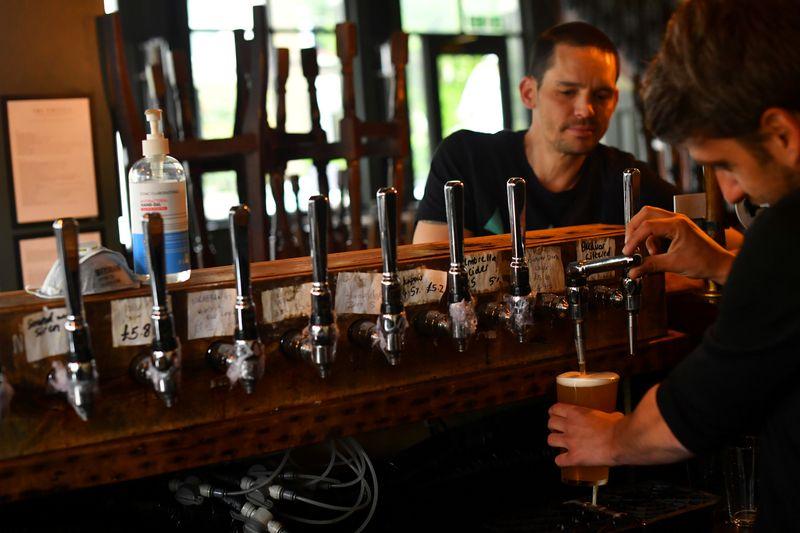 Friends Steve Pond and Dom Townsend consider themselves lucky to be sharing an apartment above The Prince in Stoke Newington, north London. Like all British pubs, it is closed until further notice as part of government measures to slow the spread of the coronavirus.

Inside, chairs are turned upside down on tables, blackboards advertise sporting events long since cancelled and pots and pans gather dust in the kitchen.

“I moved in just a couple of months before lockdown which has worked out well, considering,” said Townsend, 29, now assistant manager after starting there as a barman.

With no crowds to serve, he and Pond, 39, while away the time playing improvised crazy golf on the wooden floor, taking each other on at chess or cooking barbecues on the roof when the weather is good.

“We’ve ended up as friends … It’s been nice. We can’t complain. We’ve got fresh beer on tap,” Townsend told Reuters, pouring Pond a pint and placing it next to the hand sanitizer on the bar.

For Pond, the epidemic was a major worry early on because he has an existing lung condition.

“So I kind of started to self-isolate a couple of weeks before, but after confirmation from my doctor I found I could go out so that kind of eased it a bit for me.

“One of the lows I suppose is not having the locals come in. It’s lucky me and Dom get on so well.”

For all the advantages of their situation, they are looking forward to a full house once what seems certain to be the longest lock-in in history finally ends.

Some European countries are beginning to ease their lockdowns but Prime Minister Boris Johnson says it is too early to do so in Britain, where the hospital death toll from COVID-19 has risen to almost 22,000.

“A big party; go out to eat somewhere that I miss; just see your friends,” Townsend replied, when asked what he would like to do most when the lockdown was lifted.