Motivated by violence inflicted on his family by paramilitaries, he became the leading voice in a coalition of Indigenous peoples. Complications of the coronavirus contributed to his death. 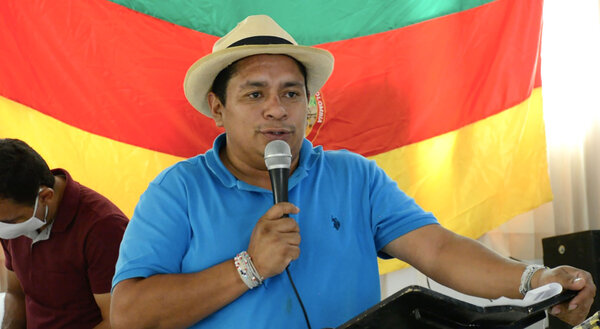 Like so many Indigenous people in Colombia, Luis Fernando Arias suffered acutely from the armed conflict that tore his nation apart for decades. Paramilitary fighters in 2001 rolled into his community and killed his grandfather. Three years later they killed an uncle of his and threatened his father, forcing his family to flee to the capital, Bogotá.

“He had to live with all the pain of the Indigenous people in the country,” his father, Jaime Arias, said in an interview. “But he wasn’t scared. It gave him strength to fight. It was from that moment he wanted to fight for the rights of his people.”

Luis Arias rose to become senior adviser to the National Indigenous Organization of Colombia, an influential voice for Indigenous rights, peace and environmental preservation. His role effectively made him its president.

He died on Feb. 13 in a clinic in the coastal city of Barranquilla after having a heart attack, family members and Indigenous leaders said. They attributed his death as well to complications of the coronavirus. He was 41.

“He left us with beautiful memories, so we don’t have to live on crying,” Eulalia Yagarí, a co-founder of the Indigenous organization and a member of the Embera people, said in a statement. “They’re memories of strength and bravery.”

Mr. Arias, a member of the Kankuamo people, was born on Nov. 4, 1979, in the town of Chemesquemena, in Colombia’s Sierra Nevada. His father was a tribal leader, and his mother, Fanny Arias, was a farmer and artist.

As children, Luis and his seven siblings helped their mother farm and weave traditional bags. He attended the Popular University of Cesar, in Valledupar, a nearby city. He studied law and became an activist on behalf of Indigenous rights but was unable to complete his degree when violence by paramilitary fighters forced him to flee.

Mr. Arias began working with the National Indigenous Organization in 2005, organizing political action and protests. His driving ambition, friends and family said, was to ensure that Colombia’s 102 Indigenous groups had a place at the table in deciding the country’s future.

He was a delegate representing Indigenous peoples at negotiations in Havana in Cuba that led to peace between the Colombian government and guerrillas of the Revolutionary Armed Forces of Colombia in 2016, raising his voice to make sure that the peace agreement safeguarded the rights of both Indigenous and Afro-Colombian communities. As a result of efforts by him and other delegates, the accords included an “ethnic chapter” aimed at restoring Indigenous rights.

He brought the plight of those communities to an international stage, testifying at a congressional hearing in Washington and speaking privately with legislators.

Along with his father, Mr. Arias is survived by his mother; his siblings; his wife, Sindy Paola Arias; and his two children, Jaime Luis and Luis Manuel.