‘Her poor planning isn’t MY problem!’ Man sparks FURIOUS debate after he refused mother’s request to give up his extra-legroom seat on 10-hour flight so her husband could sit with her and their baby

A man sparked debate after he revealed he refused a mother’s request to give up his extra-legroom seat and move to the second row on a 10-hour flight so that her husband could sit with her and their baby.

The debate about the etiquette of switching seats on a plane has long been debated – with DailyMail.com Jaci Stephen even offering up her view on the matter earlier this year – however one man brought the topic to the forefront of conversation yet again when he asked Reddit to decide if he was an ‘a**hole’ for refusing to move so that a family could sit together.

In his now-viral post, the unnamed plane passenger explained that he and his wife were boarding a 10-hour flight from Europe to Asia, when a mother asked whether he would mind switching seats with her husband, who was sitting in the second row, a request that he quickly denied.

‘My wife and I were travelling on a 10-hour flight from Europe to Asia last week,’ the man wrote. ‘We booked our tickets well in advance and also managed to book the specific seats we wanted – two seats in the first row.

‘We paid for these seats as it was going to be a long journey and wanted the extra leg space. 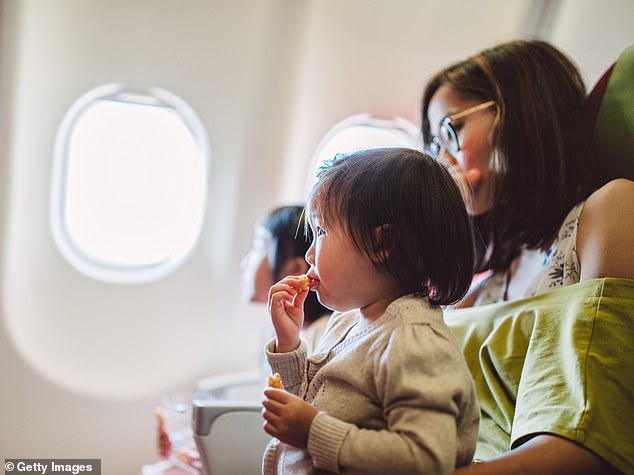 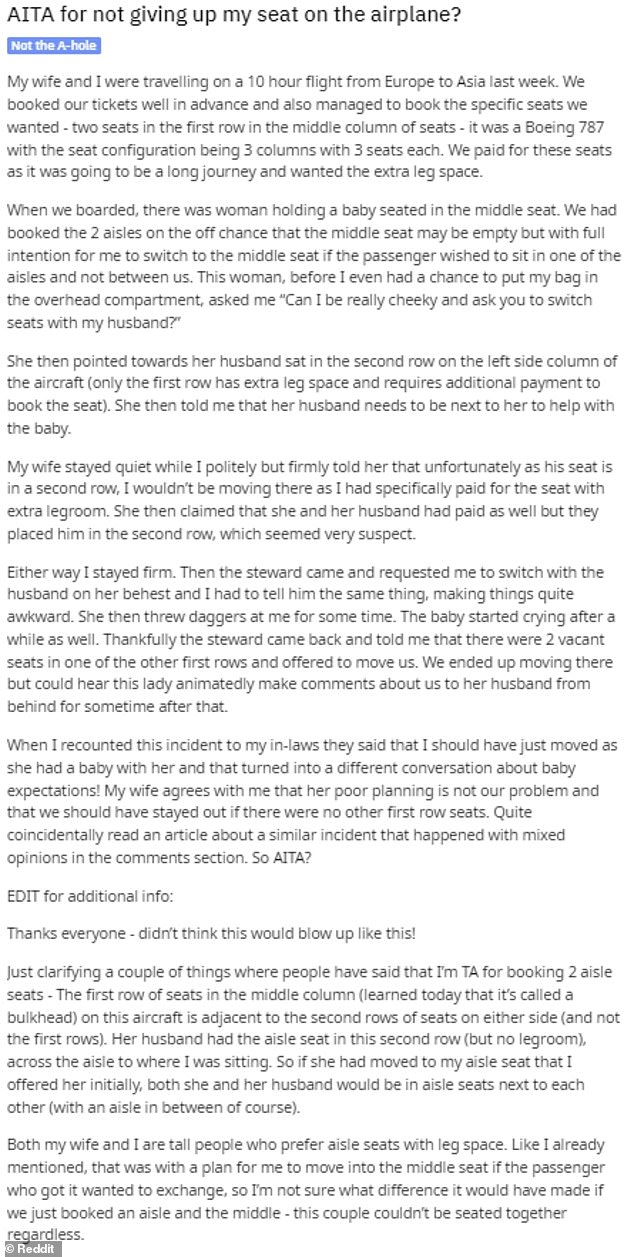 The man questioned whether or not he was in the wrong in a thread titled, ‘Am I the A**hole? and explained he had picked and paid extra for his seats

‘When we boarded, there was a woman holding a baby sitting in the middle seat. This woman, before I even had a chance to put my bag in the overhead compartment, asked me “Can I be really cheeky and ask you to switch seats with my husband?”

‘She then pointed toward her husband sitting in the second row (only the first row has extra leg space and requires additional payment to book the seat). She then told me that her husband needs to be next to her to help with the baby.

Would YOU switch seats so a family can sit together?

Would YOU switch seats so a family can sit together?

‘My wife stayed quiet while I politely but firmly told her that unfortunately as his seat is in a second row, I wouldn’t be moving there as I had specifically paid for the seat with extra legroom.’

The mom was so angry she even called over a member of the cabin crew in hopes of solving the seat debacle, however, the man still refused to switch seats.

The crew member was luckily able to dissolve the issue by locating two other seats in the front row the couple could move to.

And while it left everyone happy with their seating arrangements, the Reddit user noted that the mom was still angry at him.

The viral post continued: ‘A steward came and requested me to switch with the husband, and I had to tell him the same thing, making things quite awkward.’

‘The woman then threw daggers at me for some time. Thankfully the steward came back and told me that there were two vacant seats in one of the other first rows and offered to move us.

‘We ended up moving there but could hear this lady animatedly make comments about us to her husband from behind for some time after that.

‘When I recounted this incident to my in-laws they said that I should have just moved as she had a baby with her and that turned into a different conversation about baby expectations.

‘My wife agrees with me that her poor planning is not our problem and that we should have stayed out if there were no other first row seats.’

Luckily for the man, Reddit users were quick to come to his defense and even noted he did the right thing because he had ‘no obligation to [the mom]’

Reddit users went into a furious rage at the mom after the man explained his situation, which comes just two months after DailyMail.com columnist Jaci Stephen explained her take on switching seats.

DailyMail.com Columnist Jaci Stephen’s confession as to why she ALWAYS refuses to switch seats

Jaci confessed she ‘absolutely refuses’ to swap seats, no matter how angry the passenger requesting to switch may get.

In her confession, she explained she travels a lot and carefully selects her seat way in advance, she noted she even choose which direction she wants to face when traveling.

Jaci added that in the past, she’s had many passengers yell at her, and glare at her in annoyance, but she doesn’t mind as she noted its her ‘right to refuse.’

Similar to Jaci’s confession, the Reddit user explained he stood firm on his decision because he planned ahead and paid extra for the seats.

Luckily for the man, Reddit users were quick to come to his defense and even noted he did the right thing because he had ‘no obligation to [the mom]’.

One user said: ‘You paid for extra leg room, and paid for that seat. You were under no obligation to switch. If she wanted to sit with her husband, she should have booked side by side seats.’

‘You had no obligation to her. Why couldn’t she switch with someone in her husband’s row? As for the “but she had a baby,” that’s irrelevant. She could trade off with her husband. She might have a beef with the airlines, but not with you,’ wrote another user.

One user added: ‘I can’t believe there are people who have the audacity to ask someone to switch seats, much less insist. Why is their comfort more important than anyone else’s? Especially if someone else planned & paid for their comfort’

Another user commented: ‘Upvoted and agreed, but just one minor caveat: you can plan meticulously and perfectly only to have the airline take a massive dump on your plan. Like cancelling your flight, rebooking you, downgrading you, not refunding the difference until you point out the discrepancy, and sticking you in the center seat nearest the toilet because it’s the only empty seat on the rebooked flight. If that sounds oddly specific, it’s because it happened to me.’