Manny Pacquiao would destroy ‘bum’ Conor McGregor in 3 rounds, his coach said: ‘McGregor is nothing’ 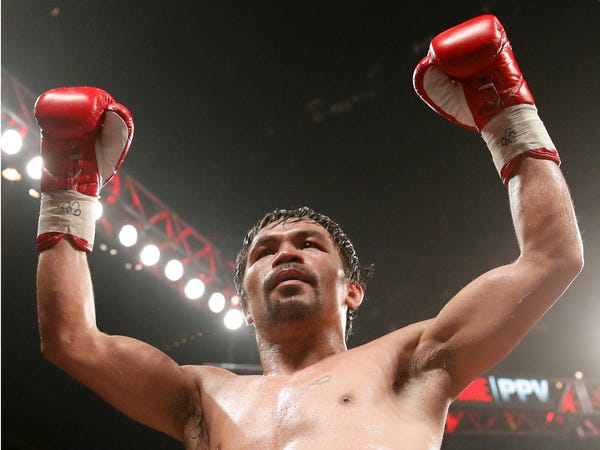 Manny Pacquiao's strength coach called Conor McGregor "a bum" who the boxer would destroy in three rounds if they ever fought in the ring.

"He will obliterate him too fast and too strong as an amazing fighter," Fortune added. "McGregor is nothing."

An eight-weight world boxing champion, Pacquiao has held world titles in every decade from the late 1990s, and, in his most recent bout, knocked Keith Thurman down before out-pointing the American in 2019.

There has been great speculation as to whom the Filipino fighter might fight next, and the former two-weight UFC champion McGregor said earlier this year that he had held talks with Pacquiao to discuss a crossover fight.

Though McGregor has only fought in boxing once before, a 10th round stoppage loss to Floyd Mayweather in 2017, a second foray into the ring — this time against Pacquiao — could generate $250 million.

Pacquiao's manager Sean Gibbons, seen in a video alongside Pacquiao, even challenged McGregor to a boxing rules fight.

As the months went by, speculation regarding a Pacquiao vs. McGregor super-fight died down.

However, in May, McGregor's representative Audie Attar said a bout between the two fighters remains possible, as "boxing is definitely something he [McGregor] plans on doing."

In August, McGregor even started tweeting in Tagalog, the national language of the Philippines, reigniting rumors a Pacquiao match was forthcoming.

Fortune, though, seems unimpressed. "Why even make that guy rich? And it won't do absolutely nothing for Pacquiao as far as his legacy [is concerned]," he told The Manila Times.

"Remember, this is just my opinion. Manny goes down as the greatest fighter in history when he finishes, because no one has done what he accomplished in boxing. Why destroy your legacy for a bum like McGregor?"

According to the Filipino newspaper, Fortune would rather see Pacquiao tested against skillful welterweight boxers like Mikey Garcia, or the winner from the upcoming Premier Boxing Champions pay-per-view showdown between Errol Spence Jr. and Danny Garcia.

Manny Pacquiao will soon be retiring

Earlier this month, Pacquiao's long-time boxing coach Freddie Roach said the 41-year-old is already thinking about the end of his career, and could retire after two more fights.

Roach put forth the names of Mikey Garcia and Terence Crawford as potential opponents to retire on, but claimed a Floyd Mayweather rematch was Pacquiao's priority.

"What he would like best is [to fight] Mayweather one more time," Roach told Boxing Scene.

Pacquiao was comfortably beaten by Mayweather in 2015, but Roach believes the result would now be different. "I think the activity would be too much for Mayweather," he said.

The Manila Times has also been reporting about Pacquiao's near-future retirement, and even said the fighter's family only want him to compete one more time.

The newspaper reports that his family's preference would be a McGregor fight.