MARK ALMOND: Kremlin is exploiting the Covid-19 and Brexit chaos

MARK ALMOND: The Kremlin is ruthlessly exploiting the Covid-19 and Brexit chaos… and Britain’s cut-price defences

No sooner has the Government gained the upper hand in the fight against Covid – with its roll-out of a mass vaccination programme – than Britain’s defences are being tested by an altogether different invader.

A sudden flurry of Russian naval intrusions into our coastal waters over recent months is causing concern at the highest levels.

It is a stark reminder of a crucial maxim that underpins all international diplomacy. Regardless of what may be sitting in its in-tray, no government can afford to take its eye off national defence.

And if you turn your back for just a second, the Russian bear will pounce. 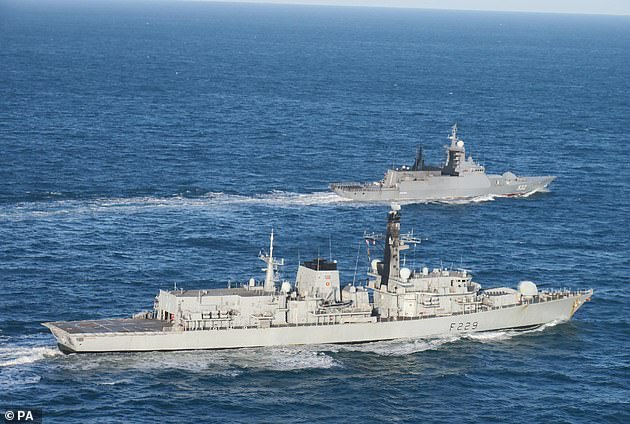 The Royal Navy has been forced to deploy 17 times this year to escort Russian vessels passing through British waters, figures reveal. This is up 26 per cent on last year. Pictured: A Russian corvette Boikiy (back) which was shadowed by HMS Lancaster

In this year alone, the Royal Navy has had to be deployed 17 times to escort wayward Russian vessels – including a surfaced submarine – which is an increase of more than a quarter on last year.

It is proof, if we needed it, of President Vladimir Putin’s eagerness to exploit the Covid and Brexit chaos here, as well as our shortages in military manpower and equipment. Indeed, no doubt it was with this in mind that the Government last month announced a £16billion boost to defence spending, with a particular focus on the Royal Navy.

But, as Putin will be well aware, the fruits of that investment will not be seen for many months, even years. As a result, Britain remains disturbingly vulnerable.

Only this week, planned exercises with Navy reservists were suspended to save money. No doubt such cheese-paring is regarded with glee by the Kremlin, which seizes every opportunity to enter Britain’s waters to gain intelligence on what remains of our core coastal defences. 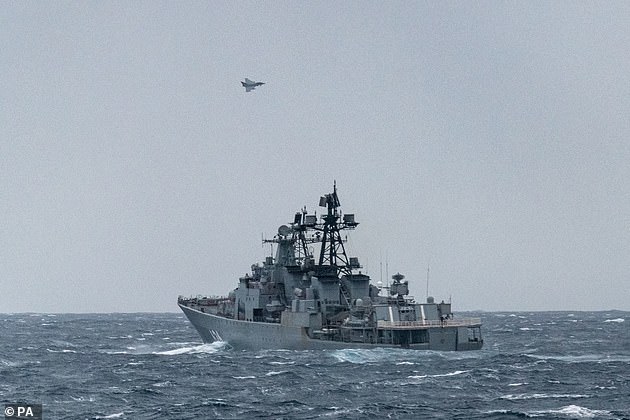 This marked the busiest period for the RAF Quick Reaction Alert force in a decade, it can be revealed. Pictured: A Typhoon jet flying above the Russian warship Vice-Admiral Kulakov

But as a near-ramming incident between a Russian destroyer and the USS John S McCain last month off Russia’s Far East coast demonstrates, playing armed cat-and-mouse at sea is high risk. If a captain miscalculates or is ordered to face down the other vessel, there are very real risks of a conflict escalating.

That isn’t to say there isn’t a hint of hypocrisy to Russia’s belligerence.

The Russian navy and air force routinely put on a show of force to assert sovereignty over waters such as those off the Crimea which few other states regard as Russian.

Yet when the Kremlin’s war planes loiter on the edge of Britain’s airspace, causing RAF Typhoons to scramble as they have done 11 times this year, it responds to our protests with contempt. As so often with President Putin, it’s a case of ‘Do as I say, not as I do’.

What is particularly concerning about Russia’s recent aggression is that the Kremlin often sets an example for other nuisance regimes. 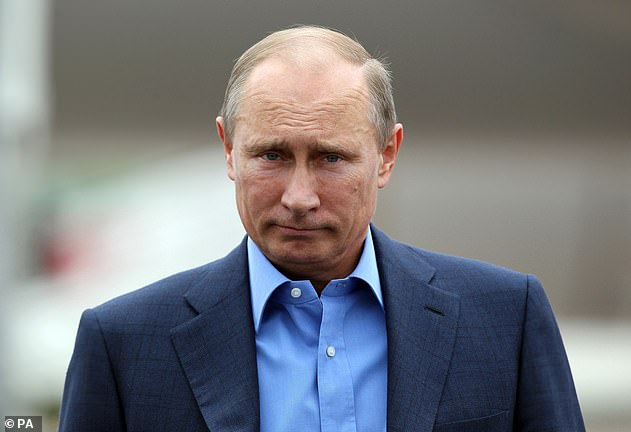 It is proof, if we needed it, of President Vladimir Putin’s eagerness to exploit the Covid and Brexit chaos here, as well as our shortages in military manpower and equipment

It’s only too easy to imagine how Turkey – Nato’s estranged ally which now enjoys better relations with Russia than any European country – could follow suit and send its warships into Greek waters to assert its regional authority.

Either way, there can be little doubt that Russia’s encroachment into British waters is designed to serve as a stinging riposte to the Western assumption that Moscow is in retreat. Certainly on paper, Russia’s declining population and economy battered by sanctions ought to make it weak.

Add to that its own spiralling Covid crisis and the Kremlin ought to have more important things on its mind than poking Britain in the eye.

But for Vladimir Putin, all these problems at home make showing off Russia’s military assets, and bolstering his standing on the global stage, all the more important.

And with Brexit firmly on the horizon and the inauguration of Joe Biden as America’s president in January, it is highly likely that Russia will only continue to probe our defences. Putin is intent on flexing his muscles. What could possibly go wrong?

Mark Almond is Director of the Crisis Research Institute, Oxford

The Royal Navy has been forced to deploy 17 times this year to escort Russian vessels passing through British waters, figures reveal. This is up 26 per cent on last year.

Moscow has also increased its activities in the skies, with RAF Typhoons scrambling 11 times to intercept Russian warplanes flying on the fringes of our airspace.

This marked the busiest period for the RAF Quick Reaction Alert force in a decade, it can be revealed. 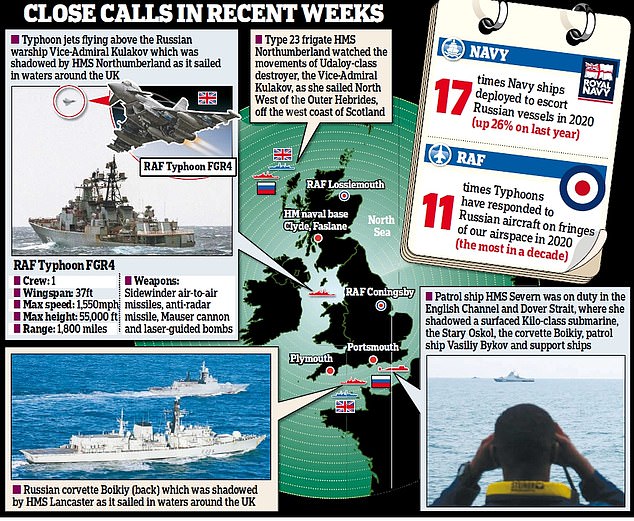 A defence source said: ‘The number of Russian vessels operating within the UK during November was unusually high for the time of year and included anti-submarine warfare capability demonstrations of newer vessels.

‘Russian use of Long Range Aviation is not abnormal, but its activity was designed to cause reaction.’

Some in the Navy believe Russia may have deployed such a high number of ships at one time because they got into difficulty in poor weather conditions.

Retired Navy commander Tom Sharpe said one reason why Russia may have increased its activity this year was because it wanted to exploit the coronavirus pandemic and Brexit uncertainty.

He said: ‘States like Russia thrive on uncertainty and they will do anything they can to add to uncertainty.

So with Covid and Brexit, why not send a couple of ships round and have a look? 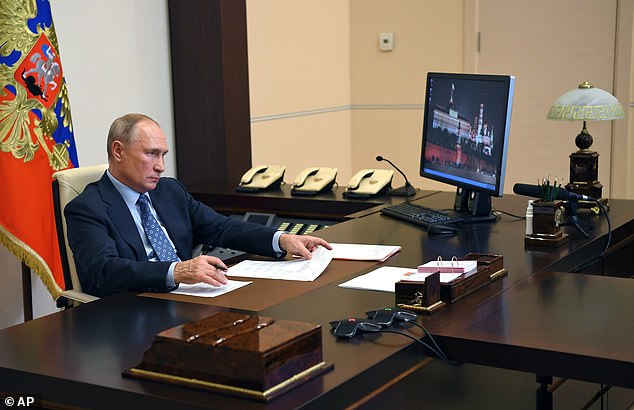 ‘They’ve got a growing fleet they want to exercise and flex their muscles and show their teeth.’ Rear Admiral Dr Chris Parry , who fought in the Falklands War, said the Russians were likely to be testing UK responses as well as carrying out training.

He said seas around Russia are icy at this time of year and so their ships often travel towards the UK to train in warmer waters.

He said: ‘Nelson said the training ground is the battle ground – you always go and practice where you’ll have to fight.’

First Sea Lord Admiral Tony Radakin said that even with the pressures of coronavirus, the UK remained at short notice to ‘respond to threats both in home waters and around the world’.

In recent years the Russians have also been accused of increasing their submarine activity in the North Atlantic.