A couple who were married for 17 years formed a throuple with a woman they met on a camping trip to help get through a ‘rough patch’.

The insurance rep, who they met through a mutual friend,  had also been going through a hard time and was recently divorced.

Eli and Mikey had three children – Linkoln, 12, Maddox, seven, and Lennox, five, – before they met Alida, but they now consider her another parent to their brood. 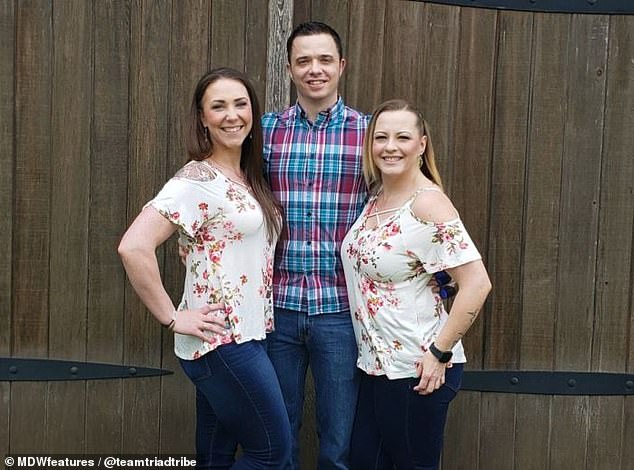 Eli, 36, (center) and Mikey Titus, 37, (right) met Alida Gibson, 31, (left) at a private camping festival. They had been married for 17 years when they decided to form a triad 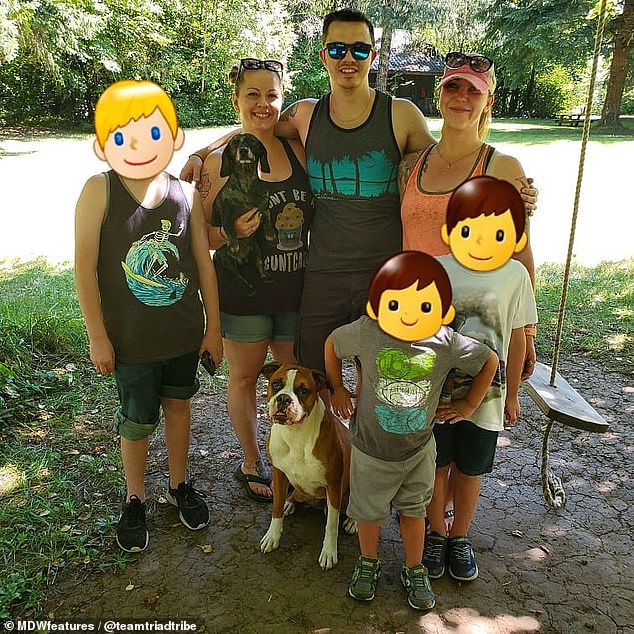 Between them they have three children, Linkoln, 12, Maddox, 7, and Lennox, 5, all born during Mikey and Eli’s original marriage.  Eli, (center) and Mikey  (left) and Alida (right) are pictured with their children and dog

The group met a camping festival two years ago and began chatting and instantly bonded with each other, sharing their love of the outdoors, crafting and music.

Eli and Mikey soon realized that Alida would be the perfect fit to join their relationship.

But while the triad have openly spoken to the children about what makes polyamory different, other people aren’t so understanding.

People have said to them that they cannot believe Eli has two partners and even suggested they must be with him for money.

‘Sometimes, it feels that looks could kill,’ Mikey said.

‘We hear people say, “he must have money,”‘ or “Eli is the man,” all the time. It makes it seem as if our relationship is dependent on him which of course, it’s not. 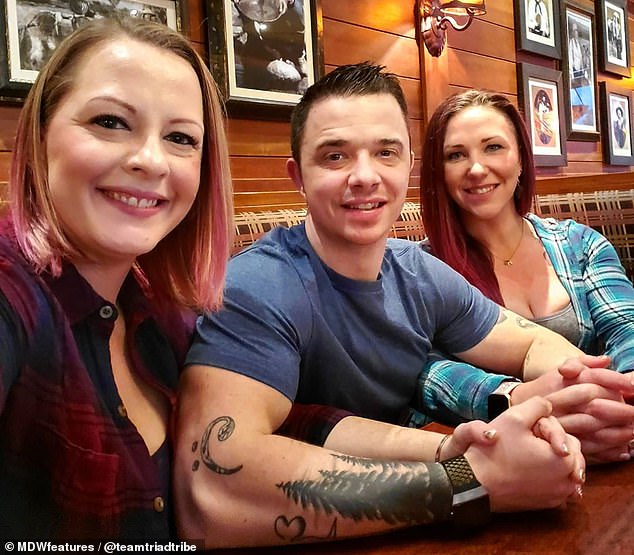 The throuple are pictured enjoying a meal out together. When they met they instantly bonded with each other, sharing their love of the outdoors, crafting and music. PIctured left to right: Mikey, Eli and Alida

‘We live in the pacific northwest so “weird” is a regular occurrence here but even still, people say, “I couldn’t do that,” or “it’s just a phase.”

‘Being in a polyamorous relationship is pretty literal to us. Polyamory means “many loves” so we believe that the more love, the better,’ she added.

‘Within your family, you don’t just love your mum or your dad, so why should we restrict ourselves to one love in our romantic relationships if there’s a connection there with someone? 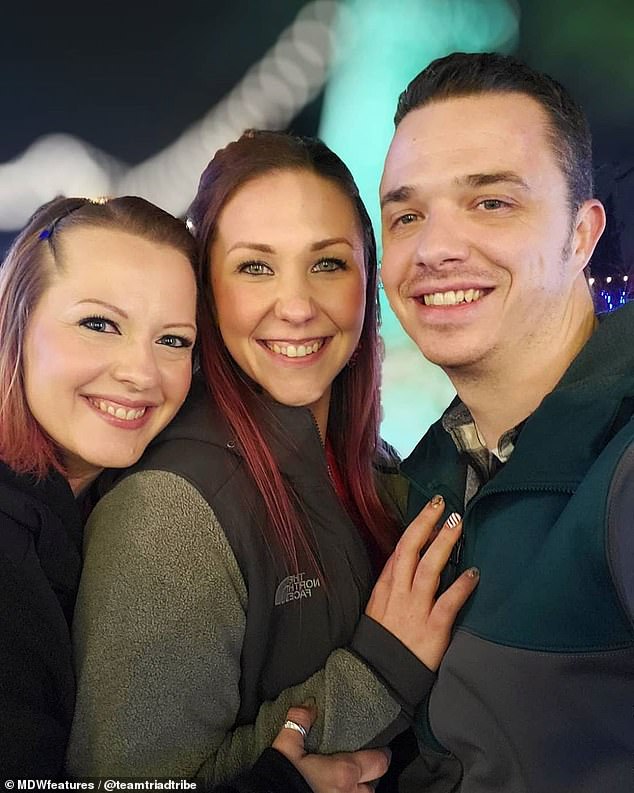 All of them say they have never felt as complete in a previous relationships as they do now. Pictured: Left to right: Mikey, Alida and Eli

Mikey and Eli were aware of polyamory but never thought it would be something they would explore themselves, until they met Alida.

All of them say they have never felt as complete in a previous relationships as they do now.

The group say they feel that being together has made each of them a better person – particularly when it comes to being in a relationship.

‘The children are aware that our family is special. As the eldest, Linkoln was aware of “normal” relationships but we talked with him openly and honestly. We encourage our kids to be themselves no matter what others think. 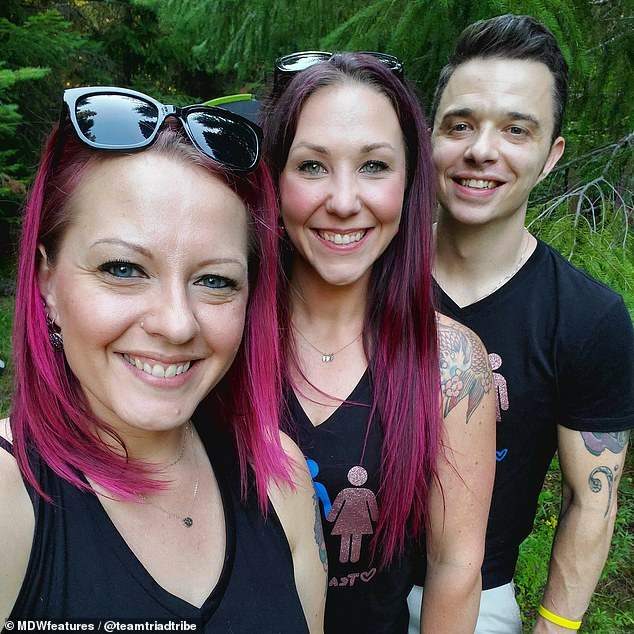 ‘Linkoln has had a friend ask if it was a good or bad thing to have three parents. He said it’s only bad if he’s in trouble.

‘We recognise that there are four relationships within our triad – those with each and also as a whole. We do everything we can to avoid couples’ privilege,’ Mikey added.

‘We check in with each other on a regular basis. It’s a constant learning experience.

‘Sometimes, certain people have less time together due to work schedules and the kids.

‘If someone can’t make it to something though, we always take pictures and fill them in as we really do prefer being together as one. 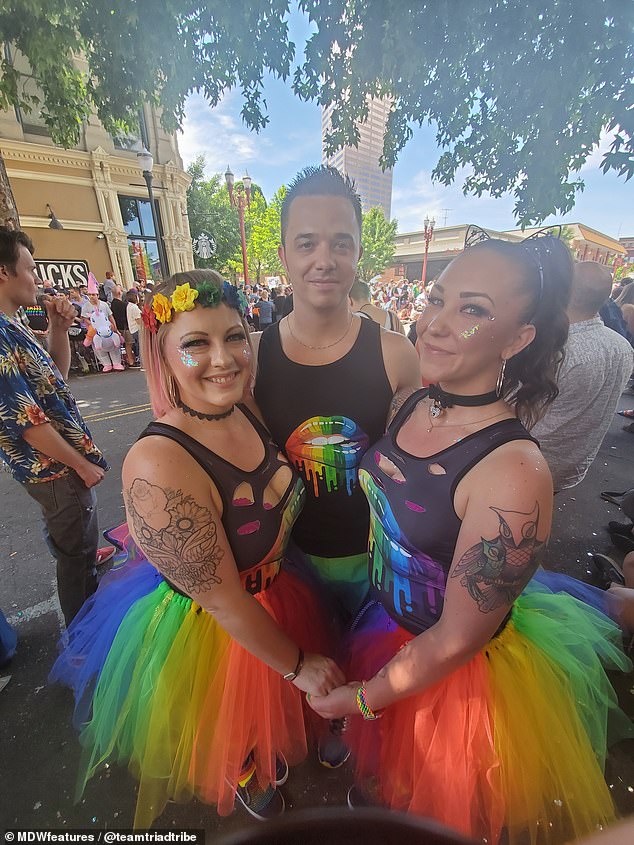 The throuple hope to one day get married in their home state of Oregon and decided to share their experiences to raise awareness of poly rights. They are pictured at a pride march

‘We’re constantly improving our communication – learning how to be engaged and present with each partner in the hard times as well as the good.”

The throuple feel that being together has made each of them a better person – particularly when it comes to being in a relationship.

‘Me and Eli had been married for fifteen years before we met Alida.

‘Being in a relationship since we were basically kids meant that we’d done things we weren’t proud of,’ Mikey said.

‘We’d do dumb things young kids do when they’re trying to figure out how to be adults – argue, break up, and spending money we didn’t have. 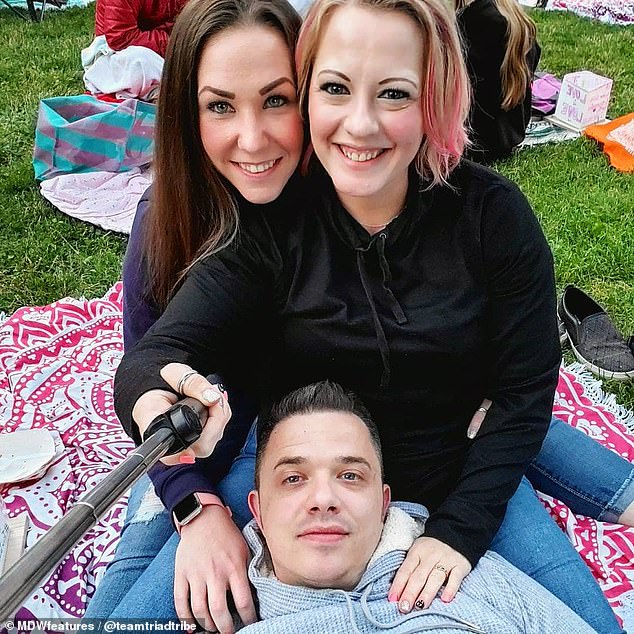 The throuple speak openly about the differences in a polyamorous relationship with their children but sadly not everyone is receptive to the idea. Pictured back to front: Alida, Mikey and Eli

‘When we met Alida, something felt different. We felt this need to be better. We’ve been able to work through some things and create a stronger connection between us all.

‘Alida has brought a different perspective and understanding.

‘We weren’t actually looking for a poly relationship but we just knew that as a group, we wanted to be together.”

Mikey, Eli, and Alida’s own families find the arrangement confusing, but the throuple aren’t put off by the constraints of what is considered to be ‘normal’ in society. 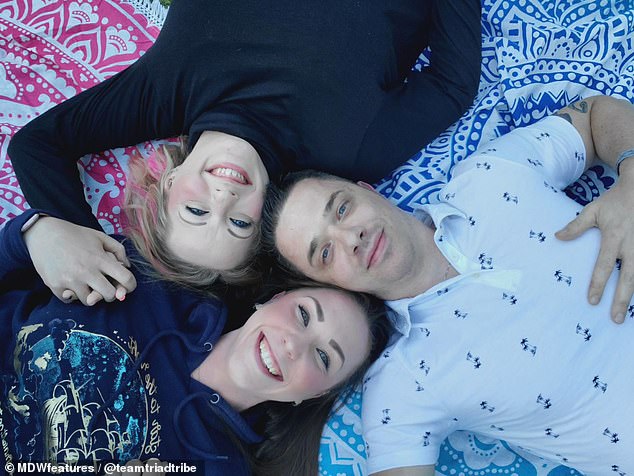 ‘Our families are amazingly supportive. We don’t think our mums truly understand but as long as we’re happy, they are,’ Alida said.

‘We host family get-togethers and continue working on the bonds between our families.

‘We’re just like everyone else. We all want to grow old together – raise our kids, buy a home, travel, retire, and drive Eli crazy until the end.

‘We would love to get married but at this time, that’s not legal in Oregon. We’re hoping that by raising awareness, we might be able to change the rights and be legally married by the state one day.

‘Our relationship requires a lot of communication, dedication, self-reflection, and compromise. It isn’t always easy, but it is always worth it.

‘We are a team and we believe that each of us are equally important.. One day, we’d like being in a polyamorous triad to be more widely accepted.’