Mass gatherings 'should be avoided until a vaccine is developed'

Mass gatherings should be avoided until a vaccine is developed or herd immunity emerges as it is the best way to avoid ‘superspreader events’ at the root of outbreaks, study claims

Avoiding mass gatherings until a vaccine is developed or herd immunity emerges is the best way to prevent the spread of COVID-19, a study claims.

Scientists used computer simulations to model what would happen to the trajectory of the pandemic under various scenarios.

It assessed how restrictions on home life, returning to school or work and ‘other’ interactions, such as at restaurants, concerts or bars, impacted the spread.

Researchers found that with mitigation efforts such as lockdown and quarantine in place, the key to curbing the spread of the disease is to stop ‘superspreader’ events. 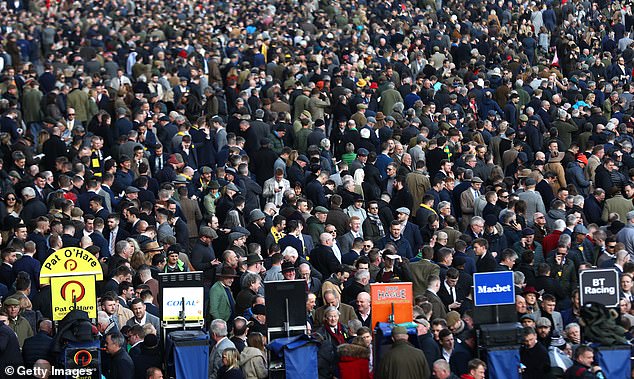 Avoiding mass gatherings until a vaccine is developed or herd immunity emerges is the best way to prevent the spread of COVID-19, a study claims

Academics from the universities of Copenhagen and Roskilde split human-to-human interactions into three categories and inputted them into computer simulations.

If the world was to return to normal, with all restrictions eased, these superspreader events would be a drop in the ocean, making little impact on the spread of the virus.

However, when the R rate is being quashed by unprecedented restrictions on movement and proximity, the superspreader events become key in further flattening the infection rate.

For example, the Cheltenham festival provided perfect conditions for the disease to spread easily.

Writing in their study, the researchers write: ‘The simulations demonstrate that the best strategy is to focus on limiting contacts in the ‘other’ category.

‘This in particular suggests that limiting diffuse social contacts in settings such as bars, transportation, restaurants, parties, concerts and lecture halls is far more effective than limiting the same amount of contact events in the ‘home’ and ‘school/workplace’ setting.’

The research also found that reopening workplaces would not have a major impact on the epidemic.

Allowing the Cheltenham Festival to go ahead in March could have helped ‘accelerate the spread’ of Covid-19, a former government chief scientific adviser has warned.

Sir David King, who advised the government between 2000 and 2007 criticised the decision to allow the National Hunt festival to go ahead which saw a total attendance of some 250,000 across the four days.

The scientific expert described the mass event as ‘the best possible way to accelerate the spread of the virus’.

Avoiding unnecessary ‘other contacts’ is the most efficient way to curb an outbreak.

‘One could snuff out transmission with an effective avoidance of ‘other’ contacts,’ they write.

The scientific model, created by physicists, focuses on restricting the prevalence of superspreader events by cutting down on contact with people from outside the home or the workplace.

This, the researchers say, could help explain why moderate lockdowns, such as seen in Denmark and Sweden, were still successful.

‘It points to the need to avoid mass gatherings until either flock immunity has been achieved or an effective vaccine is available,’ the researchers write.

The study has been published online as a pre-print but has not yet been peer-reviewed, the process where independent experts scrutinise the findings.