When Megan Fox and Kourtney Kardashian teamed up to introduce their boyfriends onstage at the VMAs, they hinted at wanting kids with the rockers.

More babies may be on the way for Kourtney Kardashian and Megan Fox in the future. The ladies attended the MTV Music Video Awards on Sept. 13, and they took center stage to introduce their boyfriends, Travis Barker and Machine Gun Kelly, to the stage for a performance. “New York, I need you to get extra loud for our future baby daddies,” Megan said, while Kourtney continued, “Machine Gun Kelly and Travis Barker!”

It’s no secret that both of these couples are extremely hot and heavy, but this was quite a declaration about the future from Megan and Kourtney. Both ladies already have three kids with their exes, Brian Austin Green and Scott Disick, respectively. However, it looks like they’re ready to expand their families during this new chapter of their lives, as well!

For the VMAs, Kourtney and Megan both turned heads as they packed on the PDA with their guys on the red carpet. Kourt rocked a sexy leather mini dress, while Megan stunned in a nude, sheer gown, which showed off her undergarments underneath. They watched from the crowd as their guys stole the show with an energetic performance of their new song “Papercuts” to close out the show. 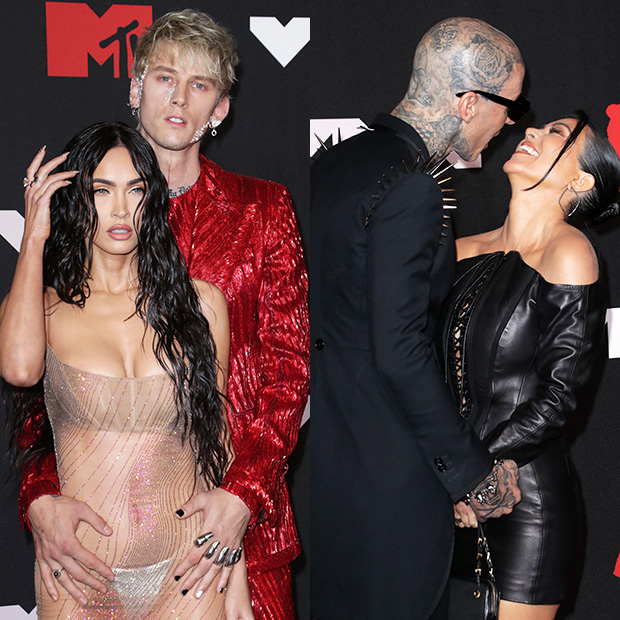 The night wasn’t completely without drama, though. On the red carpet, MGK allegedly got into a scuffle with Conor McGregor. Video from the scene, which was obtained by TMZ, shows Conor being held back by a group of security guards as he seemingly tries to lunge for MGK. The site reports that MGK denied Conor’s request for them to take a photo together, which is what led to the alleged altercation.

It wound up being a great night for the rocker, though. In addition to his buzzed-about performance, he also took home the award for Best Alternative Video for his song “My Ex’s Best Friend.” It was his second nomination and second win at the show — he took home the award in the same category for “Bloody Valentine” in 2020.