Meghan Markle recorded her narration for documentary Elephant last Autumn months before the announcement of Megxit plans, a royal expert has claimed.

Taking to Twitter, royal commentator Omid Scobie penned: ‘Meghan recorded her narration in London last fall and was made aware of the project via mutual friends of the filmmakers (founder Mike Chase) she met in Botswana in 2016.

#Elephant lands April 3 alongside #DolphinReef(voiced by Natalie Portman) on DisneyPlus.’

He added: ‘Despite speculative reporting, Meghan has no further deal with Disney (be it superheroes or animated films!).’ 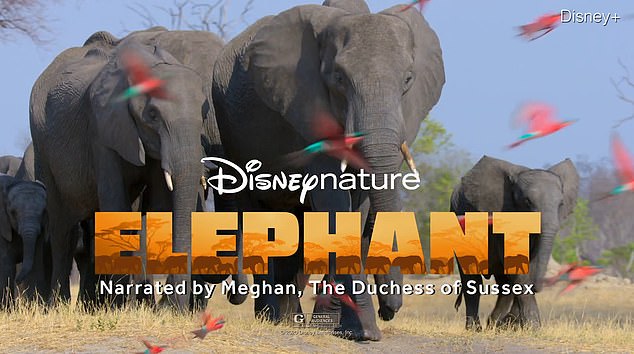 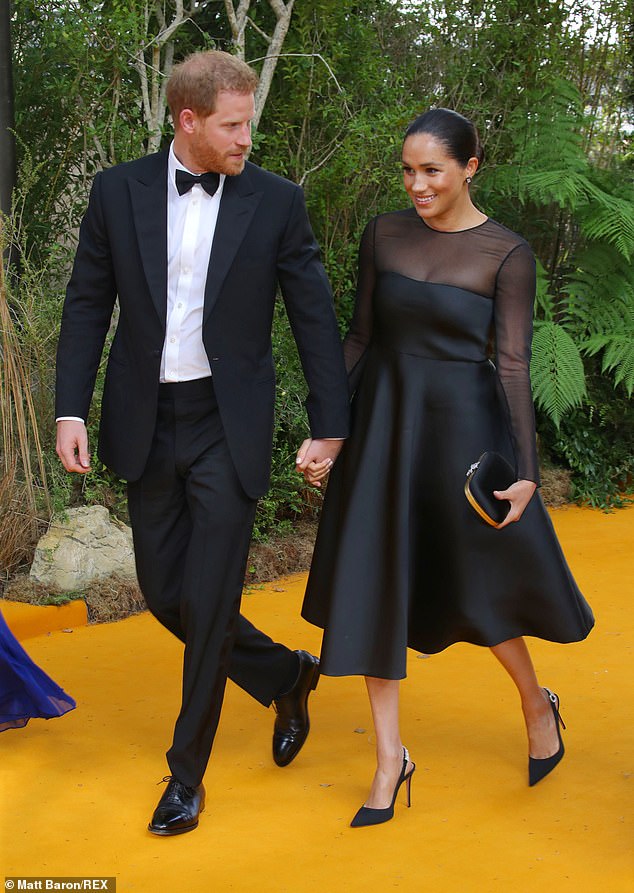 The Duke of Sussex was filmed touting his wife’s voiceover skills to Disney boss Bob Iger at ‘The Lion King’ film premiere in London on 14 July, 2019

The Duchess of Sussex’s first gig after quitting the royal family was revealed  on Thursday.

Her fee for the project is going entirely to the Elephants Without Borders charity – an organisation dedicated to conserving wildlife and helps protect the animals from poaching.

A trailer for Elephant failed to give fans a glimpse of Meghan’s narration – but it did reveal that the story follows a ‘family’s extraordinary 1,000 mile journey across Africa on an adventure that will change their lives’.

It comes after reports the Duke of Sussex, 35, was filmed touting his wife’s voiceover skills to Disney boss Bob Iger at the UK premier of Lion King in July.

In a series of posts, the royal commentator also added that despite speculative reporting, Meghan has no further deal with Disney (pictured)

The royal couple are currently in Canada with their 10-month-old son Archie and are self-isolating in their Vancouver Island waterfront mansion.

The Disneynature documentary will start streaming on April 3 on Disney+, three days after she and Harry quit as senior royals, the company revealed yesterday.

It sees African elephant Shani and her spirited son Jomo as they are led by their great matriarch, Gaia, across the Kalahari Desert.

They will face dwindling resources and vicious predators as they try to follow their ancestor’s footsteps to a green paradise.

Last year, the Duchess joked that she and Harry attended the premiere of The Lion King in London, to ‘pitch’ for work, footage from the event revealed.

The Duke was also filmed touting his wife’s voiceover skills to Disney boss Bob Iger at the occasion in July.

In the video, Prince Harry appeared to point to his wife and said: ‘You do know she does voiceovers?’ A surprised Mr Iger replies: ‘I did not know that’, before Harry continues: ‘You seem surprised, she’s really interested’.

The Disney boss says: ‘We’d love to try. That’s a great idea,’ while Meghan, who was next to Prince Harry, continues speaking to Beyonce.

Meghan gave up a successful career as an actress – with her most prominent role being is US legal drama Suits – when becoming engaged to Prince Harry in 2017.

But the arrangement with Disney hints at Meghan’s future career plans, which could see the couple use their celebrity status to benefit chosen causes.