More than 1800 Australians are stranded at sea on cruise ships as countries close their borders to slow the spread of COVID-19.

The Department of Foreign Affairs and Trade is monitoring around 18 cruise ships located across the globe. 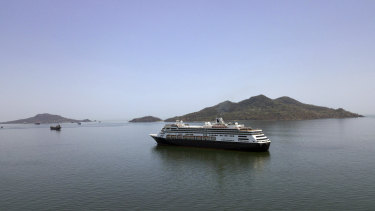 A spokesman for the department would not say when those stuck on the ships could expect to come home, but said communication lines were open.

"DFAT continues to work closely with the cruise industry and cruise line operators to provide advice to Australian passengers on cruise ships with itineraries impacted by COVID-19,"he said.

"DFAT is regularly updating its travel advice, including specific bulletins on cruises."

Elvira Fernandes is on board the MS Zaandam – a cruise ship anchored off the coast of Panama after several countries refused to let it into port.

Four passengers on the ship have died of the virus, while 138 more have reported flu-like symptoms associated with COVID-19.

Ms Fernandes said it was a terrifying experience.

"Four people died on board we were told yesterday at 2 o’clock (PM) and all of us were horrified and shocked," she said.

"There was a lady who was so scared and shocked that she was shaking."

She said passengers had been confined to their rooms since March 22 and have now been told they had to wear masks.

Ramadan Abdullah is also stranded on the ship.

"To be quite honest the experience is just like an Agatha Christie movie, and as a matter of fact I’d like to write a book," he said.

"But the experience is amazing. The captain is a clever young man and he tried to beat the clock in Chile when he got the message that all the land and aerospace had been closed in Chile: he went to Punta Arenas to beat the clock but failed and we really couldn’t make it in time."

As sister ship, the MS Rotterdam linked up with the Zaandam to provide support, with the plan to transfer healthy passengers off the ship.

Mr Abdullah said the number of sick continues to climb.

"It was something like 25 per cent of crew; 28 members and 14 passengers initially, but the number started to balloon," he said.

"But we are still in the bush, there’s nothing certain about where we will disembark. Still a question mark over whether we get through the Panama Canal and they are transferring us by testing us first to make sure we are healthy."

But in some good news on Sunday, Holland America, the company which operates the ships, released a statement revealing it had been granted passage through the canal – however whether it's allowed to dock at its originally planned destination of Fort Lauderdale, Florida is unknown. 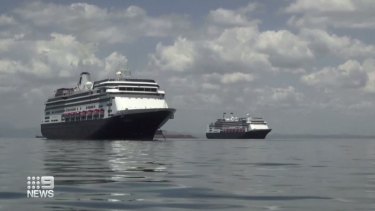 The Zaandam’s sister ship, the Rotterdam, has docked alongside the cruise liner as a rescue vessel. Credit:Nine News

"We are aware of reported permission for both Zaandam and Rotterdam to transit the Panama Canal in the near future," the statement said.

"We greatly appreciate this consideration in the humanitarian interest of our guests and crew. This remains a dynamic situation, and we continue to work with the Panamanian authorities to finalise details."

Closer to home, Australia have cruise ship problems of its own to deal with. 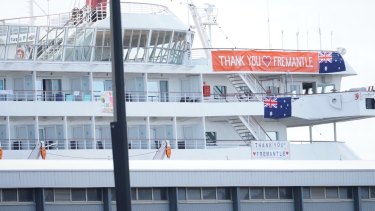 A sign hanging from the Artania cruise ship on Saturday reads ‘Thank you Fremantle’. Credit:Fran Rimrod

Twelve passengers on the ship have, or are suspected of having, COVID-19 and are being treated in Perth hospitals – three are in a critical condition.

The remaining 800-odd healthy passengers, mostly German nationals, have not been allowed to step foot in Western Australia as they wait to be transferred on buses directly to the airport.