The federal government has moved to avoid another defeat in Parliament by sending a draft law on religious freedom to a joint committee of MPs and Senators, after Prime Minister Scott Morrison called in Liberal MP Bridget Archer over her surprise move on Thursday to vote against the Coalition on a national integrity commission.

The new move seeks to avoid a final vote in the House of Representatives next week on the contentious bill to prevent religious discrimination, with Ms Archer and other Liberals urging changes to safeguard the rights of gay and lesbian teachers and students. 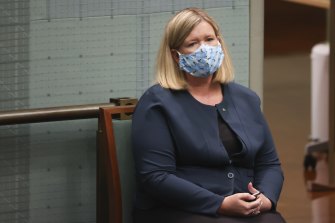 With the government at risk of defeat on bills that split its own side in the lower house, Attorney-General Michaelia Cash wrote to the Parliamentary Joint Committee on Human Rights to ask it to review the Religious Discrimination Bill and report by February 4.

Liberals said this could change the government’s original plan for a vote on the bill in the House before it went to a Senate inquiry over summer, a timetable that would force all lower MPs to decide their position on the disputed changes next week.

The Labor deputy chair of the committee, Graham Perrett, said the consideration by the joint committee meant a vote in the House would not normally proceed because the bill was still being considered by members of the lower house.

“He’s kicked the can of worms down the road,” Mr Perrett said of the outcome for Mr Morrison.

Ms Archer, who crossed the floor on Thursday to vote for the creation of a federal corruption watchdog, was called into a meeting with Prime Minister Scott Morrison and two of his most senior deputies for a frank discussion about her concerns.

The member for Bass in northern Tasmania, Ms Archer voted in support of Independent MP Helen Haines’ bid to create a federal anti-corruption commission, causing chaos in Parliament as the government scrambled to make sure the bill was not allowed to be debated.

Shortly after the vote, Ms Archer was called into a meeting with the Prime Minister, Treasurer Josh Frydenberg and Foreign Minister Marise Payne.

When asked about the meeting, Mr Morrison said it was “very positive and very encouraging”.

“Bridget and I are close colleagues and we have a very good friendship. I was pleased to be there with Senator Payne and Josh Frydenberg and to be there to support Bridget,” he told reporters.

But he rejected a question that suggested they had a “frank exchange” about Ms Archer’s views.

“That is not how I would describe it at all. It was a very warm and friendly and supportive meeting. Bridget is a close friend and colleague. And I wanted to ensure that she was being supported,” he said.

Others in the room said the meeting was not a dressing down but nor was it entirely pastoral care. The discussion was frank and wide-ranging, not limited to the integrity commission issue.

Ms Archer holds the most marginal seat in the country, and last December she spoke out against any plans to send the cashless welfare card trials to Tasmania. She also was the first Liberal MP to announce she would attend the Women’s March in Canberra, after former ministerial staffer Brittany Higgins went public with rape allegations.

Ms Archer tweeted a clarification after a photo of her and Mr Frydenberg in Parliament went viral on Twitter, with users accusing the Treasurer of intimidating her after the vote.

“Thank you to my very good friend Josh Frydenburg (sic) who was checking on my welfare here. Reports that he was lecturing me are in no way true. He is a good person and was being very kind to me,” she tweeted.

The vote was won 66-63 the first time it was put, and 66-64 the second time, but was not carried due to a technicality in parliamentary laws that required an absolute majority of 76 votes to continue.

Five Coalition senators also crossed the floor to support a One Nation bill to oppose vaccine mandates earlier in the week. Mr Morrison said he is pleased his team members speak their minds and stand up for what they believe in.

“I don’t lead a team of drones and warm bodies that I just move around in the Parliament,” he told reporters in Adelaide on Friday.

“I want people in my team to speak their mind. I am not afraid of that. I’m not afraid of members raising issues with me and being strong advocates on behalf of their community, I think that makes our government stronger.

The Joint Committee on Human Rights, which is chaired by Victorian Nationals MP Anne Webster, considered a dispute over freedom of speech and Section 18C of the Racial Discrimination Act in a similar move over summer at the end of 2016 when Parliament could not agree on proposed changes.

The timing of the new referral suggests Parliament will resume on February 7 next year and could consider the report on the Religious Discrimination Bill delivered the Friday before that sitting.