Home » Lifestyle » Naomi Osaka wore a Kobe Bryant jersey after her US Open semifinal win, just weeks after she boycotted a match in his honor

Naomi Osaka wore a Kobe Bryant jersey after her US Open semifinal win, just weeks after she boycotted a match in his honor 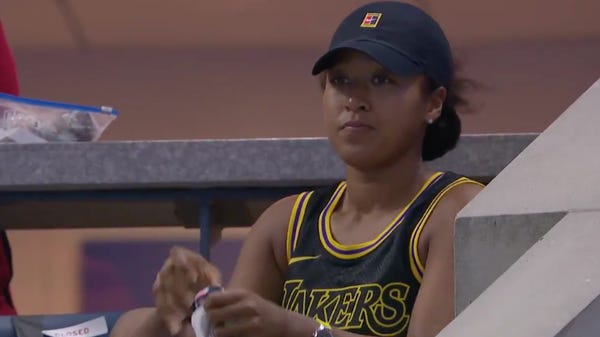 Naomi Osaka was pictured wearing a Kobe Bryant jersey after her US Open semifinal win over Jennifer Brady on Thursday, just weeks after she boycotted a game in the NBA legend's honor.

Osaka wore the special edition "Black Mamba" shirt, which features Bryant's name on the back, while watching Victoria Azarenka beat Serena Williams in the tournament's other semifinal.

The 22-year-old tennis star has long described Bryant, who tragically died in a helicopter crash in January, as one of her biggest role models.

The Los Angeles Lakers icon sat courtside at the US Open last year to watch Osaka during the second round, after which she said, according to Forbes: "He's someone I look up to as an athlete and also as a person. I'm really grateful that I even have the opportunity to talk to him."

Bryant would have turned 42 two weeks ago, and to honour his legacy, Osaka made a bold move in announcing that she would boycott her semifinal at the Western & Southern Open in New York amid growing racial tensions in the US and widespread protests after the shooting of Jacob Blake, a Black man, in Kenosha, Wisconsin.

The tournament instead chose to boycott all matches on that day, with Osaka beating Elise Mertens to advance to the final, from which she withdrew through injury to hand Victoria Azarenka the crown.

"For me, I just always wish that I would do something that [Bryant] is proud of," Osaka told ESPN, as per Forbes, after her semifinal win over Mertens. "And I felt incredibly lucky to have known Kobe and to speak to him on a personal level, so hopefully whatever I do he won't be mad about it and he'd be proud."

Osaka faces Azarenka in the final of the US Open on Saturday.