Home » Lifestyle » NASA has led 7 asteroid-impact simulations. Only once did experts figure out how to stop the space rock from hitting Earth.

NASA has led 7 asteroid-impact simulations. Only once did experts figure out how to stop the space rock from hitting Earth.

An international group of space experts have been bested by a hypothetical asteroid. Again.

In a planetary-defense simulation that NASA led last month, more than 200 participants from about two dozen countries learned that a fictitious space rock was set to strike Earth in six months. They put their heads together to investigate every possible way to avoid the impact. But in the end, the group determined that no existing technologies could stop the asteroid, given the limited warning time in the scenario. The rock ended up razing eastern Europe.

Paul Chodas, manager of NASA’s Center for Near-Earth Object Studies, helped design and host the recent simulation, as well as five previous exercises like it that the agency has hosted since 2013. In total NASA has helped lead seven asteroid-impact scenarios in the last eight years.

“Every one of these has a little different bit of a twist on it,” Chodas told Insider.

But the outcomes have, for the most part, had a worrisome similarity: In all but one, at least part of the incoming space rock has hit Earth.

“There is a certain, you know, morbid aspect to it,” Matthew Holman, an astronomer from Harvard University who participated in NASA’s 2015 and 2019 simulations, told Insider.

The simulations’ grim outcomes reveal how challenging it would be to stop an Earth-bound asteroid in real life — even with years of warning. But the repeated failures in these exercises, experts say, still serve a crucial purpose: They help the world prepare for a crisis like this by teaching governments and scientists how to communicate and share information ahead of an impact.

“It’s what we call a short-warning scenario,” he said. “It was, by design, very challenging.”

But it wasn’t the toughest scenario Chodas has helped to create, and not even the one with the shortest timeframe.

During NASA’s first impact simulation, done in partnership with the Federal Emergency Management Agency, scientists and government officials had to determine what to do about an asteroid the size of the Statue of Liberty that was set to strike in just five weeks. The participants, much like the group last month, found themselves with little recourse given the short lead-up time. They determined it would be impossible to stop that space rock from crashing into the Atlantic Ocean near Virginia.

The resulting tsunami, the participants estimated, would be 50 feet high and devastate a section of the US East Coast.

It was no coincidence that NASA led that first simulation in 2013. In February of that year, a house-sized asteroid entered the atmosphere above Chelyabinsk, Russia. It shattered windows, collapsed buildings, and injured more than 1,000 people. No one on Earth saw it coming. 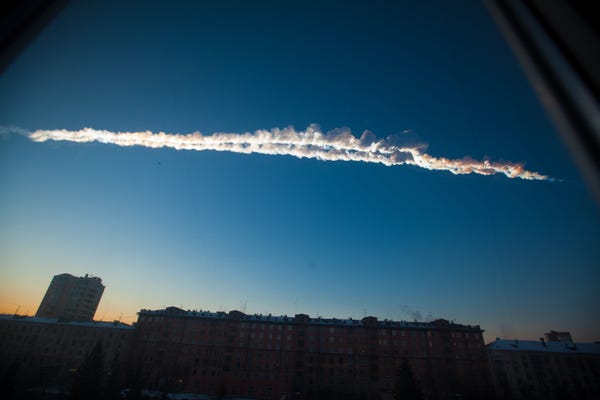 The next year, NASA and FEMA tried again — that time, the fictitious asteroid in the simulation was nearly three times bigger, but it was discovered about seven years before the expected impact.

The earlier a space rock is discovered, the higher the chances that scientists can stymie an impact. The best tools currently available are nuclear explosives that could be detonated near an asteroid to break it into less dangerous chunks, and spacecraft that could slam into an asteroid to knock it off its trajectory.

NASA is about to test that latter technology with its Double Asteroid Redirection Test (DART) mission. In the fall of 2022, a NASA probe is set to fly to the asteroid Dimorphos and purposefully hit it. 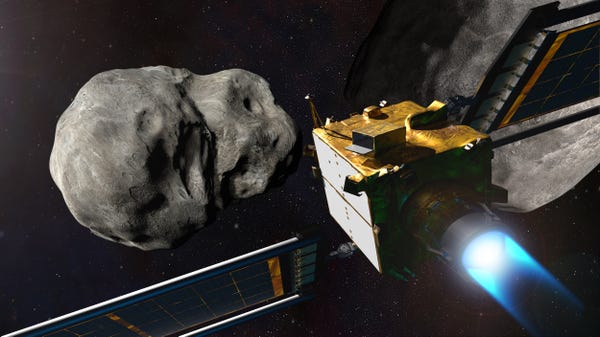 Chodas thinks five years’ warning is the absolute minimum to successfully deploy one of these options, though other experts suggest we’d need at least a decade to plan, build, and launch an anti-asteroid mission from scratch.

Brent Barbee, an aerospace engineer at NASA’s Goddard Space Flight Center, told Insider that no spacecraft that could serve this purpose is just sitting “ready to go and dance.”

“It has to be built on demand,” Barbee said.

The advanced notice in NASA’s 2014 simulation enabled the participants to do just that. They sent a spacecraft to ram into the asteroid and deflect it away two years before it hit.

But even then, a 164-foot chunk of the asteroid broke off because of the spacecraft’s force, and the rock started heading for Texas’ Gulf Coast. Two years wasn’t enough time to launch another deflection mission, so once again, Earth took a hit.

In one simulation, an asteroid fragment wrecked New York City

By 2015, NASA had looped in space agencies from several other countries to participate in its exercises. The first simulation with this international group was similar to the prior year’s: After successfully deflecting an asteroid spotted seven years in advance, the participants found they couldn’t stop a fragment of the rock from hitting India. It exploded with the force of a small bomb. 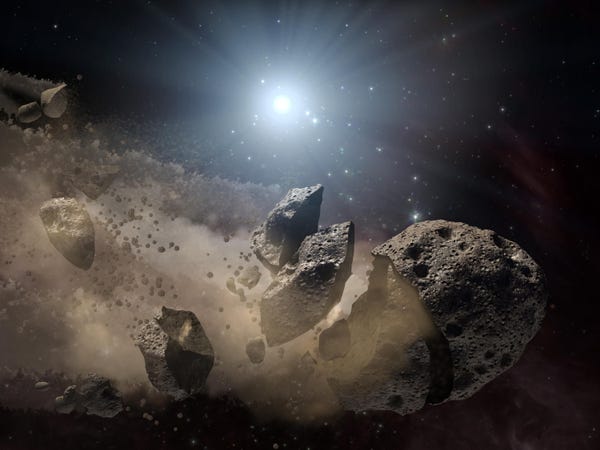 Chodas calls this outcome “asteroid splitting.” It’s no accident splitting has appeared in multiple exercises, he said, because he thinks “it’s very conceivable something like that happens.”

Ideally, Chodas added, asteroid-deflection missions would be adaptable and able to retarget any unpredictable pieces that break off.

By now, you’re seeing the pattern: In a 2016 NASA simulation, the group was also unable to stop an asteroid, even though it was spotted four years in advance. The 400-foot space rock would, the participants estimated, impact a 325-square-mile area near Pasadena, California.

During the 2019 exercise, experts decided to try to stop a hypothetical asteroid from hitting Denver, Colorado, by crashing into it with several spacecraft. That wound up changing the asteroid’s path, but in the process, a 262-foot chunk of rock broke off and struck New York City.

Chodas described that exercise as “a worst-case scenario” — it ended with Central Park decimated by a fireball that released as much energy as an atomic bomb. 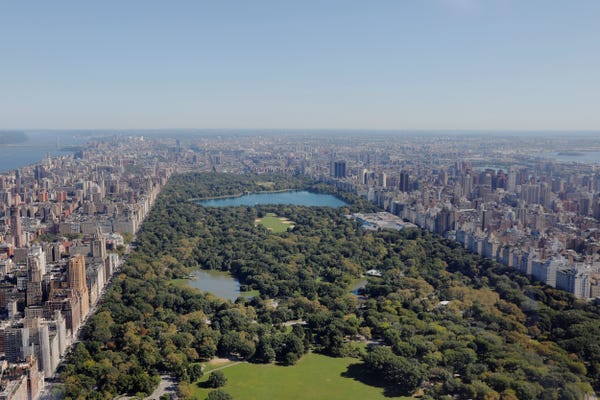 In last month’s simulation, the Czech Republic and Austria didn’t fare much better.

Humanity’s big — and only — win in these exercises came during the 2017 one, in which the participants spotted an Eiffel Tower-sized asteroid 10 years in advance. After sending a scouting mission into space, scientists discovered that it was actually two space rocks orbiting each other. This is known as a binary asteroid. NASA gave the simulation that curveball, Chodas said, because one-third of asteroids tend to be binary.

Rather than ramming a spacecraft into that asteroid pair, the experts chose to blow them up with nukes — and succeeded. 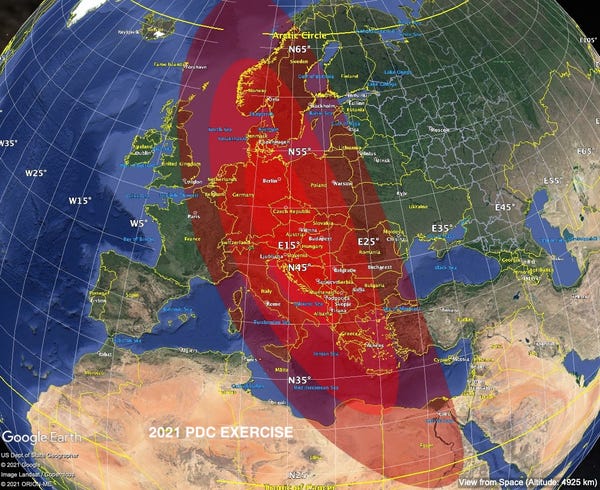 Since 2013, these simulations have enabled experts to practice how they’d communicate with one another and with the public ahead of an impact. They think through how they’d facilitate evacuations, what they’d say to keep the public calm and informed, and how to responsibly share information between governments.

Holman said that each successive NASA exercise has improved on its predecessor.

“People have absolutely gotten better over the years,” he said, adding that more and more countries participate every time.

In particular, scientists have refined their ability to use a hypothetical asteroid’s size, rotation, and orbital path to predict where it will hit and how much damage it will do. Those assessments can help governments decide how to best reduce the severity of an impact and move the right people out of harm’s way.

The simulations have also revealed that such assessments change quickly as scientists learn about an incoming asteroid. During the earliest stages of an exercise, the possible impact location could be anywhere on the globe, Barbee said. That estimate shifts as the simulation progresses, so data might then suggest an asteroid will crash into Africa, only to point to Europe as the most likely target soon thereafter.

“I’m glad we’re discovering those sorts of things now by working through the details of simulated scenarios before being confronted with an actual scenario,” Barbee said.