The US space agency NASA has been aware of infrequent outbursts from the double star system V745 Sco. Astronomers have estimated V745 Sco is located approximately 25,000 light-years from our planet.

V745 Sco is a binary star system made up of a white dwarf and red giant star stuck together by gravity.

An extraordinary amount of energy was released during the explosion, equivalent to about 10 million trillion hydrogen bombs

These two cosmic entities orbit so closely around one another the outer layers of the red giant are pulled away by the intense gravitational force of its partner.

Scientists now understand the resulting material slowly falls onto the surface of the white dwarf.

And gradually, enough material may accumulate on the white dwarf to trigger a colossal thermonuclear explosion. 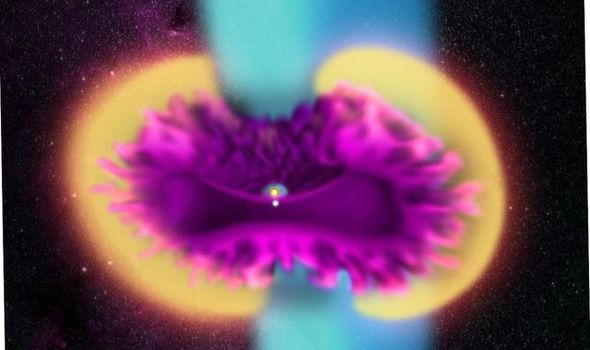 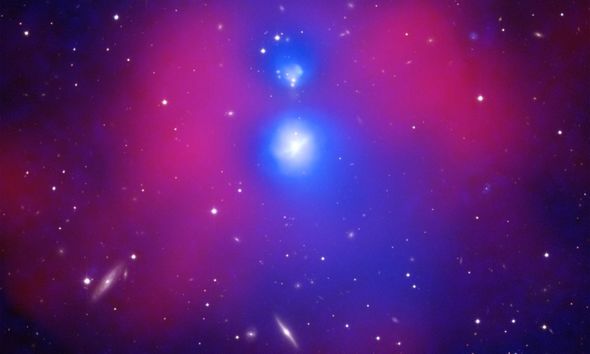 This is so powerful the extraterrestrial explosion can create a startling brightening, known as a nova.

Astronomers saw V745 Sco fade by a factor of a thousand in optical light over the course of only nine days.

In 2014, astronomers finally got their chance to witness the phenomena, via NASA’s Chandra X-Ray Observatory.

They discovered most of the material ejected by the explosion was apparently moving towards Earth.

NASA developed a sophisticated 3D computer model of the explosion to help explain the observations. 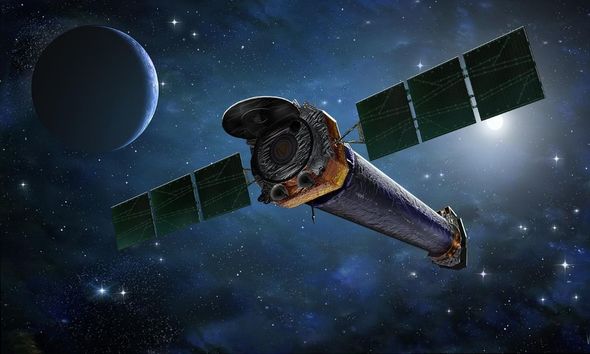 In this model, NASA included a large disk of cool gas around the equator of the binary.

This is caused by the white dwarf pulling on a wind of gas streaming away from the red giant.

In the figure showing the new 3D model of the explosion, the blast wave is yellow, the mass ejected by the explosion is purple.

The disk of cooler material, mainly unaffected by the blast wave effects, is blue.

NASA said: “An extraordinary amount of energy was released during the explosion, equivalent to about 10 million trillion hydrogen bombs.”

The Chandra X-ray Observatory is the world’s most powerful X-ray telescope.

It has eight-times greater resolution and is able to detect sources more than 20-times fainter than any previous X-ray telescope.

The Chandra X-ray Observatory is part of NASA’s fleet of Great Observatories. 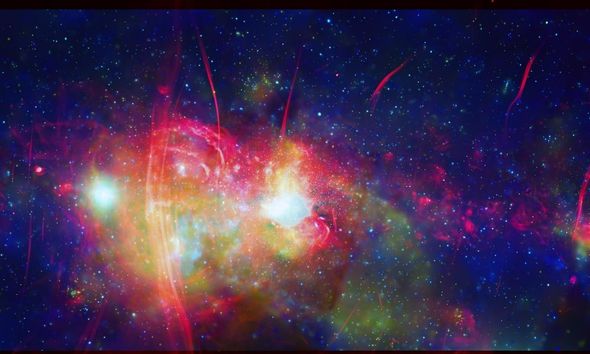 Chandra allows astronomers to obtain X-ray images of exotic environments to help understand the structure and evolution of the Universe.

The “X-ray Universe” refers to the universe as observed with telescopes designed to detect X-rays.

X-rays are produced in the cosmos when matter is heated to millions of degrees.