A new species of iguana has been identified in the Caribbean after scientists analysed the DNA of individuals thought to be an introduced South American variety.

The Southern Antilles iguana, which lives on St Lucia, St Vincent and the Grenadines, was shown to form a distinct genetic group.

Known to humans for centuries, it was also found to have unique bodily features including horns on its nose, a high crest and dark brown eyes.

It is the fourth iguana type to be identified in the region in two years, as zoologists tear up the rule-book from previous research, which had classified each as the common green iguana. 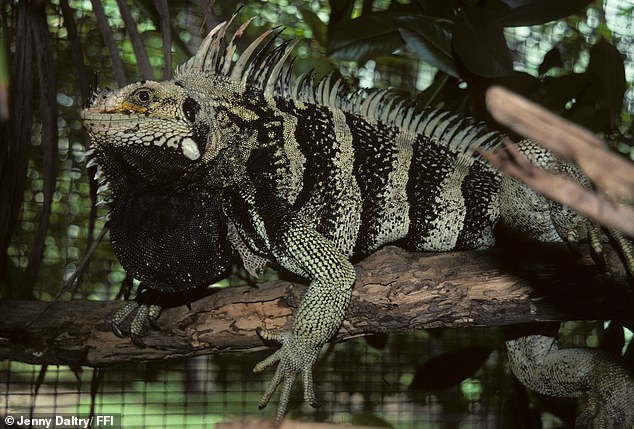 Southern Antilles iguana: The species has been identified from two other varieties – or subspecies. Pictured above is a very rare Saint Lucia iguana, identified by its black bands. This has been named a subspecies of the new species. 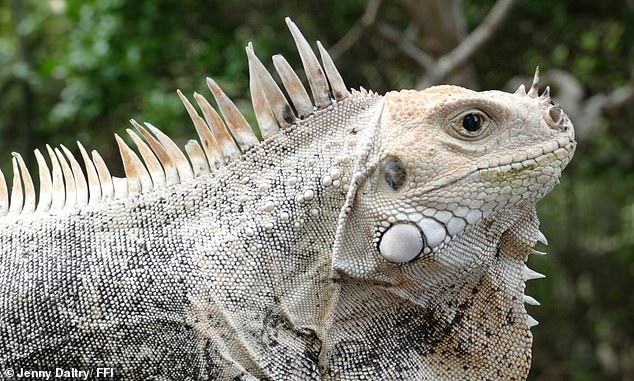 Southern Antilles iguana: This is an older individual in the new species. It is also part of a subspecies, the Grenadines pink rhino iguana, Iguana insularis unsularis, which turns a pinkish white in old age

Two types identified last year, the very rare Saint Lucia iguana and Grenadines pink rhino iguana, have been named as variations of this species – or subspecies.

The former is identified by broad black bands across its body while the latter turns pinkish white in old age.

Zoologists think they may have overlooked the species previously as their juveniles are bright green, just like those of the invasive species, making them ‘virtually indistinguishable’ until they reach adulthood.

FFI senior conservation biologist Dr Jenny Daltry heralded the find as a breakthrough, but said more action must be taken to protect the reptiles.

‘Caribbean iguanas are in grave danger because of invasive alien species, habitat loss and over-hunting for bushmeat and the pet trade,’ she said. ‘We know what needs to be done.’ 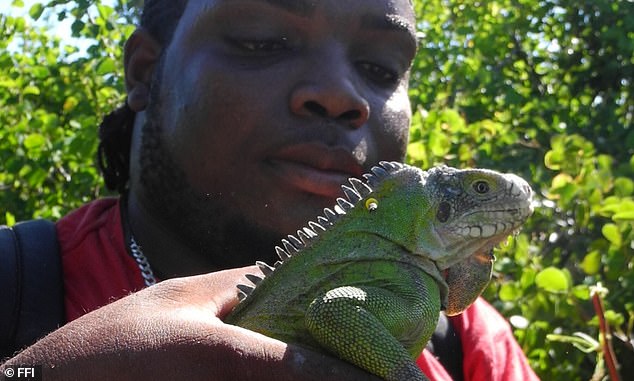 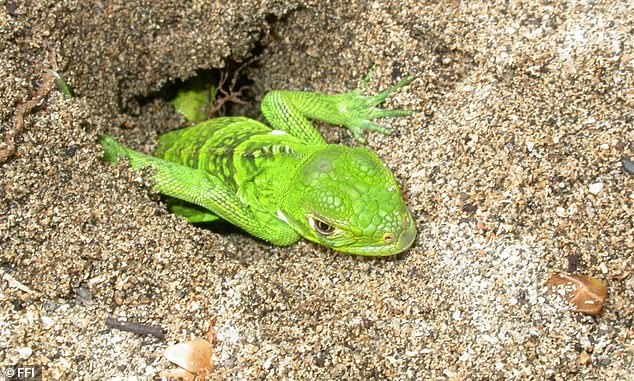 Scientists think they may have missed the species as they look identical to the invasive common green iguana, Iguana iguana, when they are juveniles

What is the Southern Antilles iguana?

The Southern Antilles iguana is a new species identified by scientists at Fauna and Flora International (FFI).

It was separated due to a unique genetic profile and distinguishing features, which include horns on the nose, a high crest and dark brown eyes.

The St Lucia iguana, identified by black bands on its body, and Grenadines pink rhino iguana, which turns a pinkish white in old age, have been named as subspecies.

Initially only two species of six-and-a-half-foot iguanas were known in the Caribbean – the critically endangered Lesser Antillean iguana and the introduced common green iguana.

But that changed last year when scientists identified the Saint Lucia iguana, which has broad black bands on its body, and the pink rhino iguana, which turns pinkish-white in old age.

In April this year a fifth was added when the very dark reptiles living on Montserrat and Saba were identified as the melanistic or Saban black iguana.

All the species are threatened by the introduced common green and Central American horned iguanas, which can cross-breed with them and out-compete them for resources.

Both arrived on the islands after they were discarded as pets, swept ashore by hurricanes and through stowing away on cargo boats.

The invaders also breed faster than the natives, meaning there is a risk they will be outcompeted for access to resources. 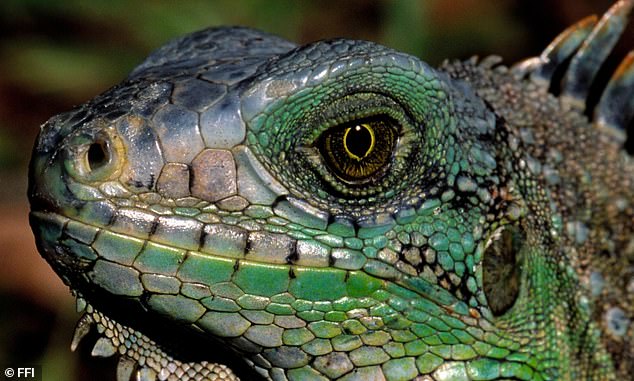 Common green iguana: They were initially identified as this species, which has invaded the islands and can cross-breed with native populations 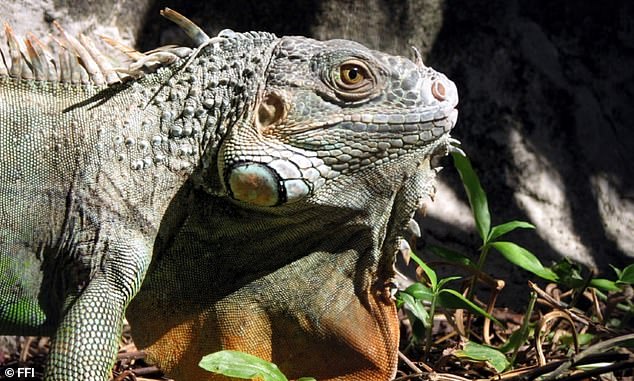 Horned iguanas: This species hailing from Central America has also invaded the Caribbean

Saint Lucia used to be called ‘Iyanola’. meaning land of the iguanas, revealed the head of wildlife at the Saint Lucia forestry department, Pius Haynes.

But the reptiles have been in decline as their natural habitat is removed by humans and they are hunted for meat and as pets.

The new designation gives them better protection under CITES, making it harder to export the native iguanas.