The Burmese python, green iguana and lionfish are, by now, well-known invasive species that have established a dangerous foothold in Florida. But a fearsome new invasive predator has emerged in the state: the arapaima, a monster fish that can grow up to 10 feet long and weigh hundreds of pounds.

A dead one recently washed ashore in Cape Coral’s Jaycee Park along the Caloosahatchee River, which runs from Lake Okeechobee west to the Gulf of Mexico.

The arapaima is native to the Amazon River in South America and is one of the world’s largest predatory fish. Its scales are said to be as impenetrable as armor.

And it’s ugly, at least to most people. 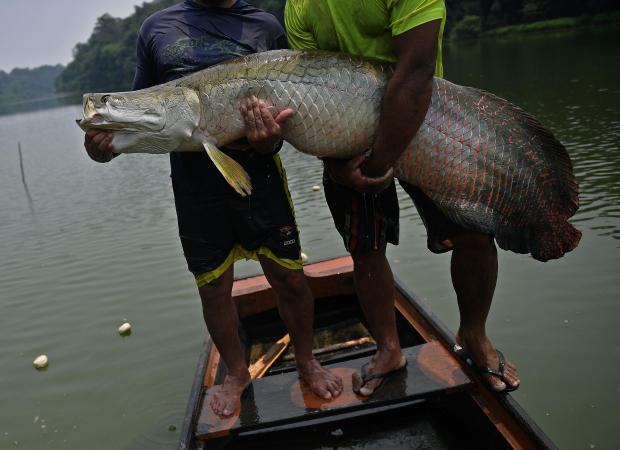 Constantine said the arapaima might be the closest thing to a tarpon, which is a big, athletic fish native to Florida’s waters and a popular species for game fishermen. Like tarpon, arapaima are capable of jumping out of the water for food and their prey include small mammals, lizards, birds and other fish.

But Constantine is also aware of the reality of the arapaima’s appearance in Florida, which was confirmed by the Florida Fish and Wildlife Conservation Commission.

“I can’t imagine it’s good for our ecosystem,” he said.

And he’s right. The arapaima, because of its varied and voracious appetite, is a threat to native Florida wildlife. It is also capable of producing hundreds of thousands of eggs during its lifetime.

But that apparently hasn’t happened here.

“There is no evidence that arapaima have reproduced in the wild in Florida,” the FWC said in an email.

John Cassani, head of Calusa Waterkeeper, a nonprofit group dedicated to protecting waterways in the region, agreed, writing in an email that it “would seem unlikely as sightings are rare and this one may be unique to the Caloosahatchee River.”

The FWC said the arapaima habitats are limited by their sensitivity to cool water – they can even die in water that’s 60 degrees or colder. However, they could survive in the waters of extreme southeast Florida.

Dr. Katherine Galloway, a biologist at Nicholls State University in Louisiana and an expert on lionfish, said arapaima lay eggs in February, March and April, so it potentially could take them longer to establish a presence. Lionfish were quick to establish an invasive presence in Florida, she said, because females can produce egg masses every four days and can release up to two million eggs a year.

But Galloway had an ominous warning about the arapaima. If a large, reproductively active one was found, “there is likely more in Florida,” she said.

And like lionfish, arapaima feed on commercially important fish, increasing their threat to the economy.

State wildlife officials ask anyone who catches or sees an arapaima or other nonnative freshwater fish species in the wild to call the Exotic Species Hotline at 1-888-IVE-GOT1 (1-888-483-4681), report it through the FWC’s I’ve Got 1 App or report it online at I’veGot1.org.

The FWC said to make sure to take a photo, if possible, and provide the location, date and time of the sighting. Non-native fish should be humanely killed and never released alive back into the water.

How the dead arapaima got to the Caloosahatchee River remains a mystery. There’s a chance someone had it as a pet and released it into the wild.

Or, Constantine suggests, “someone could have brought it here already dead and let it go just to start some (expletive). There’s no telling. We don’t know.”