Home » Lifestyle » News Corp not acting for Devine, so lawsuit may be served ‘personally’ in US

News Corp not acting for Devine, so lawsuit may be served ‘personally’ in US

Lawyers for a nine-year-old Indigenous boy who is suing Daily Telegraph columnist Miranda Devine for defamation may be forced to serve legal documents on her in the United States, where she is on secondment, because her Australian employer will not accept them on her behalf.

Quaden Bayles, who has achondroplasia dwarfism, is suing Devine for defamation over a series of tweets from her Twitter account in February this year that raised questions about whether a viral video in which he cried after being bullied at school was "a scam" to make money. 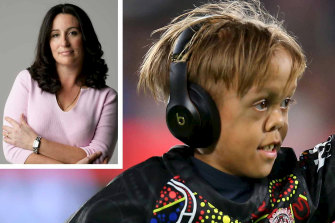 Quaden Bayles is suing Miranda Devine over comments made on Twitter.Credit:SMH

The case was brought on his behalf by his mother Yarraka, who is also suing Devine in her own right for suggesting she "coached" Quaden. Devine has yet to file a defence or acknowledge the claim.

The lawsuit also names News Corp subsidiary Nationwide News, the publisher of The Daily Telegraph, as a defendant. The statement of claim alleges the company is responsible for the tweets as Devine's employer.

But Ashurst partner Robert Todd, acting for Nationwide News and not Devine, told the Federal Court last week the company's position was that the tweets were "private" and unrelated to material it published.

The Bayles family's lawyers applied to the Federal Court Justice Anna Katzmann for orders about serving the documents on Devine while she is in the US, working on secondment at the The New York Post.

Their preference was for service of the documents to be "deemed" to have occurred when they were sent to two email addresses listed by Devine online, including a hotmail account and an official News Corp address.

However, Justice Katzmann said "no evidence" had been provided about the source of information about Devine's work email address, or the date the documents were emailed.

Alternatively, lawyers for the family sought leave to serve the documents on Devine using the Hague Convention, a treaty which allows legal documents to be served personally on people in other countries that are party to the convention.

Justice Katzmann said the Bayles' lawyers were keen to avoid using the Hague Convention because it may take months, but "no evidence was adduced" about the likely timeframe.

In an affidavit, a lawyer for the Bayles family said resolving the case on an "urgent basis" would assist Quaden, who was diagnosed with critical respiratory failure late last year and is in the care of the Paediatric Palliative Care Unit at Queensland Children’s Hospital.

Quaden and his mother had also received death threats following a "false and malicious internet conspiracy" and he was suffering from Post-Traumatic Stress Disorder and anxiety, the lawyer said.

But Justice Katzmann said no medical evidence had been provided to support those claims.

Justice Katzmann said she was "not satisfied that it is not practicable to serve Ms Devine personally" in the US, but she would "happily revisit" the application for deemed service if further evidence was provided, including medical evidence. In the meantime, the family's lawyers may serve the documents on Devine under the Hague Convention.