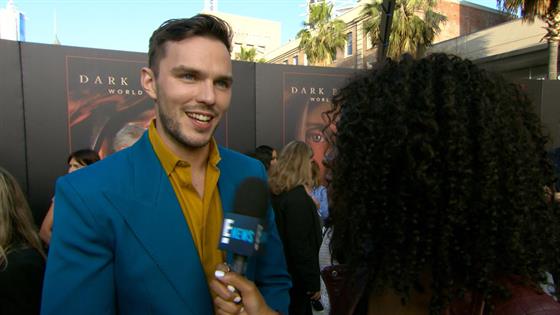 When it comes to his private life, Nicholas Hoult tends to keep it exactly that—private. However, the 30-year-old actor made a few rare comments about his life as a dad during Monday’s at-home edition of The Late Late Show.

“I’m loving it,” he said when asked about fatherhood. “It’s mad. It’s a learning curve, isn’t it? There’s a lot to take in. But overall, it’s like that time again, it brings back a lot of memories of your childhood. It makes you play again—which I’m really enjoying, particularly with this time now with everything shut down and not having to work I’m kind of just playing trains all day. Yeah, it’s great.”

The X-Men star also brought up his child after James Corden asked him about his first role, which the celebrity took on at age 3 for a play. The late-night host said he didn’t know how it was possible to act in a play at such a young age.

“I don’t understand it now looking at my little boy,” Hoult said. “How do you convince the kid to do what you want them to do, like designate a time on stage? Because I can’t convince him to do anything. “

People reported Hoult welcomed a baby with Bryana Holly in 2018. However, the child’s sex and name were not immediately revealed.

“Someone will find out soon enough and that’s fine, no big deal,” Hoult told ES Magazine in 2019 in regard to the former, “but for now it’s my own precious little thing and I’m keeping it.”

While fans still don’t know the little one’s name, one thing is for sure: Becoming a dad has been a life-changing experience for the Mad Max: Fury Road celeb.

“Having a baby puts you in this place where you go, oh, okay, this human is going to change a lot,” he told ES Magazine. “It makes you value time differently, which is why I talk very quickly in interviews now, because I need to get home to them.”

Watch the video to see the rest of his interview.