NSW Health allowed passengers from the Ruby Princess to disembark in Sydney despite knowing that test results, which would prove whether or not coronavirus was present among sick passengers, would be available within hours.

Leaked emails between NSW Health and the ship's senior doctor show arrangements had been made for 15 samples taken from sick passengers to be tested for COVID-19 and the results would be known on the same day as its March 19 arrival. 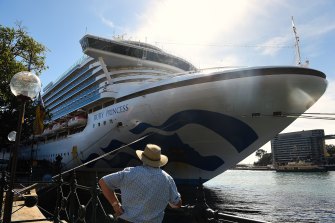 The Ruby Princess cruise ship at the Overseas Passenger Terminal in Circular Quay on March 19, the day passengers disembarked,Credit:Kate Geraghty

Responsibility for the debacle has sparked a war of words between the state and federal governments as well as the cruise ship owner, Carnival. NSW Police announced on Friday it had launched an investigation into the decision to allow the passengers to disembark.

NSW Premier Gladys Berejiklian has accused the ship's operators of being less than truthful about the health of patients on board.

According to an email obtained by the Herald, the ship's doctor told NSW Health on March 18: "We have collected viral swabs for a few cases of 'febrile, influenza test negative' individuals and have kept the guests isolated. Please advise on how to proceed on these guests, and whether you will be processing these tests tomorrow." 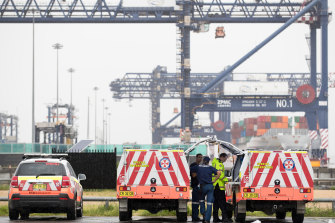 A sick crew member is removed from the Ruby Princess on Thursday afternoon.Credit:Janie Barrett

NSW Health replied that afternoon saying: "The NSW Health expert panel has assessed the Ruby Princess as NOT requiring on board health assessment in Sydney."

NSW Health asked for the 15 samples taken on board to be sent to its labs for COVID-19 testing.

"You are free to disembark tomorrow … I will let you know when the results are received – likely tomorrow afternoon," NSW Health replied.

All passengers were asked by federal authorities to self-isolate for 14 days after they left the ship.

The 15 tests revealed that three passengers and one crew member had the virus but, by then, 2647 passengers had left the ship, returning to their homes across Sydney, interstate and overseas. A total of 622 have now tested positive for COVID-19, including 342 in NSW.

"Transmission of COVID-19 amongst these passengers could not have been prevented by NSW Health staff," NSW Health said in a statement. "No cases of COVID-19 were identified on board the ship before it docked.

"The vast majority of these passengers reported they did not develop symptoms until after leaving the Ruby Princess."

NSW Health said that overseas experience had shown that coronavirus "can spread among passengers if left on board, so self-isolation at home is a much safer option than leaving passengers on board.

"NSW Health had prepared plans in the event of COVID-19 being identified on a cruise ship," a spokeswoman said.

"On this particular voyage, it was known that influenza activity had been identified on the ship."

"The Ruby Princess was assessed as low risk, based on the level of illness on board, the negative COVID-19 tests done on passengers while in New Zealand, and the positive influenza tests done on a large proportion of the passengers with influenza like illness."

NSW Health said that, as of Friday, "probable secondary transmission has been limited to 11 confirmed cases".

The Ruby Princess remains off Port Botany and is expected to remain in NSW waters for some time with health concerns among its 1100 crew members and the decision to allow passengers off the ship is now the subject of a NSW Police investigation.

Two other Carnival ships – the Pacific Explorer and the Carnival Splendour – have departed for international waters to await further instruction. Five other ships, all Royal Caribbean vessels, will leave on Sunday, ending an impasse between the cruise ship companies and NSW authorities that has lasted for more than a fortnight.

Professor Natalie Klein, a law of the sea expert from the University of NSW, said that, under the Maritime Labour Convention, Australia was required to provide medical assistance to crews equivalent to onshore.

"If Australia can provide medical assistance on board ships, they don't have to come off and there will be fewer brought into hospital. We can exercise some control about who comes off the vessel," she said.

Australian Border Force officials and staff from private health company Aspen on boarded the ship on Thursday to assess the crew’s health and medical facilities on board, after Home Affairs Minister Peter Dutton accused the parent company Carnival of "lying" and Ms Berejiklian said staff on board might have misled NSW Health.

"Nothing could be further from the truth," Carnival said in response to the Premier’s comments.

NSW Police Commissioner Mick Fuller said on Friday it was too early in his investigation as to whether criminal charges could be laid in relation to the Ruby Princess but that police were reviewing documentation and triple zero calls.

"There certainly have been inconsistencies in information coming off the ship," Mr Fuller said.

NSW recorded 91 new cases of coronavirus on Friday, bringing the state's total of confirmed cases to 2389.

Friday was the first day the number of new cases recorded was under 100 since March 21, which NSW Chief Health Officer Kerry Chant said was "pleasing to see".

The deaths of a Wollongong man and an Albury woman, both in their 70s, on Friday, brought the state’s death toll from coronavirus to 12.

Looking for some good news?

We could all do with some good news right about now. That’s why we have launched The Good News Group, a Facebook group where we’ll share uplifting, inspiring and positive stories and invite members to do the same. Join the group here.