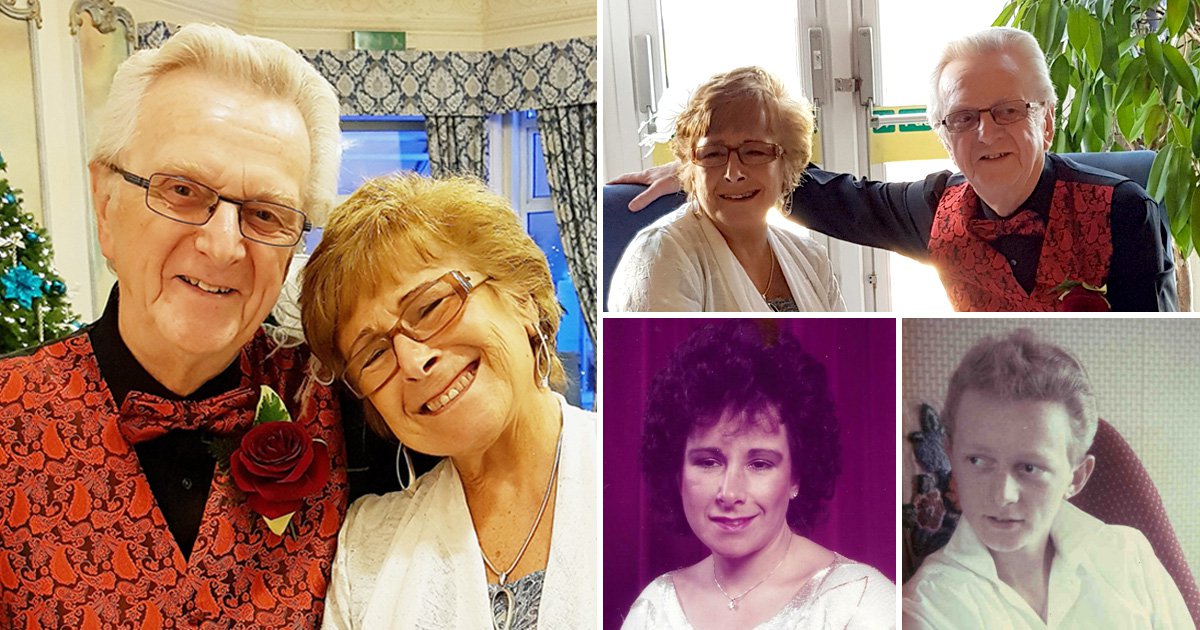 A couple who met in the laundry room of their retirement complex have tied the knot in their seventies – proving that love has no age-limit.

walking down the aisle to ‘Stayin’ Alive.’

When 74-year-old Sharon Kalmus-Brown’s first husband Ronnie died aged 80 in January 2017, she never thought she would meet anybody else.

Sharon had been with Ronnie for 50 years.

But then, just before Christmas 2017, Peter, 77, struck up a conversation with her as they spun their delicates in the laundry room of their retirement complex in Paignton, Devon.

Having also lost his partner Betty, aged 83, earlier that year, finding love again was the furthest thing from his mind, and initially, the pair were just friends.

Just a few months later, in March 2018, they realised they had fallen for one another, eventually getting married at a local hotel in front of 45 loved ones in December 2019.

‘I was very happily married to Ronnie, and I never thought I’d find someone else,’ says Sharon.

‘I’m one of the very few people lucky enough to have had a wonderful marriage and now I’m very happy again with Peter.

‘I know Ronnie would have wanted me to find joy again.’

Previously, Sharon lived in Leigh-on-Sea, Essex, before she decided to move into the FirstPort retirement complex in 2016, to be closer to her family.

The following year, she was devastated when Ronnie passed away from cancer.

That December, feeling low as she faced her first Christmas as a widow, she was cheered when Peter, originally from Hereford, Herefordshire, struck up a conversation with her in the laundry room.

‘Peter had moved in to the FirstPort complex in November 2017, about a year after me,’ she says.

‘We were both on the third floor, so we had the same day for the washing. We just got chatting and had a lot in common. I thought he was a very nice man.’

As they spoke, Sharon discovered that Peter, who had been married twice before, had also suffered a recent loss.

Bonding over a shared sense of humour, they began to look forward to running into one another.

And when she returned home after visiting family over Christmas, it was clear he was pleased to see her.

‘After I lost Ronnie, my son was marvellous and made sure I didn’t have time to be lonely – but I wanted my own life, and not to be the nana who just babysat.

‘I wanted to go dancing again and go on holiday. I’m not the type to sit there knitting – I don’t do knitting!’

In March 2018, Sharon and Peter bumped into one another in the local bank and, on the suggestion of a friend from their retirement complex, she invited him to lunch at the nearby Palace Hotel.

‘We sat across the table from one another and I realised I was nervous,’ admits Sharon.

‘The first time we went for lunch he even wore a tie.’

Though neither of them had ever expected to enter a new relationship, later that month, Sharon and Peter became a couple.

Soon, they were going out for dinner and dancing together every Monday night. They also enjoyed days out and jaunts to the seaside together.

By 2019, they still lived in separate apartments, and would visit one another every afternoon and again in the evening to watch their favourite TV shows together.

After running it by their respective children, who were delighted at their newfound happiness, they decided to get engaged in October 2019.

‘We wanted to move into a new apartment together, so we decided we’d better get married,’ says Sharon.

‘Peter even got down on one knee – but he did ask me to give him a hand to get back up afterwards.’

On December 1, 2019, they got hitched at the Palace Hotel – where their romance had first begun – walking down the aisle to the Bee Gees hit Stayin’ Alive.

‘We had about 45 guests, including lots of friends from the retirement complex,’ says Sharon.

‘One of the ladies who lives there said to me, “I’m used to going to funerals – I haven’t been to a wedding for a long time.”‘

The ceremony was followed by a cream tea and sandwiches, and in the evening the couple had 19 close friends and family join them for a meal with music and – of course – more dancing.

‘It was such a special day,’ says Sharon. ‘We just partied on and on. We did the conga and everything. The entertainer had to ask us to go to bed.’

The newlyweds then jetted off to Tenerife for a three-week honeymoon.

‘We sat by the pool collecting wrinkles. It was wonderful,’ recalls Sharon.

‘We hired a two-seater scooter for excursions, riding up and down the promenade on it.

‘Everyone we passed by, we did a royal wave. Everyone was laughing – it was fabulous.’

Now living together in a new flat within the FirstPort managed complex – this one with a stunning seafront view – the pair are settling into married life and have even taken lockdown in their stride.

Hoping to both receive their Covid-19 vaccines soon, they plan to spend more time travelling and enjoying their beach hut together.

‘We’ve hardly been out since the first lockdown in March, but it’s been fabulous,’ says Peter.

‘We’ve played music and laughed and joked – you can’t ask for better. Sharon’s just lovely and full of fun.

‘We’re certainly not your average couple in their seventies, and we’ve no plans to slow down any time soon.’

Do you have a story to share? We want to hear from you.

Get in touch: [email protected]