Home » Lifestyle » On a remote Australian island, a small patch of reef is as good as scientists have ever seen it

On a remote Australian island, a small patch of reef is as good as scientists have ever seen it

By Laura Chung and Brook Mitchell 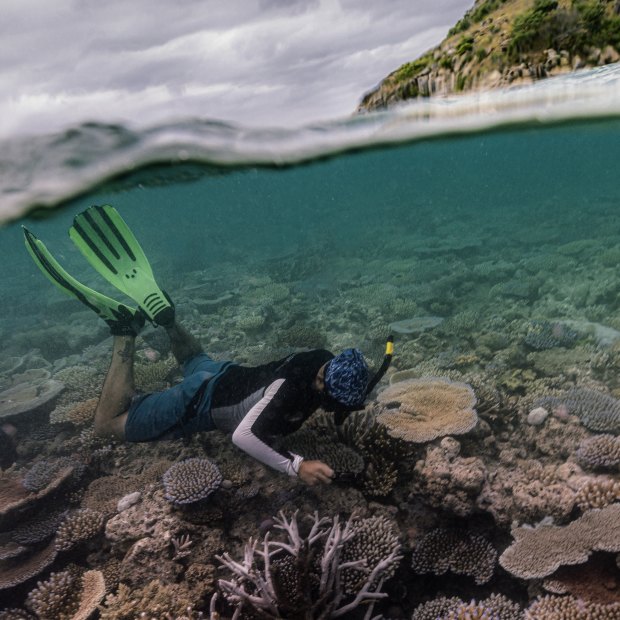 The winds howl almost constantly during the cooler months on Lizard Island, a remote island 270 kilometres north of Cairns. Reprieve can only be found underwater among the colourful fish that dart between the vibrant blue, orange, green and purple coral so quickly it’s impossible to keep up. The silence under the water might be why the marine biologists working on the island love to sink below it every chance they get. 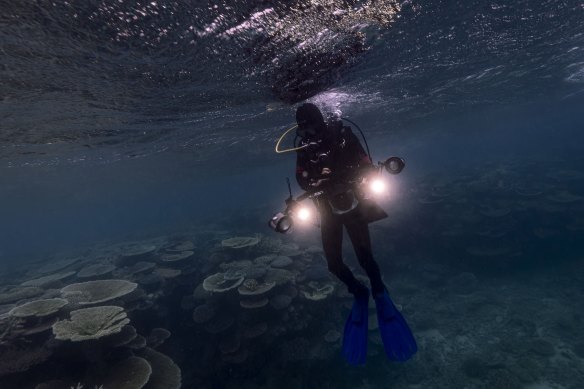 A diver works to map the Reef at North Point on Lizard Island. Credit:Brook Mitchell

For a generation the island’s research station has been central to scientific efforts to study the reef, and more recently the impacts of bleaching caused by climate change. The previous government controversially spent almost $450 million in a single tranche of funding to the Great Barrier Reef Foundation. As The Sydney Morning Herald and The Age visited in late winter, the impact of that investment was still being considered by scientists concerned with the reef, while pressure continues to mount on the new government to address a looming catastrophe.

Researchers working on the island say the reef is as good as they’ve ever seen it. While this small patch of the reef may be recovering, the outlook for the Great Barrier Reef, an intricate living mesh that runs for 2300 kilometres along the Queensland coast and stretches across 350,000 square kilometres, remains grim.

Back on land at the Australian Museum’s Lizard Island Research Station, the marine biologists study the samples they’ve collected. Joint directors Dr Anne Hoggett and husband Dr Lyle Vail say there’s no better job in the world. The pair have been managing the station for more than 30 years.

“There’s hardly such a thing as a typical day because they’re so variable,” Hoggett says. 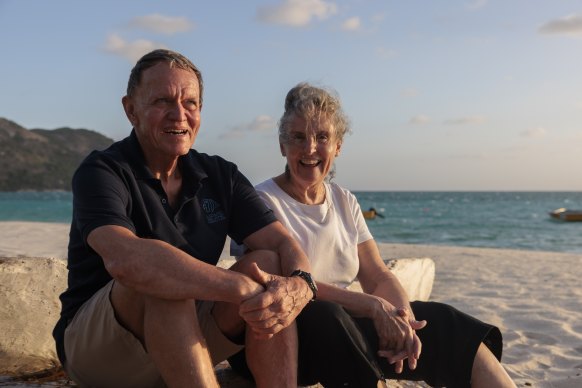 Over the years, the couple has noticed their environment changing: there are more invasive weed species on the island and the reef has been damaged by bleaching, cyclone and La Nina weather events. Hoggett and Vail are sceptical about the long-term survival of the reef. There is also a lot of hope in the dozens of marine biologists that cycle through their doors every year.

“People are now increasingly aware of climate change and aware that we need to change our attitudes and the way that we do business. And if we can do things quickly enough, we can save the [reef],” she said. “If we were to turn off all climate emissions, now, we’d still face rising temperatures for decades. We’ve got to get over this hump and do our very best to turn them off sooner rather than later. Those 2030 and 2050 goals are too far away. We need to be doing much more, much more quickly.”

There’s a friendly atmosphere as researchers mingle at the station, often alongside large taps that run salt water into the fish tanks. The marine biologists talk about their research projects and plan when they’re next hitting the ocean. One of the best places to sink below the surface is North Point – about a 20-minute boat ride from the centre in rough wave conditions – where PhD candidate Matt Nicholson and Durham University Assistant Professor Dr Will Feeney are filming fish behaviour. 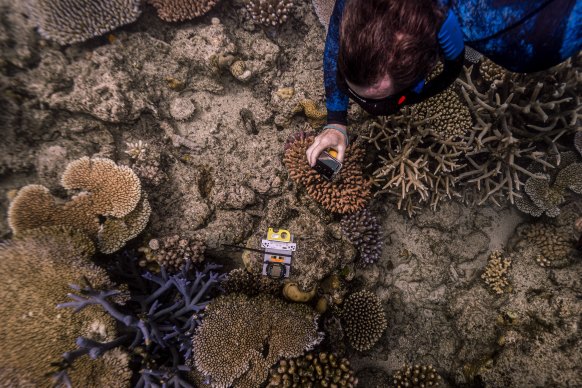 Dr Will Feeney carries out his research at North Point Reef off Lizard Island.Credit:Brook Mitchell

Between dives, the pair say the reef is as good as they have ever seen it. Five years ago, this area was severely impacted by mass coral bleaching and cyclone events. Now, it teems with wildlife: parrot fish with their distinct beak-like mouths nibble at bits of coral, schools of blue-green and yellow damsel fish dart around, while Feeney spots a group of six harlequin filefish fighting. They stand out among the other fish because of their aqua and orange spot colouring and long, snout-like faces. Not long ago, it would be rare for Feeney to have spotted any.

Another sign that the reef is recovering is the branching coral that appears every few metres or so. Its budding branches give scientists hope this patch of the reef is slowly recovering from the past six years which have been filled with four mass coral bleaching events since 2016 and tropical cyclones. The 2021 and 2022 summer was the first time the reef had bleached during a La Nina year. Bleaching is now happening so frequently that scientists say the billions of dollars spent on conservation measures have failed to halt the growing damage caused by climate change. 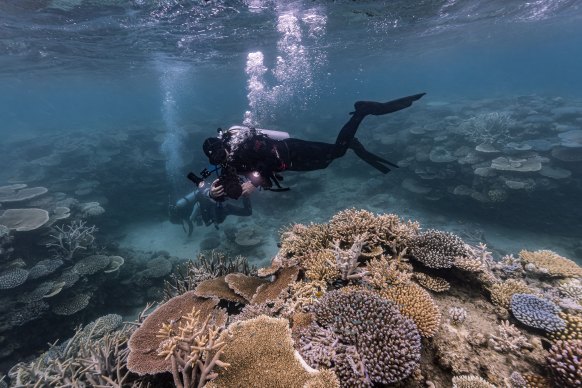 Divers work to map the Reef at North Point on Lizard Island. Thousands of photographs will be put together to form a 3D render of the area.Credit:Brook Mtichell

Bleaching is forecast to reduce global coral cover by 95 per cent under 2 degrees of warming, and 70 per cent under 1.5 degrees. If all countries deliver on their climate commitments, the world would still be on track for 2 degrees or more of warming. If the rest of the world followed Australia’s current commitments and policies, global warming would exceed 3 degrees, according to Climate Action Tracker.

The Australian Institute of Marine Science (AIMS) listed the outlook for the reef’s health as “very poor” in this year’s annual report, with the agency’s chief executive, Paul Hardisty, saying the increased frequency of mass coral bleaching events was “uncharted territory” for the reef following the fourth mass bleaching in seven years.

WWF Australia head of oceans Richard Leck said the recovery of the reef was patchy. In areas that had bounced back, including Lizard Island and the northern parts of the reef, recovery had predominately been of fast-growing coral which limits biodiversity. Some corals can take up to 100 years to grow and so as climate-induced events become more frequent, the diversity of the reef diminishes.

“It has been likened to what you get in some ecosystems after a bushfire has come through – recovery can be really swift, but it can also create a monoculture,” he says.

“This type of coral-dominated recovery is one that is highly susceptible to climate-induced threats like coral bleaching and storm damage from cyclones. It is susceptible to Crown of Thorn starfish too.

“But all climate science indicates that this is a scenario we cannot count on going in the future. It is inevitable that we will have more coral bleaching and more severe cyclones.”

However, he says the recovery in some parts of the reef should give people hope that the reef is resilient and that efforts to protect it are working. He adds that the government should also consider investing its next round of funding into limiting the environmental damage from pollution and sediment run-off from agriculture.

“We shouldn’t give up,” Leck says.

One of the most controversial initiatives to boost the restore the reef is a $443.3 million grant provided by the former Coalition government to the Great Barrier Reef Foundation in 2018. The Australian National Audit Office found in 2019 that the government ignored the foundation’s past fundraising performance when its grant was made, neglecting its capacity to scale-up the organisation and administer the massive cash injection. At the time, the government did not run a tender process or give other organisations, including its own marine science or reef agencies, opportunity to apply for the funding.

The funds were set to be delivered over six years, with investment in water quality improvement, crown-of-thorns starfish outbreak control, reef restoration and adaptation and Traditional Owner reef protection projects. 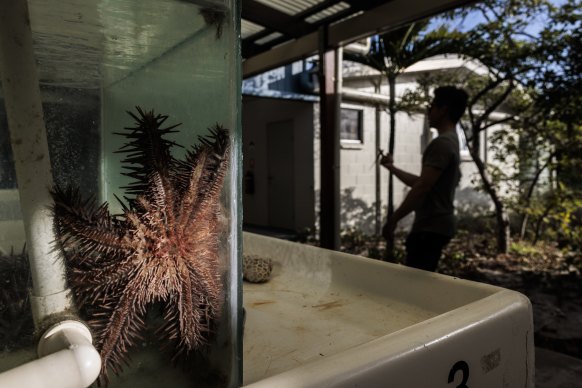 Crown-of-thorns starfish are kept in a tank for research by Sven Uthicke, research scientist with the Australian Institute of Marine Science.Credit:Brook Mitchell

Australia’s Auditor-General found in May the organisation had raised just $54 million – 99 per cent of which was for in-kind services, with just $684,000 in cash donations. As of September last year, the foundation had secured pledges valued up to $157 million – falling short of its initial $400 million target.

For its part, the foundation says that in the past four years it has committed the majority of funding to reef protection and restoration. It adds that it is on track to deliver against its objectives with more than 300 projects under way with 400 partners, including the Australian Institute of Marine Science, the Great Barrier Reef Marine Park Authority, James Cook University and the CSIRO.

Federal Environment Minister Tanya Plibersek says the GBRF received the entire $443.3 million grant in 2018. “There is only a small amount left – around $5 million – which will be disbursed back to projects that care for the reef,” she says.

She adds the reef is one of the most beautiful places on earth that must be protected for future generations. The federal government has committed to spending $1.2 billion on the reef by the end of the decade, targeting water quality and supporting indigenous reef protection.

For the marine biologists on Lizard Island, the future of the reef is vital to their work and ensuring the survival of the marine ecosystem. Fenney says while it is hopeful to see this patch of the reef looking healthy, more drastic climate action is needed to reverse the years of political inaction. Hoggett says the reef’s recovery around the island shows it is resilient, but it cannot keep bouncing back time and time again as the effects of climate change worsen.

But scientists are determined it’s not too late. Leck says greater action on climate change is needed, which includes a greater global ambition to reduce emissions, as well as improving targeted investment. Earlier this year, the federal government committed to reducing emissions by 43 per cent by 2030. Despite the mammoth challenges, Leck says the passion of people is promising.

That passion is evident in Lizard Island’s researchers. You can see it in Nicholson’s “shitty job” of trawling through dozens of samples of fish excrement looking for the indigestible heads of parasites. He hopes to understand what type of fish prefer to eat the parasites and whether there are any new species yet to be identified. 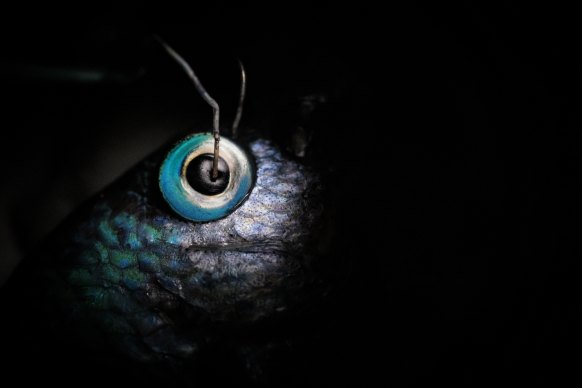 It’s also evident in PhD candidate Abigail Shaughnessy’s research as she shines different-coloured lights over fish eyes to understand how they process different colours, or in the work of AIMS research scientist Sven Uthicke who seeks to control future outbreaks of the coral-eating crown-of- thorns starfish. But most of all, the passion is evident sitting on a beach as the sun sets over the Queensland ocean, drinking beers and listening to the marine biologists talk about where they’ll go swimming tomorrow.

A guide to the environment, what’s happening to it, what’s being done about it and what it means for the future. Sign up to our fortnightly Environment newsletter here.

Most Viewed in Environment