On Her Majesty's Sandwich Service

On Her Majesty’s Sandwich Service: Bukingham Palace’s famous garden parties are cancelled this year, but you are cordially invited to have one in your OWN garden – with help from a top royal chef

Scones, sandwiches, sunshine and a chance to chat to her subjects, it’s no wonder the Queen loves hosting her annual summer garden parties.

The gatherings, at Buckingham Palace and the Palace of Holyroodhouse in Edinburgh, have been taking place for 160 years with the Royal Family throwing open their gates to the great and good of local communities, who feast on 20,000 sandwiches, 20,000 slices of cake and 27,000 cups of tea.

This year, sadly, all four garden parties have been cancelled. Palace sources say the Queen, who looks forward to the events more than any other royal occasion, was ‘deeply disappointed’ they couldn’t take place. 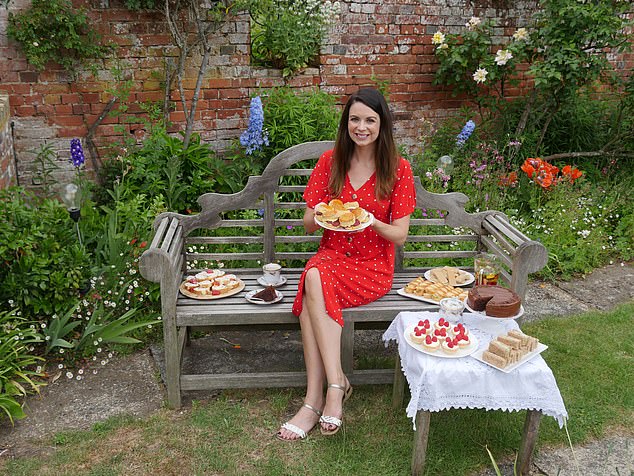 The 30,000 guests — whose gilt-edged invitations were sent out earlier this year — have been invited to attend next year’s parties instead.

But there’s no reason not to enjoy the lovely weather, with a royal tea party in your own garden.

There’s even help on hand from the Palace chefs, who have been sharing their recipes for tea-time classics on the Royal Family’s official Instagram account.

I called on royal chef Darren McGrady, who cooked for the Queen for 11 years, for his step-by-step guide to making an afternoon tea Her Majesty would love.

SCONES WITH JAM FIRST… THEN CREAM 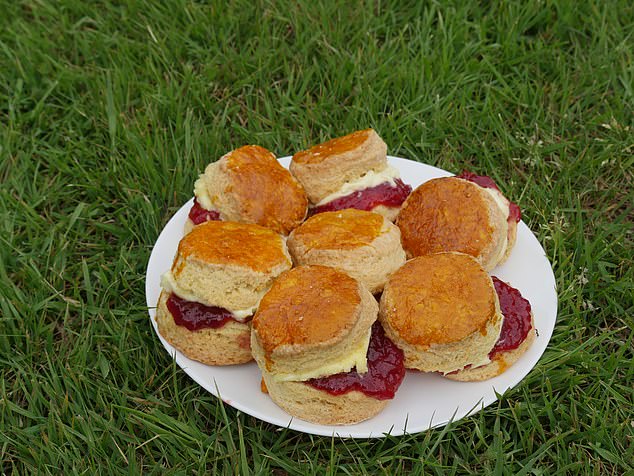 ‘These are the Queen’s favourite,’ says Darren. ‘She has them for tea every day, wherever she is in the world: plain one day; fruit scones the next’

‘These are the Queen’s favourite,’ says Darren. ‘She has them for tea every day, wherever she is in the world: plain one day; fruit scones the next.’

To make ten royal scones, mix 420g plain flour, 70g granulated sugar and 4 teaspoons of baking powder in a bowl, before adding 110g softened butter and rubbing it between your fingers until the mixture turns into fine breadcrumbs.

Next, make a well in the middle and add a beaten egg and 95ml milk. Use a metal spoon to bring the mixture together and then dig in your hands.

This stage is messy and I ended up with flour all over my party dress and clumps of dough wedged between my fingers. ‘It’s important you don’t knead it,’ Darren explains.

‘You want the scones light and fluffy. Once the dough has come together, turn it out on to a floury worktop and roll it to around 2.5cm thick.’

Cut circles using a 5cm cutter. Put them on a baking sheet a few centimetres apart, brush the tops with egg yolk and bake the scones for 15-20 minutes at 180c.

‘When they’re ready they’ll be golden brown on top, firm on the outside and gorgeously soft in the middle.’

Now for the controversial bit. Jam or cream first? ‘The Queen is always jam first, followed by a layer of delicious clotted cream,’ Darren says.

The Queen’s favourite jam is made from wild strawberries (fraises des bois), picked from the gardens at Balmoral Castle.

I’ve had to make do with a jar from my local supermarket, but I did manage to get my hands on some clotted cream — and the combination is truly mouth-watering. 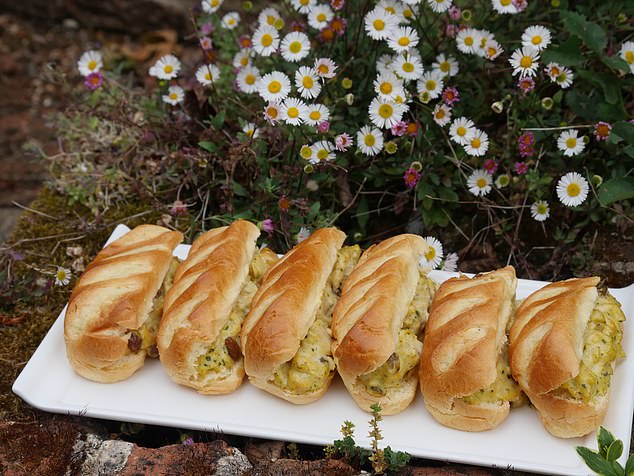 The key is to cut them to just the right size. ‘There’s a huge focus on everything being tiny — just one bite,’ explains Darren

Bridge rolls — small, soft, fingershaped rolls — were a favourite of the Queen Mother, and regularly make an appearance at garden parties, filled with coronation chicken, which has been on the menu since the Queen’s Coronation in 1953.

The key is to cut them to just the right size. ‘There’s a huge focus on everything being tiny — just one bite,’ explains Darren.

‘The Queen is very particular about this. She wants everyone to feel at ease — so, if you’ve just popped a sandwich in your mouth and turn around to find the Queen behind you, you don’t have to spend ages chomping away.’

His recipe, which makes six portions, requires 450g boneless, skinless chicken breasts — which are poached in a large pan with an onion, four sticks of celery, a bay leaf and 1.4 litres of cold water.

The next bit is easy: mix 230g mayonnaise, 125g yoghurt and 60g double cream together with a tablespoon of curry paste, a teaspoon of sugar, the juice of a lime and a handful each of diced red pepper, diced red onion, diced mango, diced pineapple and diced tinned apricot, before seasoning.

The curry paste makes the mixture bright yellow and it smells fragrant and spicy. I finish by cutting the chicken into bite-size pieces and stirring these into the mix.

I’ve bought brioche rolls, which were the closest I could find to bridge rolls, so I slice each in half and dollop a generous serving of coronation chicken inside.

I don’t bother making mine any smaller, I’m unlikely to be interrupted by anyone — let alone a royal — and they’re far too tasty to cut in two.

Darren — who worked at Buckingham Palace from 1982 to 1993 — remembers baking this shortbread for Lady Sarah Chatto, Princess Margaret’s daughter. Sieve 225g plain flour, 115g cornflour and 115g icing sugar into a bowl. Cut 225g unsalted butter into pieces and rub it into the dry mixture until it forms a ball. Then dust a rectangular mould with flour and press the ball of dough into it until it’s around a centimetre thick. Tip the shortbread out on to a tray lined with baking paper, prick it all over with a fork and bake at 180c for 20 minutes. Next cut the shortbread into fingers, only going a third of the way. It’s important to do this while it’s hot, as it means it will snap apart easily when it cools. Finish with a dusting of granulated sugar. 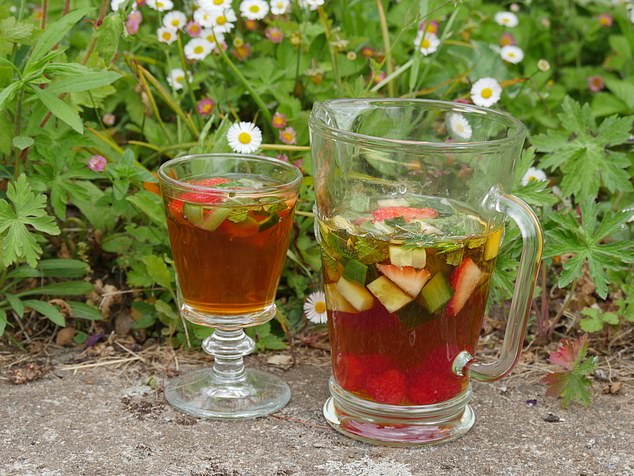 ‘[Drinking] in the royal tent, it’s just not the done thing — you don’t want people getting tipsy at the Palace,’ says Darren.

No garden party would be complete without a glass of Pimm’s — but royal gatherings are, officially, dry affairs.

‘Even in the royal tent, it’s just not the done thing — you don’t want people getting tipsy at the Palace,’ says Darren.

Instead, during the day, guests are offered tea (usually Twinings Earl Grey) or iced coffee, made with coffee which is supplied by London-based merchant H.R. Higgins. But at 6pm, when the party’s over and the guests have gone home, Her Majesty can be found sipping on something a little stronger.

If it’s not her trademark gin and Dubonnet, it’s almost invariably a glass of Pimm’s and lemonade — made to a special royal recipe.

Darren explains: ‘She likes the gin-based Pimm’s No. 1, with lemonade; but the interesting bit is the garnish, which makes it more like a fruit cocktail than a drink. ‘It’s made with oranges, lemons, cucumber, mint, strawberries, cherries and borage [an edible garden plant].’

I dutifully put every fruit I can find in the fridge into my jug of Pimm’s — and even forage in the garden for some borage, which gives it a fresh, and rather herby aftertaste. 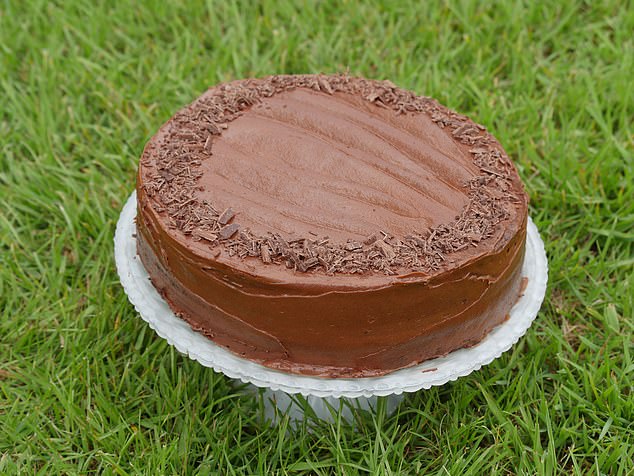 Although chocolate doesn’t always make an appearance at garden parties — ‘it’s normally warm, so you risk it melting and going on the ladies’ dresses’

The Queen is a ‘chocoholic’, says Darren, and both her go-to cakes — a no-bake chocolate biscuit cake made with Rich Tea biscuits, and a sponge recipe dating back to 1899 which she has on her birthday — are flavoured with chocolate.

Although chocolate doesn’t always make an appearance at garden parties — ‘it’s normally warm, so you risk it melting and going on the ladies’ dresses’ — there are always large cakes on the tables in the tea tent, so guests can cut a slice of whichever they prefer.

This chocolate sponge recipe is Her Majesty’s favourite. I start by whisking two whole eggs and six yolks together with 115g granulated sugar, and placing the bowl over a pan of hot water so it heats up.

I whisk until it doubles in volume before adding 55g melted butter, and 55g plain flour and 30g cocoa powder, sieved together.

While the cake cooks, I make the topping and filling, by melting 570ml double cream with 450g dark chocolate.

Once this, and the cake, have cooled, I slice the sponge horizontally into three and spread it in between each layer, before topping with yet more chocolatey icing and chocolate curls.

It’s decadent and requires an extremely sweet tooth — something, it seems, Her Majesty and I have in common.

An afternoon tea classic, cucumber sandwiches sound simple — but, made according to the royal recipe, they’re the fiddliest dish on the menu.

First, the bread. It must be brown (white is used for egg salad, ham and mustard or beef and horseradish), cut wafer-thin, crusts off and lightly buttered.

Next, the cucumber, which is cut with a vegetable peeler, rather than a knife, to give perfectly thin, evenly sliced, pieces.

Darren explains: ‘Start by peeling the whole cucumber. Keep going with the peeler, slicing the flesh in long, thin strips, until you get to the seeds. Turn it over and peel it again from the other side. Then, lay the strips over the buttered bread and cut them to size.’

The sandwiches are finished with a sprinkle of black pepper — never salt, as it pulls the moisture out and makes the cucumber chewy. They’re then sliced into thin, dainty fingers.

They are utterly delicious — crisp and fresh, and a lovely contrast to all the sweet dishes. They aren’t the Queen’s favourite sandwiches, however.

These are a Palace creation called ‘jam pennies’, made from white bread, butter and jam, and cut into circles the size of old English pennies.

‘They’re what the Queen and Princess Margaret used to have in the nursery,’ Darren explains.

‘When she’s on her own for tea, she likes a small plate of them.

‘But they’re not for garden parties — people expect a bit more than a jam sandwich.’ 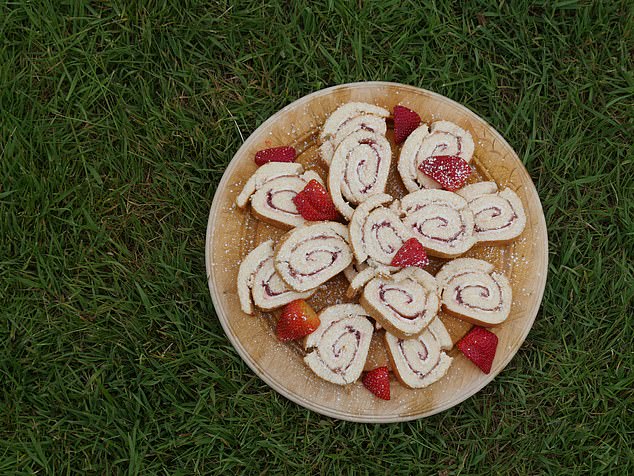 The mixture is meant to be light, fluffy and full of air, so it’s important not to over-beat

This teatime treat is notoriously difficult to make, but a must for a royal spread.

The mixture is meant to be light, fluffy and full of air, so it’s important not to over-beat. I pour it into a greased, lined Swiss roll tin and bake the sponge at 180c for 10-15 minutes. It’s ready once it springs back.

Once cooled, I spread it with a thick layer of strawberry jam (leftover from my scones) and 570ml thick cream, which I’ve whipped to soft peaks.

Even Mary Berry struggles with the next bit but, going ever-so-slowly, I manage to roll the sponge up into a tight spiral, with only a few cracks, and a liberal dusting of icing sugar saves the day once again.

I sprinkle on some strawberries, slice it into wedges and it’s ready to serve. 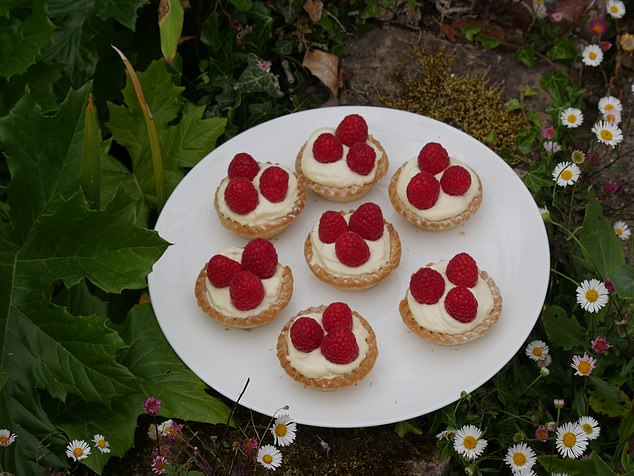 These tartlets are a garden party staple. They’re also easy to cheat, as you can buy the pastry cases ready-made from the supermarket

The Queen loved these little tarts as a child, and they were often made when she and Princess Margaret had been raspberry-picking at Balmoral.

Today, they’re a garden party staple. They’re also easy to cheat, as you can buy the pastry cases ready-made from the supermarket.

The tart cases are then filled with pastry cream, made by mixing 115g sugar, 35g flour, a teaspoon of vanilla extract, a pinch of salt and four egg yolks together in a bowl, then adding 375ml warm whole milk and whisking it over a bowl of boiling water until it reaches the consistency of thick custard.

If this sounds like too much hassle, you can also use whipped cream, flavoured with vanilla extract.

The final touch is to top each tart with upturned raspberries — and, Darren’s secret tip, ‘brush the berries with melted jam to give a lovely shine’.