It’s getting to the business end of the University Challenge deal and the weekly contests are getting ever more tense, as the latest match – between St John’s Cambridge and Balliol Oxford – proved.

Dubbed ‘the boat race battle’ on social media, the Monday night contest between two of the UK’s top universities left viewers on the edge of their seats during an encounter that saw the two brainbox teams neck-and-neck throughout. 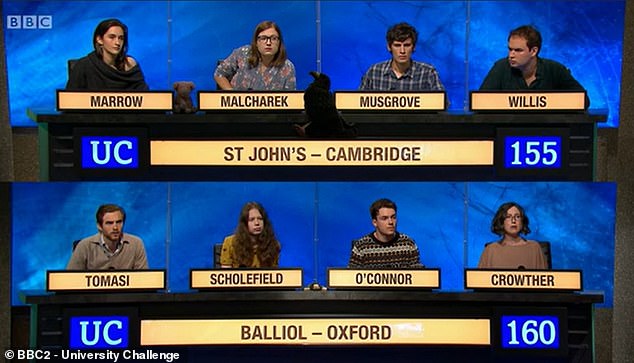 Boat race battle: The 21st episode of the current series of the BBC2 quiz saw St John’s Cambridge take on Balliol Oxford in a closely-fought contest that left viewers at home enthralled

In the end, however, it was a knowledge of birds that propelled Oxford Balliol to grasp victory, pulling away in the final minutes of the programme to win 200 to 155 after a bonus round on ornithology.

Paxman asked Balliol: ‘Which flightless bird is the second largest living bird after the ostrich?’

The answer, emu, saw the Oxford team stretch ahead, and they didn’t look back, with Cambridge failing to score another point.

Paxman, still sporting bouyant lockdown hair as the episode was filmed during the first lockdown, told Oxford ‘you just got in under the wire there’ as they fired off a series of correct answers to swell their score. 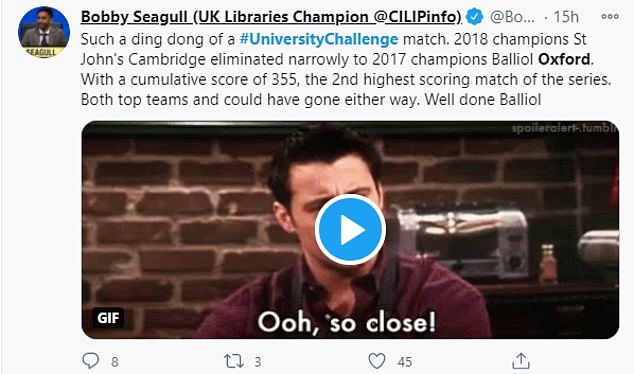 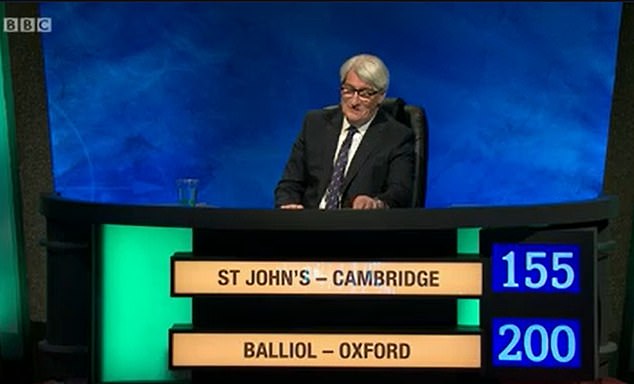 Final score: Balliol made it through to the quarter-finals of the show, thanks to a flourish in the dying minutes of the show (Pictured: host Jeremy Paxman)

At home, viewers took to Twitter to say they’d enjoyed the battle: @Gasdoc2857 wrote: ‘Oxford vs Cambridge. It’s like the #boatrace all over again.’

@LauraSlattery said the tense match had been hard to watch: ‘The problem I have watching #UniversityChallenge is I can’t bear the embarrassment of the one-sided contests, but I also get tense when the scores are close. This programme is just too harrowing.’

@chrono88 penned: ‘God this was close. Both teams did very well. I wish they could both win.’