“I never in my life would have thought I would have a cooking show,” said Paris Hilton on the eve of her Netflix show’s premiere — “Cooking With Paris” — out today.

“It’s just so random, but it actually works out perfectly, especially moving into this next phase in my life and growing up and getting married and becoming a mom one day,” she continued.

As the world is well aware, given the headlines, Hilton has been busy planning her wedding with fiancé Carter Milliken Reum. She’s expected to share a behind-the-scenes look in her upcoming Peacock reality show, “Paris in Love,” as part of her new production company Slivington Manor Entertainment in a deal with Warner Bros. (with two other projects in the works). She’s also continuing to hit the stage as a top paid DJ, recently performing in Miami and Las Vegas — though slowing that down these days.

“I’ve been saying ‘no’ to a lot of things, because I just feel that, unless it’s something that’s very special or something that I feel that I would want to do, I really just am focusing so much on my business,” she said. “I’m busier than ever.”

She’s cohosting her podcast “This Is Paris” at her in-house studio with Hunter March; launching her own podcasting company — with three shows in the works; getting ready to introduce a new beauty brand, and unveiling her 29th fragrance. All that, plus she’s investing in tech projects, she said, as well as recording her second album and writing her third book.

“I might need some clones to help me do all this,” she joked.

Things were more quiet in 2020, while home due to the pandemic. But Hilton, a self-described workaholic, never stops — as witnessed in her moving YouTube documentary, also titled “This Is Paris,” where she opens up about childhood trauma. It was also on YouTube that viewers got to see another side of Hilton — in the kitchen. The last time she was filmed with a spatula in hand was on “The Simple Life,” Fox’s show costarring Nicole Richie. Now, nearly two decades later, Hilton was home in Los Angeles, cooking her go-to lasagna recipe for her followers.

“It used to just be normal lasagna, which was my grandmother’s recipe, and we were very close,” Hilton explained. “So, I learned it from her and also my mom would cook it all the time. It was just a family recipe that I Paris-ized and made sliving.”

As in, she made it her own. Sliving is her favorite new mantra, a blend of slaying and living — living your best life. She says it frequently in the quirky and entertaining video, which she uploaded in January of last year. It has more than 5 million views to date.

“It blew up and went viral,” Hilton went on. “And then, all of a sudden, I had all these people reaching out to me to do an actual cooking show. And when I got the offer from Netflix, I was, like, I’m obsessed with Netflix. I was, like, this is the perfect home for this type of show.”

Working with her stylist of nearly 10 years, Sammy K., the Netflix show was a creative outlet, where the two got to play dress up while matching the outfits with the theme of each episode, along with the set design and dish of the day. It’s all-around fashion eye candy, with Hilton often seen in ’50s housewives meets glam girl looks.

“It’s seeing her in these iconic luxury brands, like the fantasy that people have of Paris, contrasting that with these very basic environments and everyday relatable atmospheres,” Sammy said.

In one scene, she wears a hot pink Christian Cowan-designed, ’80s-influenced Barbie prom dress with a train, while shopping for ingredients at Gelson’s Markets. 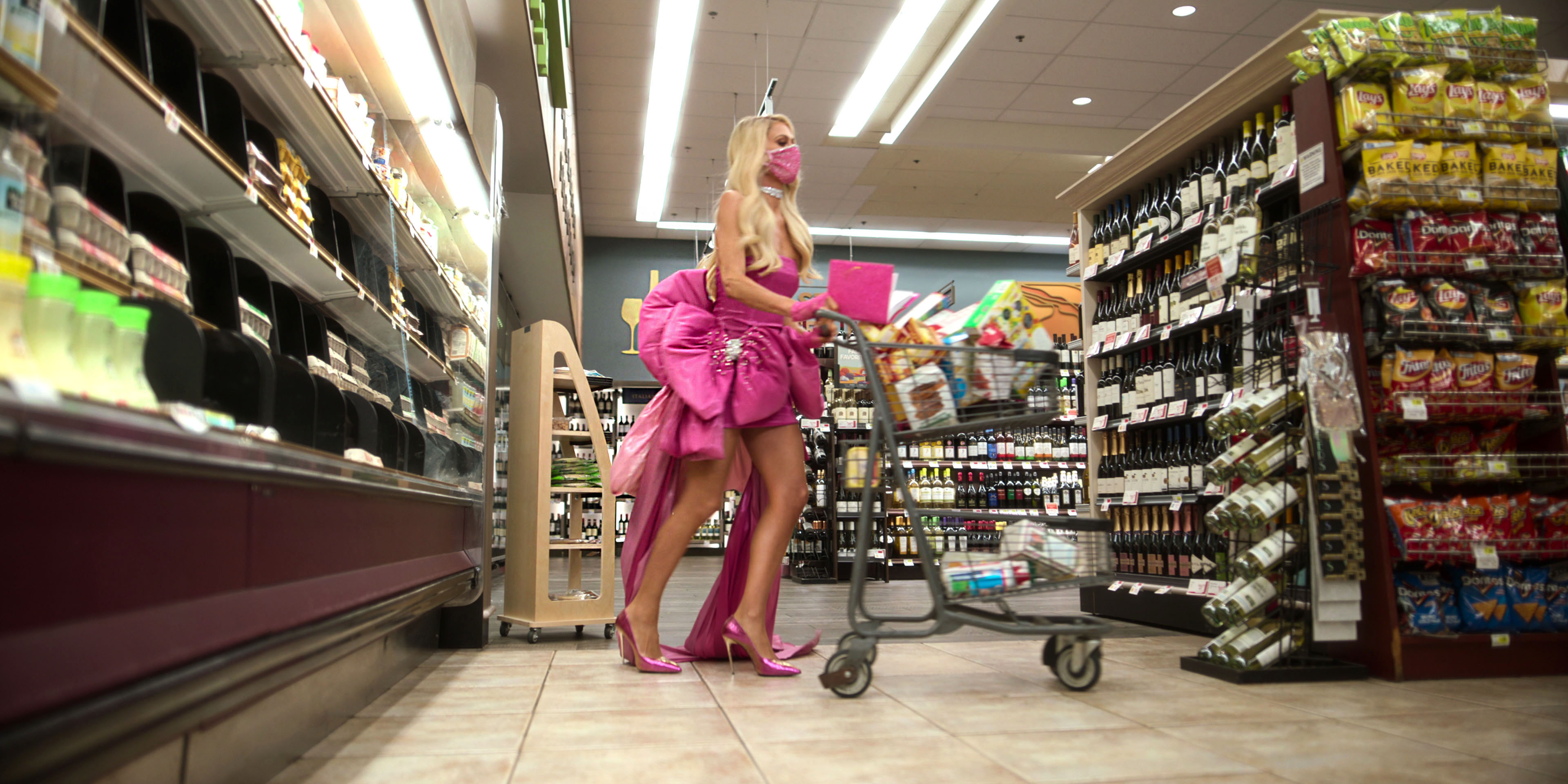 Hilton at Gelson’s Market in Christian Cowan for the first episode of the show, featuring Kim Kardashian West as her guest. Kit Karzen/Netflix

“We loved it instantly, but we were, like, ‘Is this too much for the supermarket?’” Sammy said. “‘Are people going to think that it’s just way over the top and not going to get it and take away from the show?’ But then, the more we thought about it and building up to the day of the shoot — that morning we just kind of pulled the trigger and said, ‘Let’s go for it.’”

That day set the tone for the rest of the shoot and direction of the show, he added. “Everything fell into place from that point on.”

“The theme was diamonds and pearls,” Sammy said. “It was her luxury, steakhouse night with caviar….With that episode, I remember they were going to do a lot of black velvet, with a lot of, like, crystals and pearls [on set]. Balmain had this velvet dress with a beaded pearl, high-neck collar, with necklaces built into the dress, and it was perfect for her. We put matching black velvet opera-length gloves, found a little, cute tiara for her. It’s new age Paris meets ‘Breakfast at Tiffany’s,’ with a modern dress and a modern designer.”

“It’s by far the most fashionable cooking show to ever exist,” proclaimed Hilton.

“It was fun putting together each look perfectly to go with whatever theme was happening, with what we were cooking or which one of my friends was coming over,” she continued. Guests include Kim Kardashian West and Demi Lovato. “Or how the dining room was going to be decorated. And even decorating my kitchen. It was just so much fun just to really play into that and play into the character that I like to play when I’m doing this type of show.”

That’s right, it’s a character — and some would argue a grown-up version of Hilton in “The Simple Life.” (“I knew exactly what I was doing,” she has said of the experience on the Fox show, where she famously asked, “What is Walmart? Like, they sell wall stuff?”)

“I think, from just being in this industry for so long, and what I created in the beginning, I just feel that when I’m doing comedy, and it’s a show like this, which is very playful and showing my fun and childlike side, I kind of play into that character,” she said when asked why she puts on characters. “And that’s where I feel comfortable, because it’s just a lot of fun. And I’m still myself but just more of my playful self. And then, there’s times where I’m serious, but it just depends on what’s happening. With the show, I just felt, like, everybody’s been locked in their houses for so long. And I think it’s important for people to be able to laugh and smile and be entertained and watch something that could really just brighten their mood.”

Reviews for the show have been mixed, with some critiquing the naïve, sometimes ditzy, persona she puts forward. But the reality is, Hilton has always been in on the joke. And this is no different.