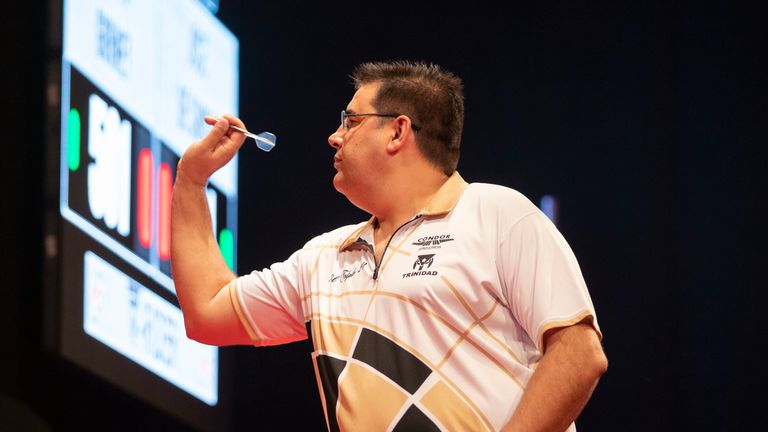 Jose de Sousa doesn’t have a favourite double, which is perhaps fitting for a player who relies on instinct, appetite and affection for darts that has powered him over the last 18 months.

“All the doubles are important,” he tells Sky Sports with a smile while showing us his darts from home set-up – Zoom can do wonders for a virtual interview.

“I don’t think about averages, they help to win but I only think about what I have to do. A friend of mine said, the triples are to run away and the doubles are to win the money.”

It’s a simple approach to a simple sport and such is De Sousa’s scoring power the average is usually pretty good too. That approach almost makes for some remarkable finishing attempts, and scoring.

Needing 120 against Michael van Gerwen at the Gibraltar Darts Trophy, he took aim at three double tops. Having missed the first he promptly went on to hit two treble 20s and bust his score.

There is more to De Sousa than maverick scoring and an unorthodox approach to doubling – although they have helped make the Portuguese, who resides in Madrid with his Spanish wife, something of a social media sensation with his approach to the finishing stages of a leg.

Ahead of his return to action in Monday’s PDC Home Tour Play-Offs, and less than a year on from turning professional, De Sousa spoke candidly on how darts has become his life.

“Five or six years ago I didn’t have a job, and was just working for six months with my boss, making kitchens.

“I went to Q-School, I won my card and made the circuit. At first things weren’t going too well but then my sponsors made new barrels, new flights and I started to get stronger and stronger.

“I am very happy now, everything is going very well. I can’t wait for this situation to be over to be playing in competitions again.”

Darts is a sport synonymous with late bloomers, although when they come from the Iberian peninsula it serves only to underline the sport’s increasingly global appeal.

Portugal and Spain are not darting hotbeds, so where did it all begin? Unsurprisingly it’s the soft-tip version of the game which also provides an explanation for those quirky finishes.

Jose de Sousa shows us how it's done… pic.twitter.com/TYspEEFRND

“I played soft tip for about 26 years, but steel tip darts for just two or three years,” says De Sousa.

“Now I just practice steel-tip and I am practicing six hours a day because it is now my job and I am taking it very seriously.

“There is a very big difference between them. In soft tip when I throw the darts, it went where I wanted it to go, in steel darts it is different and needs more hard work.”

Of those 26 years, only two have involved playing regular steel tip darts. His soft-tip success was remarkable. The rough estimate is from 60 finals reached, 54 titles were won and, on the rare occasion back then that he did throw steel darts, resulted in a couple of appearances at the World Championships as a regional qualifier.

In January 2019, the Portuguese thrower known as ‘The Special One’ headed to Germany for European Q-School and the chance to win his two-year playing rights. 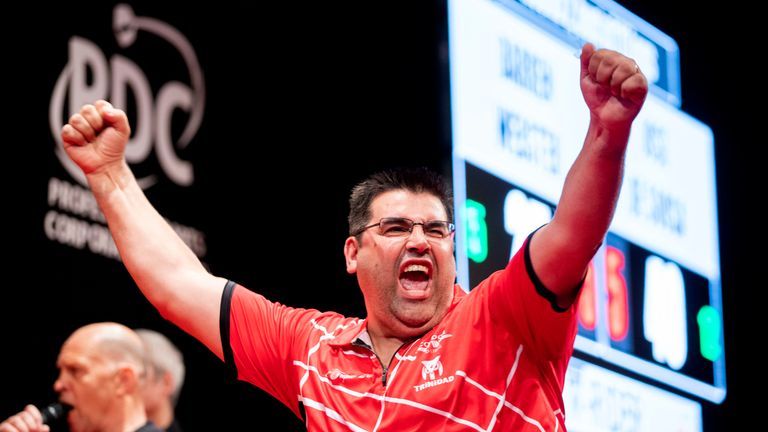 It wasn’t his first attempt at Q-School, that came in 2017 when his cumulative effort across the four days was not enough, but two years later he was back and this time his consistency paid off.

Over four days in Germany, he reached one quarter-final and along with three runs to the last 32, it was enough to finish sixth on the European Qualifying Order of Merit and secure his card.

Those first six months last year were tough, not earning enough via darts and not working as he tried to make the sport his living. It’s stood him in good stead for the current hiatus in the sport.

The 46-year-old had been working as a kitchen fitter, something that has come in handy when erected a darts from home set-up that includes a very fetching cabinet for the board that he created himself. 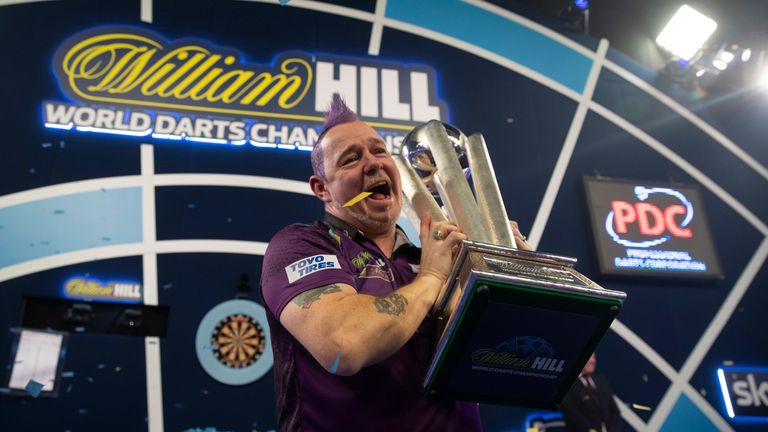 “I love Peter Wright and Gary Anderson – they are gentlemen.

I have a great relationship with Peter, he always speaks very well with me, I have beaten him twice and he had nothing but nice words and respect for me.”

He wasn’t the first nor will be the last to struggle with the difficult but understandable battle of working life and trying to make it as a professional.

“In January Jose rang and told me I am quitting my job to go full-time. My boss is building somewhere where I can practice and that’s what I am going to do,” De Sousa’s darts manager Mac Elkin tells us.

It’s gone better than he has imagined and despite still being a relative novice on the Tour he has earned £68,750 in prize money and won two ranking titles since gaining his Tour Card in January last year.

Despite the early struggles there were signs. A run to the last 16 in his third Pro Tour event and a first match win at a premier ranking tournament came before March.

Having reached the quarter-finals with a win over Daryl Gurney he was pipped in a last-leg decider by Chris Dobey but the time had come for a decision and that call to his manager.

With kitchen-fitting to one side, sponsorship deals signed and six hours’ practice a day, the effect was almost instantaneous. By the end of June he had reached his first Pro Tour final, beaten by James Wade having beaten Nathan Aspinall on his run to his second biggest pay-day as a player.

Jose De Sousa is absolutely flying in his front room. He beats Brown 5-0 to make it back-to-back whitewash victories!#UnibetHomeTour pic.twitter.com/1ocgLFoYOF

Five events later he was a champion, becoming the first Portuguese player to win a PDC title, and he did it the hard way. A 7-3 win over Peter Wright in the semi-final was followed by an 8-1 demolition of Gerwyn Price in the final to claim the £10,000 winner’s prize.

Another title followed a month later as his run of form earned him a spot at the Players Championship finals and the World Championship – the latter as a result of his performances as a professional rather than a regional qualifier.

He produced arguably the most impressive performance of the first phase of the Home Tour and on Monday he faces Nathan Aspinall, Jesus Noguera and Jamie Hughes for a spot in the second semi-final group.

“I have watched almost all the games, it’s good fun because at least it is some way for us to play against each other,” he says.

“It’s not easy, but it’s the same for everyone – playing in your house you are the favourite, like a football team playing at home.

“I think I have shown that I have a game like the top players and I hope I can continue to do it. I have played against Jamie and Nathan but it is not always the same and Nathan is the favourite – but if I play like the first stage I think I have a chance.” 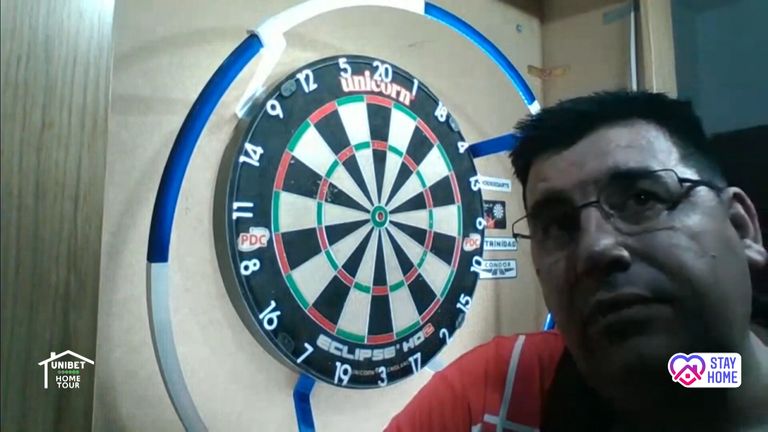 There have been no official tournaments, bar the PDC Home Tour, since mid-March and for those players further down the rankings the Pro and European Tours offer ranking points and prize money to make the big TV tournaments.

“I think when I play on the bigger stage I need to relax a little bit more, maybe when I can do that I will become a dangerous player,” says De Sousa.

“I haven’t received anything since March, just the appearances for the Home Tour, I am living on the money that I have won in the past, so I hope that it is over soon.”

De Sousa has yet to really make his mark in those. A win over James Richardson at the Players Championship finals last November and Brian Raban in the 2019 UK Open both came on the secondary stages in Minehead, while his three Alexandra Palace appearances are yet to yield a victory.

“There are many big tournaments to play in and to win, like the World Matchplay, Grand Prix and UK Open. Right now I am inside to qualify for them and I hope that we can.

“I want to play for Portugal in the World Cup, we are working for that. I’ve played for Spain but Portugal is my nation.”

Now ranked 59th in the world, the ambition for De Sousa is that of many other players and given his remarkable climb and dedication the sky may well be the limit.