A large party at a mansion in Southern California turned deadly Monday night after shots were fired. Two people were seriously wounded and one was killed in the incident, according to the Los Angeles Fire Department.

About 20 gunshots could be heard in a video posted by one partygoer on Instagram. In the video, there appear to be two rounds of gunfire, followed by chaos as people tried to run to safety. News cameras also captured a skirmish outside the home following the gunfire.

Head of security for the party, Kennie D. Leggett, told CBS LA it was being thrown to celebrate a football player who was recently drafted to an NFL team. Leggett did not name the player, or which team he was drafted to.

Police responded to the scene of the party before the shooting due to numerous complaints from neighbors worried about the size of the crowd. 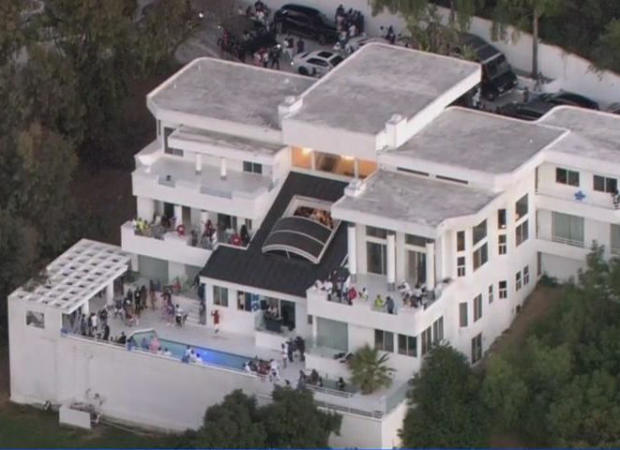 Packed buses were seen dropping dozens of people off at the home, and few wore face coverings, CBS LA reports. Police said they found about 200 people at the party when they first arrived around 6:30 p.m.

Large gatherings are currently prohibited in Los Angeles County due to the coronavirus pandemic. California became the first U.S. state to hit half a million coronavirus cases on August 1. According to data from Johns Hopkins University, 520,857 people in the state have tested positive for the virus, and more than 9,500 have died, as of Tuesday.

Police told CBS LA that they were unable to break up the party without a warrant.

“This, COVID I mean, is just pushing us out everywhere, and we have nothing,” Leggett told CBS LA. “So the only thing we do have is Airbnbs to rent, swimming pools for our kids, to do big things and things of that nature.”

After about 700 people attended an Airbnb party in New Jersey, the company announced last week that it would be shutting down properties that ignore social distancing guidelines — and company policy — to host parties. The home rental company first banned large parties in December.

“We ban party houses and will not tolerate irresponsible behavior on our platform,” Airbnb executive Chris Lehane said in a statement. “We know that there is still more work to be done, we ask that neighbors contact us as soon as possible through our Neighborhood Support Hotline, to directly communicate any concerns, which will help us continue to effectively enforce our party house ban.”

The company that manages the short-term rental in Los Angeles told CBS LA on Monday it was the first it had heard of the party. The  renters have now been asked to vacate the home, as they were in serious violation of the rental agreement.