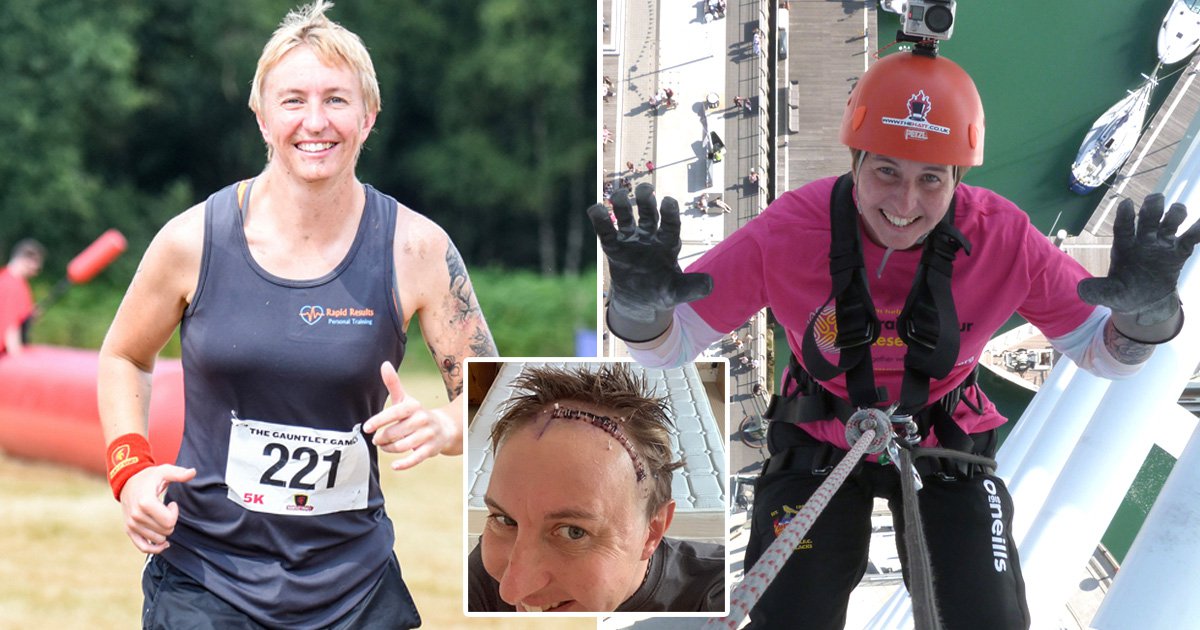 A personal trainer who mistook her tickly cough for Covid-19 only to be told she had eight malignant tumours is planning to spend the rest of her life fundraising for research so that others can get better prognoses.

Jenny Weller, 36, has never drunk alcohol or smoked, but a mutation in the DNA of her lung cells led to a diagnosis of ALK-positive lung cancer in September 2020, and she was told in February she had roughly 18 months left to live.

Jenny, who lives with her husband Steve, 61, said: ‘This isn’t something we thought we’d ever have to deal with.

‘Nobody ever wants to hear that they haven’t got forever left to live. But, at the same time, I’m happy with my lot. I’ve achieved a lot of the things I wanted to do.

‘I’m trying not to focus on what I’m leaving behind, but rather on doing what I can while I’m still here.’

Now, Jenny wants to use her athletic skills to fundraise for essential cancer research, having already abseiled down Portsmouth’s Spinnaker Tower in September.

What is ALK-positive lung cancer?

ALK stands for anaplastic lymphoma kinase. It occurs most frequently in lung cancer.

In simple terms, it’s caused by two genes fusing, copying themselves too often and creating cancerous cells which can spread throughout the body.

The AKLpositive.org website says you should see your doctor immediately if you have any of the following symptoms:

Before her diagnosis, Jenny first thought the cough she had was due to a cold, then, as the pandemic ramped up, she put it down to Covid.

She said: ‘The nature of personal training is that we take people outside in the cold and the wet a lot.

‘It wasn’t unusual to have a cold or cough at that time of year. It’s just that this one didn’t go away.’

As the weeks went by, Jenny carried on managing her personal training business, Rapid Results PT, in North Chailey, East Sussex, alongside her busy life, only noticing the cough if she had exerted herself.

‘It was just really dry irritating’, she remembered. ‘If I was playing a sport I would cough, or when I was lying down trying to go to sleep, I’d cough a lot – but other than that it didn’t really affect me at all for a good few months.’

She added: ‘I just put the fact that I wasn’t recovering down to either having had Covid, as no one had really been tested at the start, or that I was not sleeping enough – because of the stress of closing the gym and transitioning to working online.

‘No one was really going to the doctor with just a cough at that point.’

But as lockdown began to lift and Jenny was able to work outside with clients once more, her symptoms worsened.

She developed a powerful headache and would occasionally be sick when she changed position or stood up abruptly.

After a lump then appeared on her neck, Jenny realised she needed to see her doctor.

She said: ‘I had a nasty, thumping horrible headache, and I was losing weight because I couldn’t keep my meals down properly.

‘Once the lump came up on my neck, I called my GP for a telephone appointment, then he asked me in for an examination.

‘It was at that point that he said, “I don’t want to worry you, but I think this is probably something serious”.’

The doctor referred Jenny to an ear, nose and throat consultant – however as she waited for her appointment, her condition worsened.

Jenny said: ‘It was the Bank Holiday Monday at the end of August 2020, I’d just taken the dog for a walk and I felt absolutely exhausted and crashed out on the sofa.

‘I tried to go upstairs to go to the bathroom, but I passed out, fell downstairs and collapsed at the bottom.

‘I’m not really sure how long I was there.

‘I then tried to go and be sick in the kitchen, but I collapsed again.

‘Next thing I remember, Steve came home and found me on the floor in the kitchen having had a seizure, so we called 111.’

At first Jenny was taken to the Princess Royal Hospital in Haywards Heath, then transferred that evening to the Royal Sussex County Hospital in Brighton for scans.

Five days later, following various scans and a biopsy, Jenny was told the devastating news that not only did she have a 35mm cancerous tumour in her lung, but it had spread, forming five additional tumours in her brain – one of which was the size of a golf ball.

She also had another another tumour in her lymph nodes and one in her pelvis.

Jenny had to have surgery to remove the golf-ball sized tumour in her brain and once her headaches disappeared, she admitted it left her feeling optimistic.

‘I had put up with some pretty invasive surgery and radiotherapy treatment and in February I asked the doctor, “When am I going to get my life back? When can I get back to work? When can I drive?”,’ she said.

However, Jenny received a huge blow when the doctor told her she needed to prepare heself for the fact that she may not ever return to her old fitness levels and lifestyle.

‘Then the doctor said: “Well, you do have terminal cancer.”

‘That was the first time the word “terminal” had been used. I thought I had five or six years to live, but then she said the expectancy was one to two years, and I was already six months in.’

From then on, Jenny decided to reframe her priorities – rather than striving for normality, she wanted to focus on raising awareness of her kind of lung cancer and fundraising for the charities Brain Tumour Research and ALK-Positive UK.

She began with ‘Wear a Hat Day,’ which featured a Facebook video of her in a woolly hat, asking people to give money to Brain Tumour Research, and raised close to £1,000.

Jenny and her loved ones then created the hashtag #wellerfest and launched a series of sporting fundraising events to help raise money, with Jenny hoping to raise £30,000 before she dies.

One upcoming #wellerfest event will be taking place on November 28, in the form of a wild swim on East Sussex’s Hove seafront. Then, in spring 2022, there will be a sponsored cycle from John O’Groats to Land’s End and a mountain climb and zipwire ride in Snowdonia.

Jenny believes that more awareness of her condition could have helped her realise something was amiss sooner.

She said: ‘Just having a cough, lung cancer didn’t even cross my mind.

‘I think, because of the age gap between me and my husband, there was a natural expectation that we’d get to a point where I would be more likely to be looking after him, that I would be the one left behind.

‘Obviously, now that’s unlikely to be the case.

‘But I’m not focusing on what I’ll leave behind, but rather on doing what I can while I’m still here.’