Phyllis George, the former Miss America who became a female sportscasting pioneer on CBS’s “The NFL Today” and served as the first lady of Kentucky, has died. She was 70.

A family spokeswoman said George died Thursday at a Lexington, Kentucky, hospital after a long fight with a blood disorder.

“For many, Mom was known by her incredible accomplishments as the pioneering female sportscaster, 50th Miss America and first lady. But this was all before we were born and never how we viewed Mom. To us, she was the most incredible mother we could ever ask for, and it is all of the defining qualities the public never saw, especially against the winds of adversity, that symbolize how extraordinary she is more than anything else. The beauty so many recognized on the outside was a mere fraction of her internal beauty, only to be outdone by an unwavering spirit that allowed her to persevere against all the odds.”

Miss America in 1971, George joined Brent Musburger and Irv Cross in 1975 on “The NFL Today.” Jimmy “The Greek” Snyder later was added to the cast.

“Phyllis George was special. Her smile lit up millions of homes for the NFL Today,” Musburger tweeted. “Phyllis didn’t receive nearly enough credit for opening the sports broadcasting door for the dozens of talented women who took her lead and soared.”

George spent three seasons on the live pregame show, returned in 1980 and left in 1983, winning plaudits for her warmth of her interviews with star athletes. She also covered horse racing, hosted the entertainment show “People” and co-anchored the “CBS Morning News.”

George was briefly married to Hollywood producer Robert Evans in the mid-1970s and to John Y. Brown Jr. from 1979-98. Brown owned Kentucky Fried Chicken and the NBA’s Boston Celtics and served as the governor of Kentucky.

“Phyllis was a great asset to Kentucky,” Brown told the Louisville Courier-Journal. “We had a great partnership. I think we enjoyed every single day.”

From Denton, Texas, George attended the University of North Texas for three years, then went to Texas Christian University after earning a scholarship as Miss Texas in 1970.

In her 2002 memoir, George wrote that a male friend told her sportscasting wouldn’t work because it was a man’s job. George even acknowledged knowing nothing about the industry and having no experience nor another female mentor to follow.

None of it stopped her. 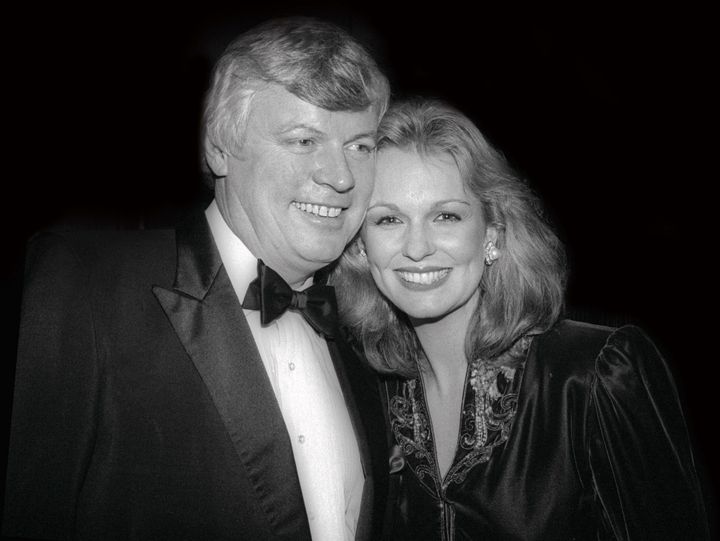 George was a friend of minister Norman Vincent Peale and a devout believer in his best-selling philosophy of positive thinking, George credits that approach for launching a defining career she didn’t expect — one that saw her range into an astonishing variety of ventures and roles, in media, the film industry, food and beauty products, and as the glamorous first lady of the bluegrass state.

“Saying yes to yourself opens up opportunities that can take you anywhere,” George wrote. “Having a mentor in your life who says yes to you is also key. Appreciate your mentors when you’re starting out. And later, always give credit to the people who were there with you at the beginning.”

ESPN sportscaster Hannah Storm remembered George as “the ultimate trailblazer” who inspired other women by showing that careers in sportscasting could be within their grasp.

“A lot of times when you’re dreaming of something as a career option, you have to see it in order to believe it,” she said. “And someone has to be first, and that was Phyllis.”

Neal Pilson, a former president of CBS Sports, called George’s hiring as part of “The NFL Today” team a “groundbreaking decision” that “changed the face of sports television.”

“She had an openness and enthusiasm that made her a valuable contributor,” Pilson said. “She didn’t claim to know a tremendous amount about sports, but she knew about people, which is why her interviews resonated. She could do the best interviews with athletes and family members. She was a warm person and that came through on the set and in the interviews.”

“People were uncomfortable with the idea of seeing a woman on TV talking about sports in a prominent role,” Storm said. “But someone has to go first. I give her so much respect for truly her courage. She had to put herself out there. Phyllis George did something out of the norm. And I’m forever grateful for her leading the way.”

George wasn’t the first but made her entrance around the time that other women were getting their starts reporting on sports, too.

Jane Chastain was hired at CBS in 1974 and became the first female announcer on an NFL telecast that fall.

Lesley Visser became the first female NFL beat writer during a 14-year career at The Boston Globe that started in 1974. She later worked on “The NFL Today” as well as ABC and ESPN, becoming the first woman assigned to “Monday Night Football” in 1998.

Visser said George “always made you feel important and warm. I never heard her talk about anyone in a negative way. She made everything look so easy. She had a magnetic personality.”

The industry discovered George after she co-hosted “Candid Camera” and the Miss America pageant. She received a 13-week option from CBS in 1974 without a defined role. But a popular interview with reluctant Boston Celtics star Dave Cowens soon earned her a three-year deal and paved the way to her breakthrough role the next year on “The NFL Today.”

George moved on to co-host the “CBS Morning News” in 1985 but quit after less than eight months. Among the people she interviewed was former first lady Nancy Reagan. She later interviewed President Bill Clinton in 1994 as part of her own prime-time talk show.

As a businesswoman, George founded “Chicken By George,” an eight-item line of fresh, marinated chicken breast entrees, and sold it two years later to Geo. A. Hormel & Co. She created “Phyllis George Beauty” in 2003. The cosmetic and skincare product line was sold through a TV home shopping network.

She also wrote several other books and had roles in a pair of Hollywood comedy films.

“Phyllis is a pioneer. Her range is what impresses me the most,” former Kentucky and Louisville coach Rick Pitino, now at Iona, wrote in the foreward to her memoir, “Never Say Never: Ten lessons to turn you can’t into YES I CAN.”

“She entered a highly competitive pageant and emerged as Miss America,” Pitino wrote. “She became the first national female sports broadcaster. She flourished in the limelight as First Lady in the state of Kentucky. She’s been successful in business. And she is a respected humanitarian. Each step along the way, she embraced the mission at hand.”