Plant extracts could hold the key to curing hangovers

Nature’s hangover cure: Juice made from ginger root, Barbados cherry and prickly pear can relieve headaches and nausea caused by drinking too much alcohol, study shows

Plant extracts could hold the key to curing the headaches and nausea that are associated with drinking too much alcohol, a study has found.

The findings contradict the popular concept that hangovers are caused by a lack of electrolytes in the body — a combination of minerals that help balance acid levels.

Researchers found that people who drank certain soluble plant extracts and minerals after alcohol had fewer symptoms than those who just consumed the minerals. 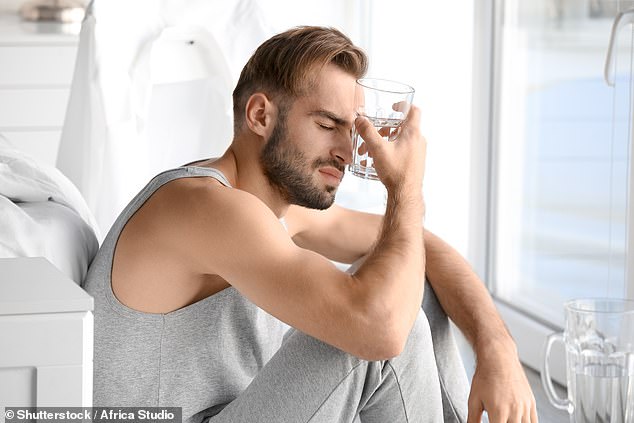 Plant extracts could hold the key to curing the hangovers that are associated with drinking too much alcohol, a study has found. Headaches and nausea experienced after drinking is thought to be caused by a lack of electrolytes in the body

The study was undertaken by molecular physiologists Bernhard Lieb and Patrick Schmitt of the Johannes Guttenberg University in Germany.

Each of the volunteers were given the drink both 45 minutes before and immediately after they stopped drinking beer, white wine, or white wine spritzer.

A second group of 76 people were given a version of the supplement without the plant extracts, while a third group of 69 participants received a placebo.

The team found that the intensity of hangover symptoms varied wildly among all the participants.

However, those who had taken the plant and mineral mix reported that headache intensity was around 34 per cent less on average than those who took the placebo, while their nausea was 42 per cent less severe.

At the same time, the full supplement-takers reported that their feelings of indifference fell by an average of 27 per cent and restlessness by 41 per cent.

No significant difference in any symptom was reported by those taking the supplement minus the plant extracts, suggesting that plant extracts were largely responsible for the observed changes, the researchers said.

Each of the five plant extracts contained polyphenol and flavonoid compounds that previous studies have associated with a reduction in the impacts of alcohol, the researchers noted — although it remains unclear how they work.

‘The underlying mechanisms remain to be unravelled and surely need further investigation,’ the duo concluded.

The team also found that the levels of water content in the participants’ bodies were not significantly associated with the amount of alcohol they had drunk.

‘Our results suggest that alcohol-induced increased fluid excretion does not necessarily lead to a significant dehydration process,’ the researchers wrote.

‘It seems to be clear that hangover symptoms are predominantly caused by alcohol and its metabolites.’

The full findings of the study were published in British Medical Journal Nutrition Prevention and Health.