Police have identified 11 alleged victims of a Melbourne immigration agent accused of drugging, raping and filming women across the state over seven years.

Frank Hu, 34, who ran a string of migration and travel agencies under the name Lakenest Group, allegedly lured many of his victims to his CBD office under the pretense of a job interview.

He was initially charged with 13 counts of rape relating to one victim. 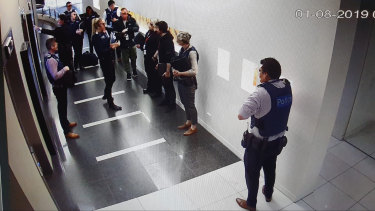 Victoria Police and the Australian Border Force raid the offices of Frank Hu.

But court documents released to The Age on Friday show Mr Hu, also known as Xiadong Frank Hu, is now facing 235 separate charges relating to 12 different victims. The crimes are alleged to have occurred between 2013 and 2019.

Video and photographic evidence is still being analysed by police.

Of the hundreds of charges, 136 relate to a woman who can be identified only as victim one.

Police alleged she was repeatedly drugged, raped and sexually assaulted between April 2015 and June 2019.

Another woman, known as victim two, was allegedly drugged, raped and sexually assaulted between December 2013 and July 2019 at places including the inner-eastern suburb of Kew.

Some of the other victims were allegedly drugged, placing them in danger of death, while others were both drugged and sexually assaulted at places including Mildura, in the state's north west, and Tullamarine.

Court documents show that one person, known as victim six, went into cardiac arrest after allegedly being drugged without her consent on July 23, 2019.

Mr Hu has also been charged with possessing child abuse material and committing an act of bigamy at Glen Waverly in August 2014.

During a brief hearing in the Melbourne Magistrates Court on Friday, Mr Hu expressed, through a Mandarin interpreter, that he was upset the media had reported details of his case after he was unsuccessful in obtaining a suppression order late last year.

He said he had since been "assaulted by other prisoners".

The court heard Mr Hu's former lawyer had withdrawn from the case.

The accused man was warned the prosecution would not consent to adjourning the case further after he appeared without legal representation.

A triple zero call about an unconscious woman found in a CBD office tower in July last year sparked the police investigation.

The matter is due to return to court in May.