Police respond to “active shooter” at supermarket in Boulder, Colorado

Colorado police warned residents on Monday about an active shooter at a King Soopers grocery store in Boulder. The details of the situation aren’t yet clear — but CBS Denver helicopter footage showed a man without a shirt being escorted out of the store in handcuffs.

At 2:49 p.m., the Boulder Police Department warned residents of an active shooter on Twitter.

CBS Denver said dozens of police and first responders were gathered outside the building. The front of the store appeared to be damaged. 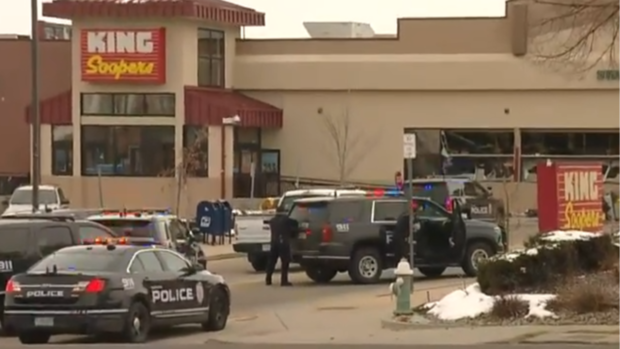 A witness told CBS Denver that he started hearing loud bangs while inside the store. At first, he said, he thought someone had dropped something — but by the third, people started running. He said the store was “decently crowded,” but expressed relief that there weren’t more people inside.

“I can’t believe it’s happening in Boulder,” he said.

CBS Denver video showed a handcuffed, shirtless man who appeared to have blood on his right leg being escorted away by police. The station reported he was transported to a local hospital.

Governor Jared Polis said he is monitoring the situation. “Like my fellow Coloradans, I am closely watching unfolding events at King Soopers in Boulder. My prayers are with our fellow Coloradans in this time of sadness and grief as we learn more about the extent of the tragedy,” Polis tweeted.

This is a developing story. Please check back for updates.