Home » Lifestyle » Premature celebrations, a terrible tie, and another bit of backup magic from Nick Foles — here are all of the best moments and GIFs you might have missed from Week 3

Premature celebrations, a terrible tie, and another bit of backup magic from Nick Foles — here are all of the best moments and GIFs you might have missed from Week 3 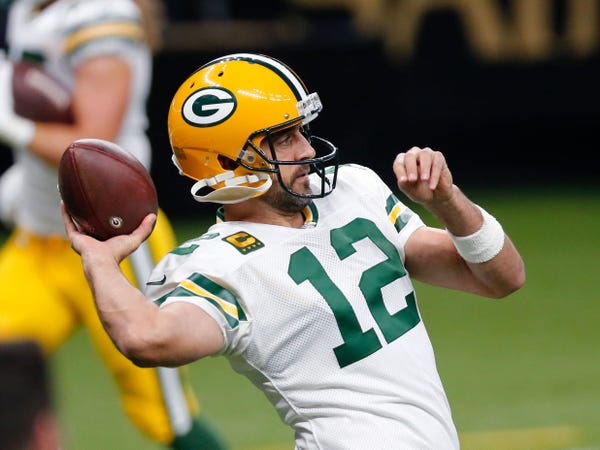 Week 3 of the NFL season was a lively one, presenting the best the sport has to offer.

Some backup heroics, astounding quarterback play from some early MVP contenders, and one Cam Newton GIF that should be around for years to come.

Below, we go game-by-game to take you through all of the big moments you might have missed from the third weekend of the NFL season.

The Chicago Bears gave the Falcons their second straight heartbreaker after backup quarterback Nick Foles came into the game in the second half and threw for three touchdowns in the fourth quarter to complete an unlikely comeback.

Foles' effort was helped along by some magnificent individual play from wide receiver Allen Robinson.

For the game-winning throw, Foles connected with Anthony Miller, taking a lead that the Bears would not concede again.

The Bears are off to a 3-0 start, and it feels likely that Foles will be the team's starting quarterback moving forward. It's tough to get benched after leading your team to an undefeated start to the year, but for Chicago, putting Trubisky aside looks like the right move.

Los Angeles rallied back to take a 32-28 lead over the Bills heading into the final minutes of the game, with Buffalo quarterback Josh Allen needing to orchestrate a game-winning drive to keep his undefeated season alive.

Unlike the Falcons, the Bills were able to scrape their way back to victory.

The biggest play of the Bills comeback drive came on 3rd and 22, with Allen connecting with Cole Beasley to pick up a crucial first down.

A few plays later, Allen would seal the game with a perfect touch pass to tight end Tyler Kroft.

Don't look now, but the Bills might be a top five team in the NFL.

Cleveland took care of business against Washington, maintaining their lead through much of the game and taking advantage of three costly interceptions thrown by Football Team quarterback Dwayne Haskins.

Overall, the game was something of a snoozer, but Kareem Hunt did make this catch which was nice.

Back in Week 1, Titans kicker Stephen Gostkowski made a mess of himself on national television, missing four kicks against the Denver Bronocos before finally saving himself from an instant firing by hitting a game-winner as time expired.

That game alone was enough of a story arc to last for an entire season, but since then, Gostkowski has only made things more dramatic. In Week 2, Gostkowski hit another game-winner in the final seconds to move the Titans to 2-0.

Then on Sunday, Gostkowski pulled off one of the most brilliant kicker performances we'll see all season, drilling six field goals including a 51-yarder early in the second half and shots from 54- and 55-yards out in the final seven minutes of regulation.

The New England Patriots controlled much of the game on Sunday against the Las Vegas Raiders, with running back Rex Burkhead leading the charge with 49 yards rushing, 49 yards receiving, and three total touchdowns.

With Burkhead carrying the load on Sunday, Cam Newton slinked away for a break.

This GIF, which will likely be used for years to come, was undoubtedly the highlight of Sunday's game.

The San Francisco 49ers had lost roughly half of their starters to injury over the past two weeks, but that didn't stop them from marching into MetLife Stadium for the second straight Sunday to tell a New York team to kick rocks.

Backup quarterback Nick Mullens had a game to remember, throwing for 343 yards and a score as the 49ers wound up running away with the game. While he had a great game, Mullens best highlight came when he politely reset a pylon in the end zone.

Running back Jeff Wilson Jr. also made a case for himself to earn a larger role within the offense. Pick him up in your fantasy leagues if you're in need of some depth at running back.

In what was undoubtedly the most painful game to watch on Sunday, the Eagles and Bengals played to the first tie of the 2020 NFL season.

At the end of an absolute slog of a game against the Cincinnati Bengals, the Eagles found themselves lining up a 59-yard field goal attempt with 19 seconds left in overtime.

But before Jake Elliot even got the chance to put up his kick, the Eagles bumbled away their chance at victory. As the field goal unit prepared for the snap, lineman Matt Pryor jumped early. The Eagles were moved back five yards, and rather than attempt a 64-yard field goal to win the game, opted to punt the ball, settling for a tie.

The mood of Eagles fans around the country was captured by radio play-by-play announcer Merrill Reese, who was incredulous.

"Oh my goodness," Reese said of the penalty. "Oh, on a field goal to win it?"

Despite the terrible tie, things somehow still worked out for the Eagles — every other team in the NFC East lost on Sunday, meaning Philadelphia actually gained ground on the division with their split game.

The Texans are off to an 0-3 start to the season. Admittedly, it's tough to win games when opposing wide receivers are so open that they can start their touchdown dance at the 20-yard line.

You have to feel for the Houston Texans, who started their season with as challenging a schedule as you could dream up, facing off against the Chiefs, Ravens, and Steelers through the first three weeks of the season.

Better things should be ahead for Houston, but for now, they are still searching for their first win of a tough year.

This attempted hurdle by Jets running back Kalen Ballage is a pretty good metaphor for how the season is going so far for New York.

After losing superstar running back Christian McCaffrey, the Panthers turned to Mike Davis to step up into the role.

Davis answered the call with aplomb, going off for 91 total yards and a score with some joystick moves out of the backfield.

Congratulations to the Panthers, and specifically to Matt Rhule for his first win as an NFL head coach.

Tom Brady had his best game as a Buccaneer on Sunday, throwing for 297 yards, three touchdowns, and zero picks.

If you had any remaining concerns as to whether or not Brady's 43-year-old arm could still place a pass, let this absolutely nutty throw to O.J. Howard assuage those fears.

Tampa is 2-1 and in the driver's seat in the NFC South. Look out.

After two fantastic games to start the year, Cardinals quarterback Kyler Murray didn't look like himself on Sunday against the Lions.

Detroit took advantage of Arizona's off-day on offense, with kicker Matt Prater sending home a game-winner in the final seconds.

That mantra has guided the Seattle Seahawks through the start of the 2020 season, and so far, it's working. Russell Wilson has thrown for 14 touchdowns through three games, including five against the Cowboys on Sunday.

He would have had six if not for DK Metcalf prematurely celebrating this trot into the end zone.

Thankfully for Metcalf, he got the chance to make up for his error, and wound up catching the game-winning touchdown in the final minutes of the game.

Seattle is 3-0 and playing like a juggernaut. Russell Wilson is coming after his MVP votes.

Aaron Rodgers and the Green Bay Packers dispatched the New Orleans Saints on Sunday night. If Rodgers is going to keep putting up passes like this, the Packers are going to be tough to stop this year.

And there's more in store for Monday night.

While we've already had plenty of action through three weeks of NFL football, Monday night's showdown between the Chiefs and Ravens should be a contender for game of the year.

With Patrick Mahomes, Lamar Jackson, Tyreek Hill, J.K. Dobbins, and more all in action, there's sure to be plenty more highlights on the way.