The Cambridge children’s behaviour in the ‘clapping for carers’ video reflects their individual roles within their sibling group, according to experts.

‘Leader’ Prince George, six, is setting an example for Princess Charlotte, four, and one-year-old Prince Louis, who, as the baby of the family, looks to his older siblings for reassurance that he is performing the task correctly. 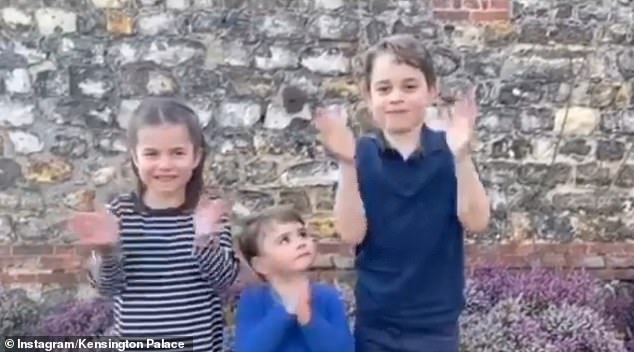 Seeking reassurance: Prince Louis is seen looking to his big brother George for guidance during the ‘clap for carers’ clip shared by Kensington Palace last night

‘As with any youngest child, Prince Louis is looking to his older siblings for reassurance, leadership and confidence,’ Angela explained.

‘This will happen until they find their own feet and strength to be who they are supposed to be.

‘The beauty of the youngest child is there will be a little bit of everyone in the family’s influence that they take into the world with them as they grow and learn.’

Judi added: ‘Prince Louis stands in the middle between his two older siblings, super-keen to join them in a very grown-up way too, with his serious facial expression showing he’s keen to get it absolutely right.

‘He’s also clearly seeing his two older siblings as role-models here, looking up at each of them in turn to check he’s copying them correctly.’ 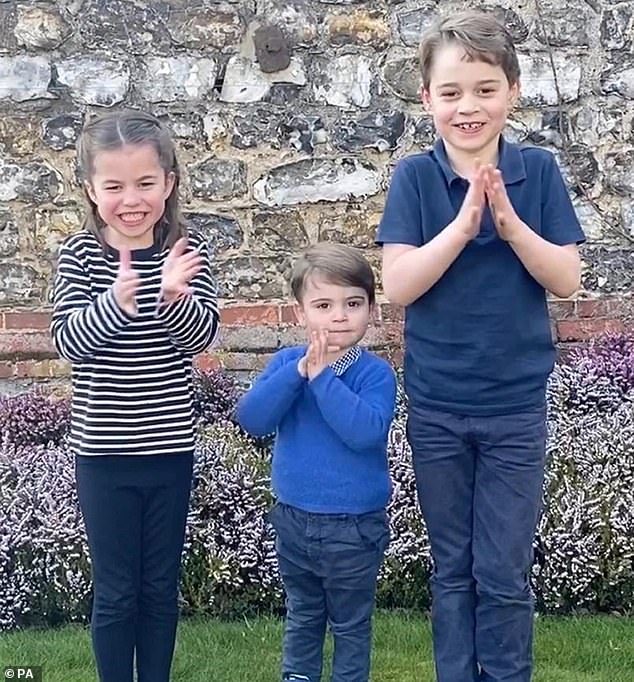 Setting an example: Prince George’s role both as the eldest brother – and future king – means he has been imbued with a sense of leadership from a young age, Angela noted

Prince George is seen beaming for the camera as he confidently claps on his brother’s left-hand side.

Royal siblings who are close with their own individual personalities

Angela noted that Prince William and Kate Middleton appear to be doing an excellent job in fostering their children’s individuality, while Judi noted the video reveals just how well they get on as a group.

Angela said: ‘What I do love though is that all three royal children seem to be learning their way with their individuality allowed to shine and guided by their mother. Children learn and develop first from us as parents, and then from their older siblings. That hierarchy does certainly get challenged as they get older and their individual personalities break free.’

His role both as the eldest brother – and future king – means he has been imbued with a sense of leadership from a young age, Angela noted.

‘For us as parents, when we have our first child we are worried about everything and scared of doing things wrong so we end up putting a lot of pressure on our first child. We want them to be the prefect child, we want to be our own take on the perfect parent.

‘Who else has a multitude of pictures and documented evidence in baby books for their first child’s first sneeze, giggle and broken fingernail but for the second child – zilch, nothing, zero!

‘When it comes to our Royal Family, there will naturally be an added pressure on Prince George as he will be King one day and so those expectations of leadership that naturally befall the eldest child will be coupled with expectations for him to eventually lead our country.’

Judi added: ‘George is clearly the sibling wanting to come across as the most grown-up and focused, keeping his eyes to camera and clapping away without distraction, although his slightly scrunched-up shoulders and the way he keeps his hands up close to his face suggest he’s secretly as excited to be doing this as his younger siblings.’ 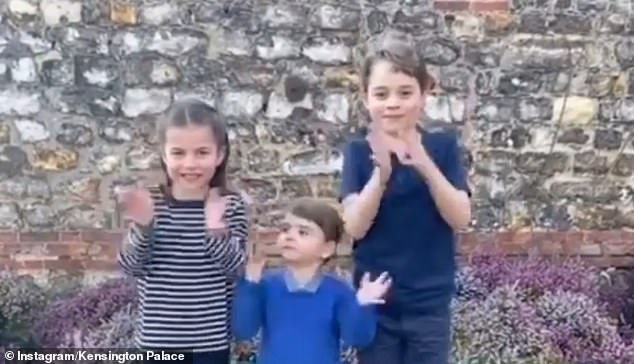 Free spirit: As the second child, Princess Charlotte is likely to have enjoyed greater freedom than her older brother. Pictured, Charlotte smiling with George and Louis in the video

As the second child, Princess Charlotte is likely to have enjoyed greater freedom than her older brother. This is likely to shine through in her happy-go-lucky personality, Angela explained.

‘By the second child, we have relaxed and so we don’t place such high importance on the perfectness of parenting – because we know it doesn’t exist as we exhausted ourselves trying to find it the first time round.

‘So the second child, like Princess Charlotte, is allowed a little more freedom to run, walk and speak at their own pace and in their own way. So of course this shines through in their personality.’

Judi added: ‘Charlotte is more active, laughing and giggling and using an eye-dart gesture to suggest she’s possibly the most playful and adventurous sibling.’