Queen Letizia of Spain shows off her summer style in Mallorca

Masked in Mallorca! Queen Letizia of Spain looks chic in a red dress and espadrilles as she enjoys a family holiday amid scandal surrounding ‘banished’ former king Juan Carlos

Queen Letizia showed off her summer style as she visited the birthplace of XVIII century Spanish priest and friar of Franciscan Order, Junipero Serra in Petra, Mallorca.

The Spanish royal, who was accompanied by King Felipe VI and their daughters Crown Princess Leonor, 14, and Infanta Sofia, 13, appeared in good spirits as they continued their summer break in the Balearic Islands.

The holiday is the family’s first public appearance since former King Juan Carlos announced he was leaving Spain amid the ongoing corruption scandal.

Sayn-Wittgenstein has been placed under investigation in relation to audio recordings of a meeting between herself and retired Spanish police commissioner José Manuel Villarejo at her home in 2015.

The 82-year-old revealed on Monday that he had decided to leave Spain to help his son, the current King Felipe VI, ‘exercise his responsibilities’.

But sources claimed it was King Felipe who cast his father out to save his family from ‘certain happenings’ relating to Juan Carlos’s relationship with his German mistress Corinna zu Sayn-Wittgenstein – with some fearing he might not come back.

In the recordings, she allegedly claimed Juan Carlos received a secret commission for helping to win a £5.5 billion Saudi rail deal.

Villarejo asked for a meeting under the pretense that Spain’s intelligence services were plotting to implicate her in criminal activity and went on to leak the tapes of their conversation to the media. 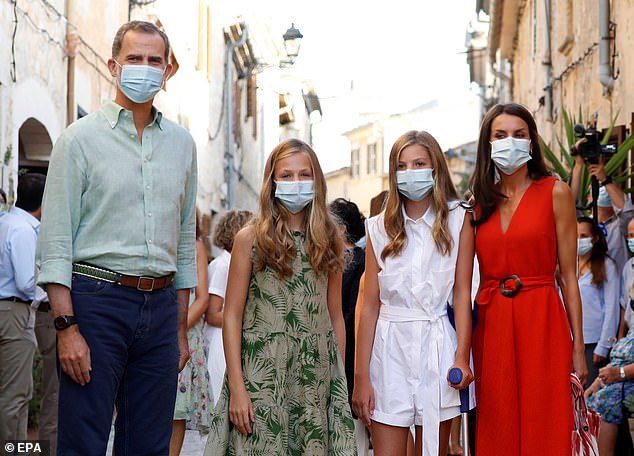 The Spanish Royals (pictured) visited the birthplace of XVIII century Spanish priest and friar of the Franciscan Order Junipero Serra in Petra, Mallorca 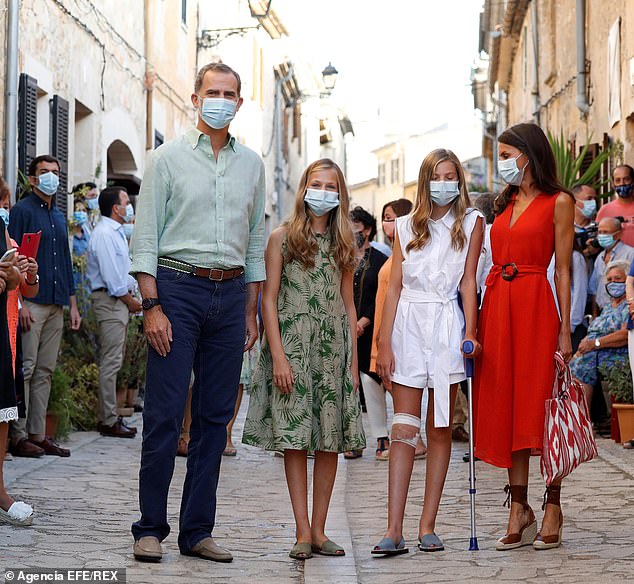 But Letizia, 47, looked in good spirits today as she donned a chic belted red dress with a plunging neckline and espadrilles for a trendsetting seasonal look, while also putting safety first in a face mask.

The royal styled her glossy brunette hair straight with a slightly off-centre parting, similarly to how her daughters had opted to wear their own.

Infanta Sofia, 13, braved the outing in a white play-suit and sandals with the support of a crutch after injuring her right knee and requiring stitches.

She was seen at times being assisted by her sister as she walked through the streets of Petra. 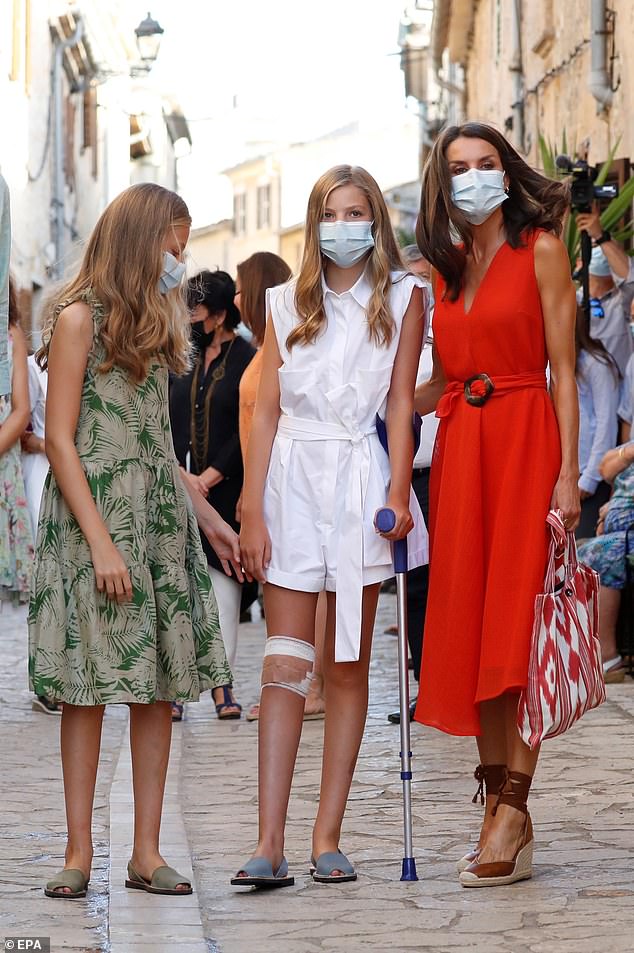 Queen Letizia stunned in a sleeveless red dress and espadrilles, coordinated with a red and white canvas bag. Pictured: The Royal alongside her daughters

The family who are staying at the Marivent Palace during their time in Mallorca, were seen admiring historic artifacts at the birthplace, museum and convent of Fray Junípero Serra in Petra.

Their tour began with sightseeing of the notable figure’s birthplace on Barracar Alt Street, before journeying to the museum created by Pare Serra Friends Association in 1959.

The site is home to paintings, medals, prints, photographs and other items of significance related to Fray Junípero Serra’s work in the American missions. 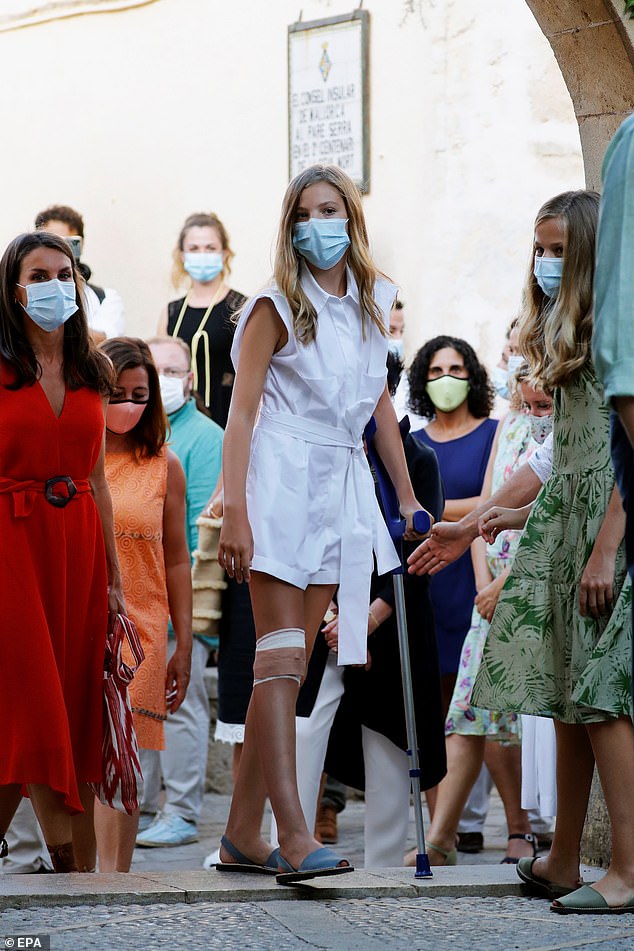 Infanta Sofia, 13, (pictured) walked with the support of a medical crutch during the visit to the historical site after injuring her right knee 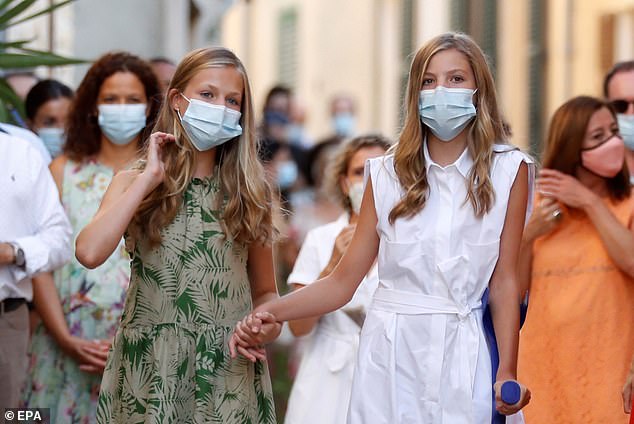 The Spanish Royals had their photographs taken next to the stone plaque commemorating the presence of their time in Petra and signed the museum’s book of honour.

They then visited the last place where Pare Serra is said to have preached before going to America, Santuari de la Mare de Déu de Bonay.

The family said their goodbyes to the authorities who joined them throughout their tour, while viewing the sanctuary which dates back as far as the seventeenth century.

Locals wearing face masks gathered in the streets to snap photographs of the royals as they practiced socially distanced greetings. 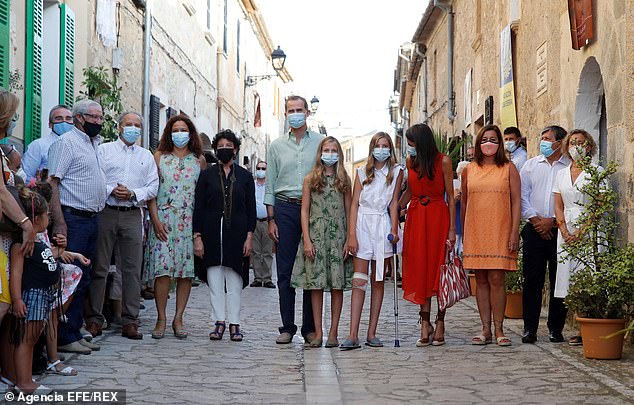 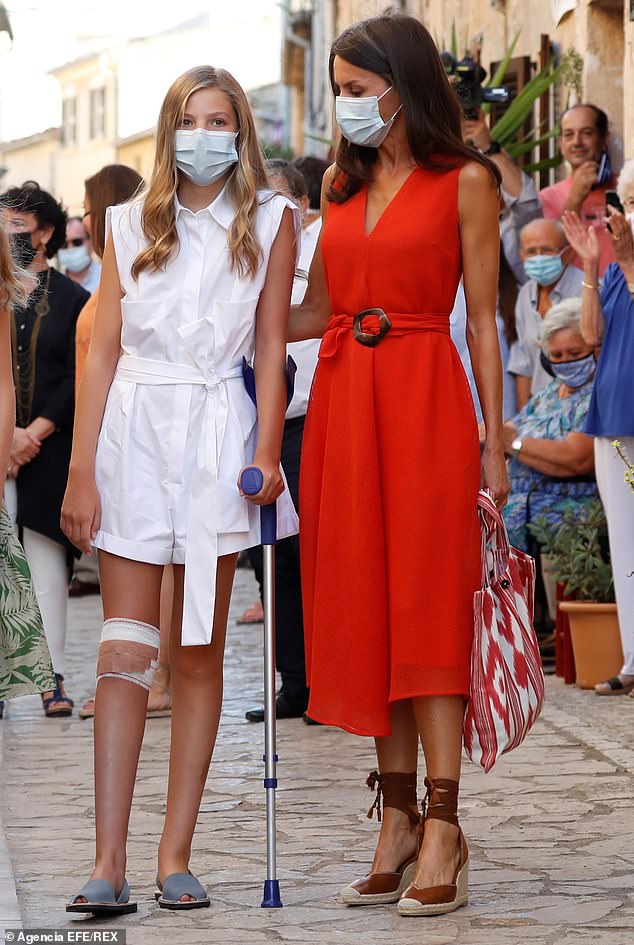 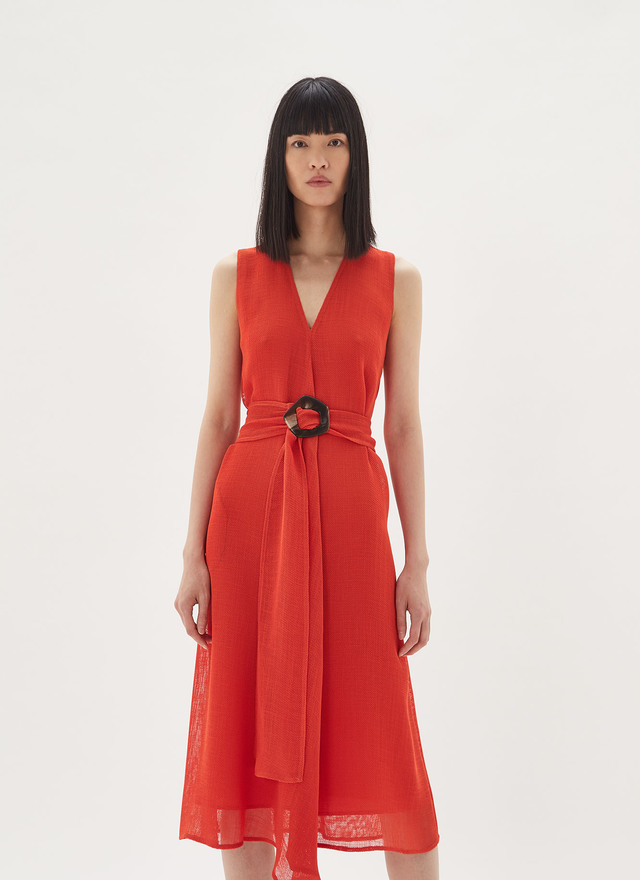 Felipe VI became King of Spain in 2014 following the abdication of his father Juan Carlos whose whereabouts is currently unknown.

The Spanish Royal Household has declined to comment on Juan Carlos’s location since he announced that he was going into exile last Monday.

It has been alleged that the former King is hiding out in a £10k-a-night suite at a luxury Abu Dhabi hotel after fleeing amid the ongoing corruption scandal. 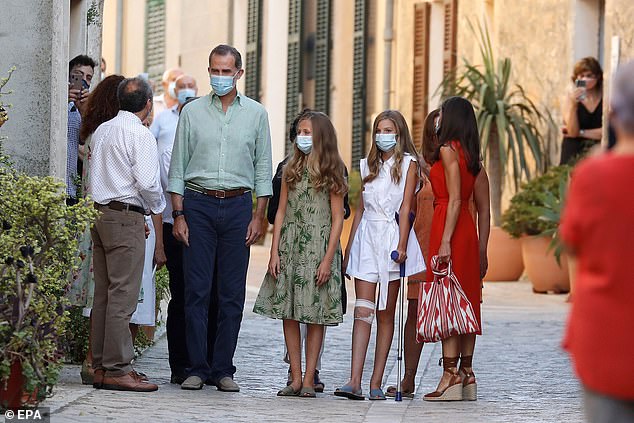 Felipe VI who has been king of Spain since 2014, also took time to meet a number of politicians during the day as his father’s exile continues to dominate headlines 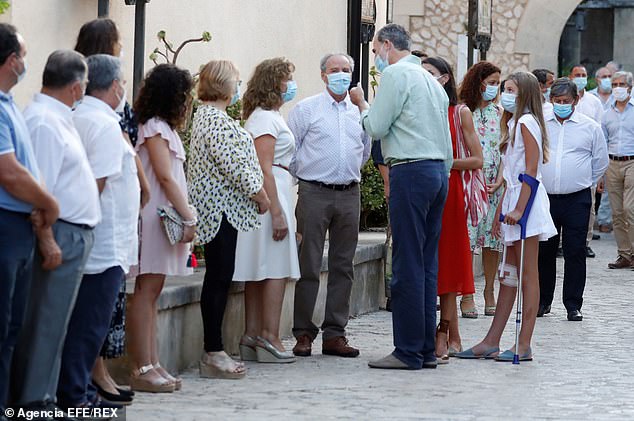 King Felipe VI appeared polished in navy trousers and a mint green shirt, as he interacted with those gathered at Petra 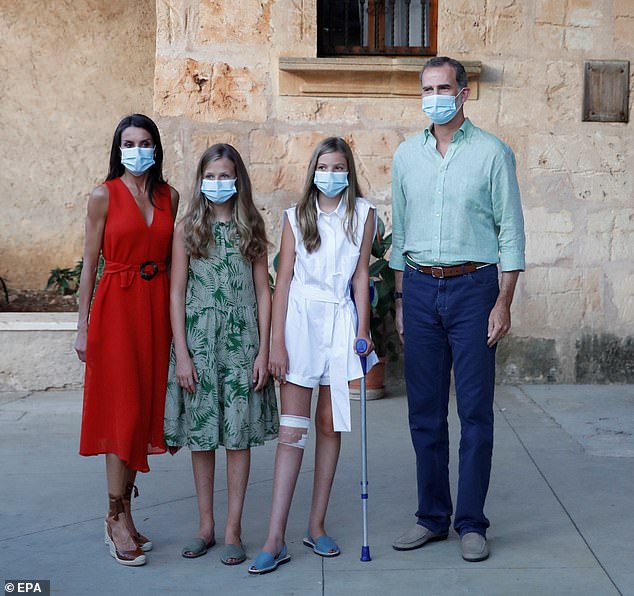 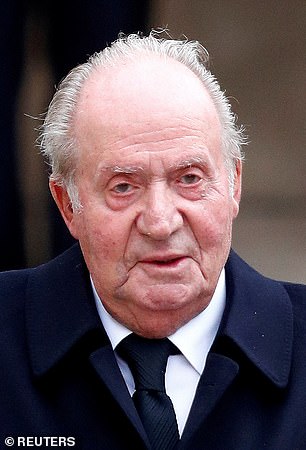 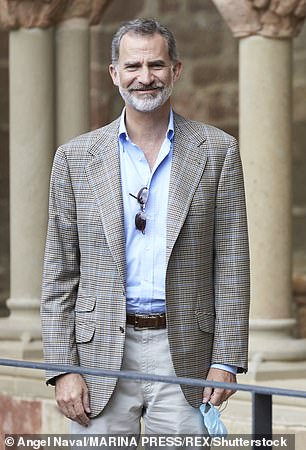 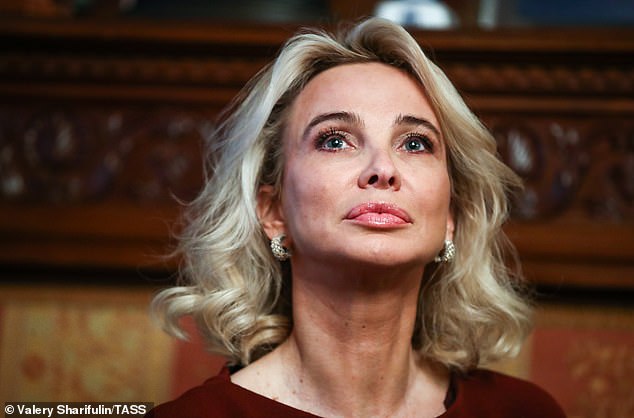 Corinna zu Sayn-Wittgenstein, pictured above in 2019, is the former mistress of Spain’s Juan Carlos

Who is Spain’s former king, Juan Carlos I? 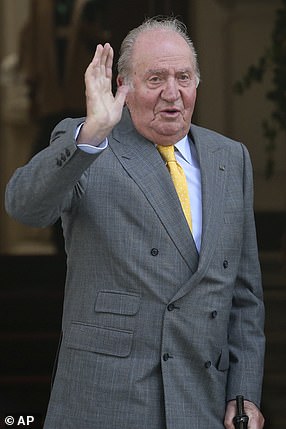 Juan Carlos I reigned as king of Spain from November 1975 until his abdication in June 2014.

He was a popular monarch for most of his four-decade reign who played a critical role in the country’s transition to democracy.

He is the grandson of Alfonso XIII, the last king of Spain before the abolition of the monarchy in 1931 and the subsequent declaration of the Second Spanish Republic.

Juan Carlos was born in Rome, Italy, on January 5, 1938, during his family’s exile. He came to Spain in 1947 to continue his studies and entered the Zaragoza military academy.

He completed his tertiary education at the University of Madrid and went on to marry Princess Sofia of Greece and Denmark in Athens in 1962.

They went on to have two daughters and a son together: Elena, Cristina, and Felipe.

Juan Carlos was hailed for his role in Spain’s transition to democracy and reforms to dismantle the Francoist regime.

However the King and the monarchy’s reputation began to suffer after controversies surrounding his family arose.

In April 2012, Juan Carlos faced criticism for an elephant-hunting trip in Botswana during a time of financial crisis in Spain. 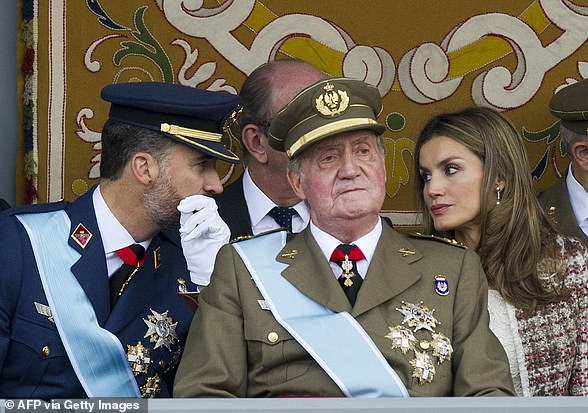 The public found out about the trip only after the King injured himself and a special aircraft was sent to bring him home.

Spanish officials stated that the expenses of the trip were not paid by taxpayers or by the palace, but by businessman Mohamed Eyad Kayali.

Corruption scandals circling the royal family closed in when his daughter, Princess Cristina, was accused of tax fraud in 2014 and became the first Spanish royal to stand trial. She was later acquitted, but her husband was sentenced.

He abdicated in favour of his son, Prince Felipe, in 2014, and last year, Juan Carlos announced his decision to withdraw from public life, ending his remaining institutional functions and appearances from June 2019. Last August, he successfully underwent heart surgery in Madrid.

In June 2020, Spain’s supreme court prosecutor opened an investigation into Juan Carlos’ involvement in a high-speed rail contract in Saudi Arabia that was granted to a group of Spanish companies in 2011.

King Felipe renounced his own inheritance and stripped his father of his palace allowance in March after reports the latter received $100 million from the late Saudi king and gave millions to a businesswoman.