Cuckoo wasps are the ultimate bad houseguests, hiding their eggs in other insect’s nests and then allowing them to hatch and eat their ‘siblings.’

Researchers in Norway were able to identify an entirely new cuckoo wasp based on a single specimen.

To infiltrate the homes of unsuspecting wasps, the killer insects mimic their hosts’ pheromones—and to avoid inbreeding, each species of cuckoo wasp chooses a different host.

While the newcomer was visually and genetically almost identical to Chrysis brevitarsis, it spoke a different chemical ‘language,’ meaning it was an entirely new species 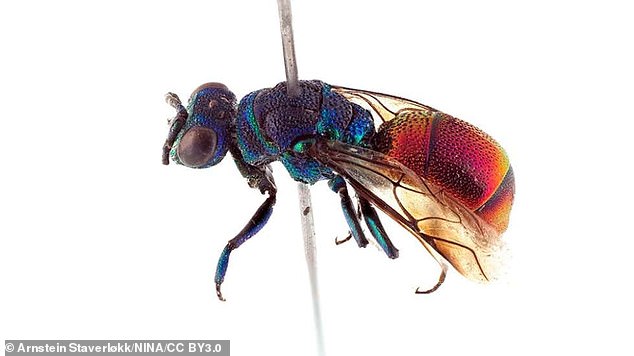 Researchers in Norway were able to determine Chrysis parabrevitarsis was a new species because it used a different ‘language’ than a nearly identical species. Cuckoo wasps infiltrate nests by mimicking their victims’ pheromones

Like the infamous cuckoo bird, cuckoo wasps deposit their eggs in other creatures’ homes—in this case, the hives of other wasps and bees.

Their larvae grow faster and hatch before the host’s eggs, allowing them to devour their hosts’ eggs, larvae and any food the host wasp has provided.

Entomologists have struggled to classify different types of these jewel-toned wasps for more than 200 years, since they appear so similar and even genetic differences are microscopic. 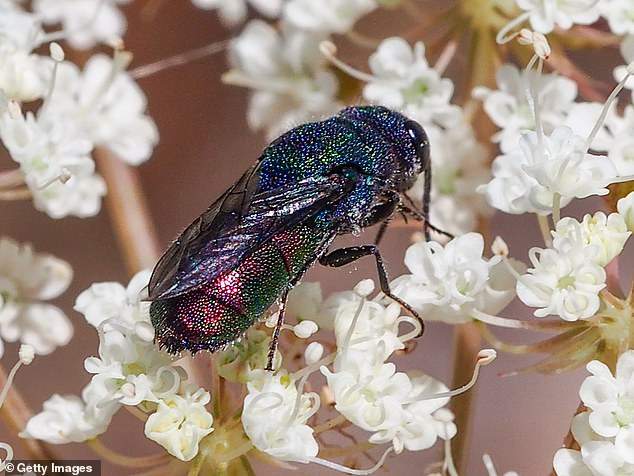 Cuckoo wasps, like this Chrysis sexdentata, despot their eggs in another wasp’s nest. Their larvae grow faster and hatch before their host’s offspring, allowing them to eat their adopted ‘siblings’

Researchers in Norway found themselves stumped by two cuckoo wasps, unable to determine if they were both Chrysis brevitarsis or if one was a new species.

‘Normally we distinguish insects from each other by their appearance, but cuckoo wasps are so similar to each other that it makes it difficult,’ said Frode Ødegaard, an entomologist at the Norwegian University of Science and Technology.

In the last decade, DNA barcoding has made it easier to distinguish different cuckoo wasps but it’s not 100 percent effective.

Their solution, described in a new report published in the journal Insect Systematics and Diversity, was to look at the ‘language’ the two wasps used.

In order to infiltrate their victims’ nests, cuckoo wasps learn to mimic the pheromones they emit to communicate with the rest of the hive.

WHY DO WASP STINGS HURT SO MUCH?

Wasp stings tend to occur in the later summer months when the colony’s social structure is breaking down.

At this time, the group mindset is changing from raising worker wasps to raising fertile queens, who hibernate over the winter to start new colonies the following spring.

Once the queen has laid eggs, she stops producing the hormone that keeps the colony organized.

This leads to the wasps becoming confused and disorientated and they tend to stray towards sweet-smelling human foods, like ice cream and jam.

Scare humans aggravate the insects with wafting hands and swatting magazines, making them prone to stinging.

It is designed as a self-defense mechanism but, unlike bees, wasps can sting multiple times.

The stingers remain intact and are often primed with venom which enters the bloodstream.

Peptides and enzymes in the venom break down cell membranes, spilling cellular contents into the blood stream

This can happen to nerve cells and these are connected to the central nervous system.

This breach causes the injured cell to send signals back to the brain. We experience these signals in the form of pain.

There are chemicals in the wasp sting which slows the flow of blood, which elongates the period of pain.

Wasp stings can be uncomfortable, but most people recover quickly and without complications.

‘That’s why you can have two species that are really similar genetically but still belong to different species.’

Because it’s so similar to C. brevitarsis, Ødegaard gave the new species the scientific name Chrysis parabrevitarsis, which means ‘the one standing next to brevitarsis’.’

C. parabrevitarsis is so rare that only a single specimen has been found, on a sand dune in the Lista peninsula on Norway’s southern tip.

It lives in forest clearings and makes its home in dead trees, according to the authors, and its preferred ‘victim’ is a subspecies of potter wasp.

Getting to name a species is a very special honor, he said.

‘In a way, you place yourself in the perspective of eternity, because that species will always have that name. There’s something very fundamental about it.’

Not all wasps are such moochers: In February, researchers in the UK reported on Neotropical paper wasps that ‘babysit’ for neighboring nests.

Paper wasps are named for the paper-like substance they create from chewed-up plant fibers to construct their nests.

Scientists at the University of Bristol studied some 20,000 baby paper wasps and their carers from 91 different colonies in Panama.

They found that, as colonies got larger, there was a surplus of labor that allowed some wasps to go off and help smaller colonies short on workers.

Since those distance colonies are still related, helping them thrive ensured the DNA they share with the ‘nanny’ wasp survives.

‘These wasps can act like rich family members lending a hand to their second cousins,’ said Patrick Kennedy, a research fellow in the School of Biological Sciences who examines animal altruism.

‘If there’s not much more you can do to help your immediate family, you can turn your attention to the extended family.’

Kennedy said the behavior was truly unusual ‘when you consider that most wasps, ants and bees are extremely hostile to outsiders.’