The jobs of more than a quarter of musicians in Opera Australia's orchestra have been axed in a move the players say will reduce its permanent strength to less than the size of Australia's smallest state symphony.

Sixteen players were informed of redundancy on Friday by the company's artistic director Lyndon Terracini in part of an operational restructure Opera Australia says is necessary to steer the company through financial troubles brought on by the COVID-19 lockdown. 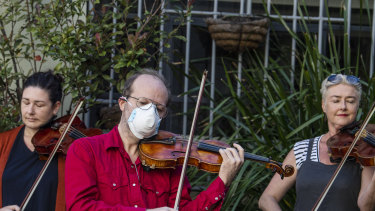 Members of the Opera Australia orchestra were stood down without pay in March.Credit:Louise Kennerley

Axed players included experienced musicians in the strings, woodwind and brass sections, principal players and those who played specialist instruments, according to the players' union, the Media Entertainment and Arts Alliance.

Cuts have also fallen in lighting, manufacturing and chorus. "Effectively there will be no full-time lighting technicians in the future, from what we can tell," Paul Davies, director of MEAA Musicians said.

On top of 13 unfilled vacancies, the redundancies would take the permanent strength of the orchestra to 40 players, a letter to Australian musicians obtained by The Sydney Morning Herald said. "This is smaller than the Tasmanian Symphony," it reads. "The result is that our orchestra would essentially cease to exist except in name, as we would become a semi-casualised ensemble."

Opera Australia did not challenge the assertion that the forced redundancies would dramatically affect the size of the permanent orchestra. The company instead expressed deep regret that valued employees were being made redundant across all areas of its organisation.

"Their expertise, commitment and talent would be sorely missed but these are massive issues that we face and will do for the foreseeable future," the spokesperson said.

"These are incredibly difficult times and we are very aware the decisions we have had to make have devastating consequences for many of our employees. However, it’s essential that we streamline the company in order to ensure its survival and therefore secure the jobs of countless artists and artisans for future years."

The nation's biggest performing arts company announced last month it was putting its Alexandria warehouse up for sale, having lost "multi-millions" due to cancellation of most of its 2020 season, including its flagship Opera on the Harbour event.

"We have certainly not taken these decisions lightly, exploring all options for a sustainable way forward with the enormous uncertainties that the COVID-19 crisis has thrown at us all." 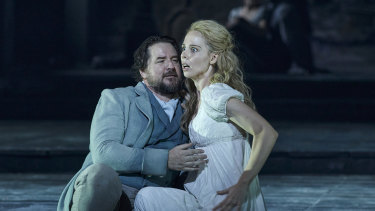 The cutbacks came on the same day that members of the Melbourne Symphony Orchestra voted to approve emergency measures that would reduce their wages to 80 per cent of existing levels until the end of 2021.

Mr Davies said management had a broader agenda to casualise the orchestra, chorus, technical and manufacturing departments. Careers would be destroyed and artistic standards reduced with no significant reduction in labour costs.

"There doesn't appear to be a discernible reason for where the cuts have fallen in an objective sense, including why certain people have been chosen for redundancy," he said.

The MEAA took Opera Australia to the Fair Work Commission, arguing a lack of proper consultation. The Commission found in favour of OA.

Opera Australia's spokesperson said opera was not a one-person show but a huge collaboration of artists with singers, orchestra, designers, producers and creative directors.

"The difficult decisions we make now will enable us to rebuild our presence on stages as and when we are able to at the artistic level to which we all aspire, recognising it will be some considerable time before we can hope to operate at the scale that we were prior to the pandemic."

Mr Davies said Opera Australia has foreshadowed its intention to abolish the enterprise agreement, which pays above award rates. Some redundancy decisions would probably be contested, he said.