Croatian carmaker Rimac’s new 1,900-horsepower electric Nevera hypercar goes from zero to 60 in under 2 SECONDS and can be yours for just $2.4 million

Croatian carmaker Rimac has unveiled the Nevara, its production-ready electric hypercar with a hefty price tag of $2.4 million.

Initially branded as The Rimac C_Two, the 1,914-horsepower two-seater was first teased at the 2018 Geneva Motor Show. (For comparison, a Chevrolet Corvette off the production line, for instance, has around 495 horsepower; a Malibu, around 160.)

The Rimac is powered by a 120kWh battery pack with a quad-motor system that Rimac says can get it to from standing to 60mph in a cool 1.85 seconds.

Only 150 Nevaras are being made, and owners will be invited to Croatia ‘to design his or her car to their exacting requirements,’ the company said. 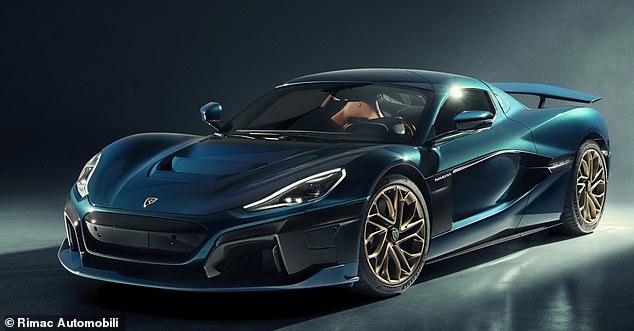 Per Rimac (pronounced ‘Rimatz’), the Nevara is named after ‘a quick, unexpected and mighty Mediterranean storm’ that races across the Adriatic Sea off the Croatian coast.’

A fitting name for a car that can reportedly race a quarter-mile in 8.6 seconds, zoom from standing to 186mph in 9.3 seconds and reach a top speed of 258 miles per hour—higher than any previous electric car.

‘Depending on the driving mode selected, the R-AWTV 2 technology can enable the Nevera to be drifted sideways or provide optimum levels of all-wheel-drive grip, traction and safety – no matter how challenging the road and weather conditions,’ said Rimac development driver Miroslav Zrnčević. 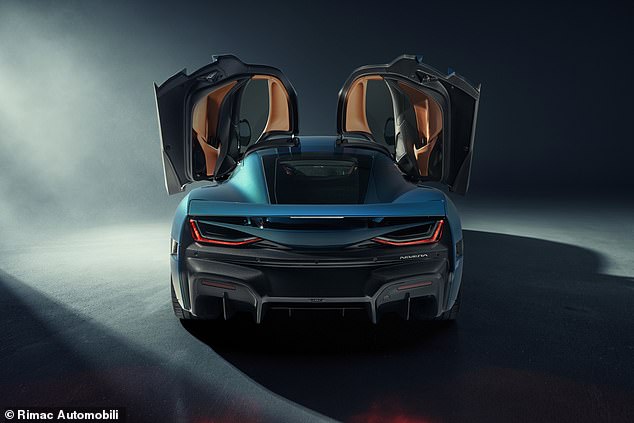 Starting in 2022, the Nevara will offer an ‘AI driving coach,’ with more than a dozen cameras, 12 ultrasonic sensors and six radars to ‘optimize and enhance the driver’s on-track performance’

The Nevera is also equipped with a complex electro-hydraulic braking system that can use brake regen to recoup some power on the move ‘or employ its 15-inch six-pot carbon-ceramic Brembos,’ according to Road and Track. ‘Because the brakes are not connected to the pedal, feel has been programmed in.’

The electric vehicle also pushes power steering to the next level with a steer-by-wire function enabling adaptive driver-feedback depending on the drive mode.

While Rimac isn’t touting the Nevara as an autonomous vehicle, it will boast an ‘AI driving coach,’ with more than a dozen cameras, 12 ultrasonic sensors and six radars to ‘optimize and enhance the driver’s on-track performance.’

Available in 2022 as part of an over-the-air upgrade, the AI driving coach will be able to suggest when to brake, turn into, or accelerate out of a corner, The Verge reported. 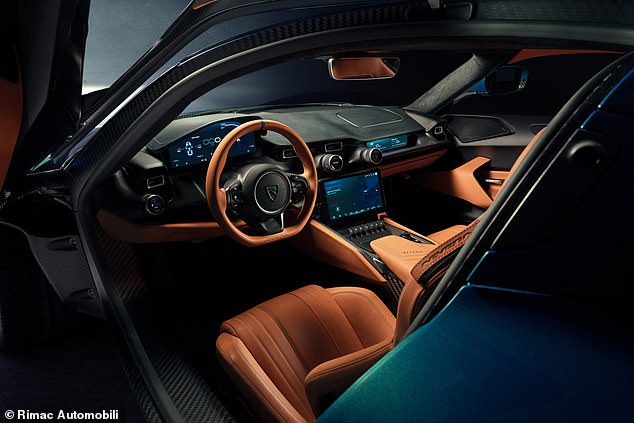 The Nevara’s dashboard, or ‘cockpit,’ features a trio of liquid-crystal displays that can be modified to show as much or as little info as the driver wants.

According to Rimac, it’s the largest single carbon fiber piece in the industry—helping to reduce its weight, keep the center of gravity low and improve overall structural stiffness.

And improvements in battery cooling allow the Nevara to run at high power for longer periods than the original Concept Two: it can reportedly go 340 miles between charges and reach an 80 percent charge in under 20 minutes.

The dashboard, or ‘cockpit,’ features a trio of liquid-crystal displays that can be modified to show as much or as little info as the driver wants. 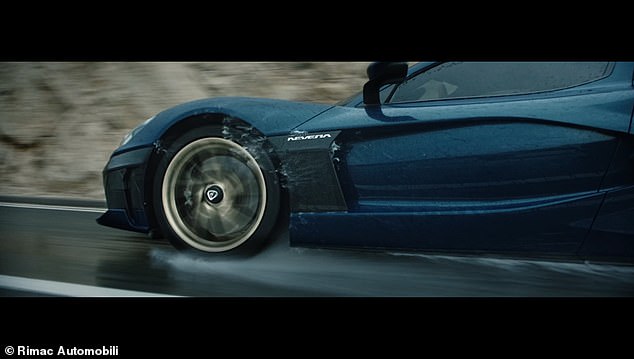 The Nevara is powered by a 120kWh battery pack with a quad-motor system that Rimac says can get it to 60 mph in a cool 1.85 seconds

The top segment is devoted to driving performance, while the lower half houses entertainment options, temperature and comfort controls and driving data.

Rimac Automobili founder Mate Rimac has even promised to personally test each Nevera that gets built.

‘This is it. This is the car I had in mind when I embarked on the ‘impossible’ journey 10 years ago,’ Rimac said in the press announcement. This car was born to outperform, and to raise the bar, redefining the norm for performance cars. And not only in performance – but as an all-around package.’