Roddy Ricch’s music career has seen accelerated success between the years of 2020 and 2021. Aside from having one of the biggest songs of 2020 with his single, “The Box,” the Grammy-winning rapper was also nominated a whopping six times at the 63rd Annual Grammy Awards ceremony. Unfortunately, Roddy didn’t take home any awards. Roddy wasn’t the only one feeling snubbed — previously, The Weeknd spoke out against the awards show. Additionally, one of Roddy’s idols, Kanye West, took his anti-Grammy campaign a little too far by urinating on one of his awards in September 2020. The “Late At Night” crooner took to Instagram Live in March 2021 to express his distaste in West’s actions in a loaded rant.

“If I get nominated for six Grammys and a n***a I look to that had 22, 23, 24, 25 of these motherf******s and I come in here, I get nominated for six this year, I feel like that’s a good number,” Roddy said at the time (via HotNewHipHop). “And this year this n***a just pissed on that s**t. Like, how you think that make the world look at my accomplishment, n***a? I did all this s**t and you pissing on s**t. That s**t be lame. I don’t really like that s**t.” The rant raised eyebrows among many of his fans, as few questioned if the two artists had beef. Almost two months after the livestream, Roddy is finally clarifying what he meant by his comments directed at West. 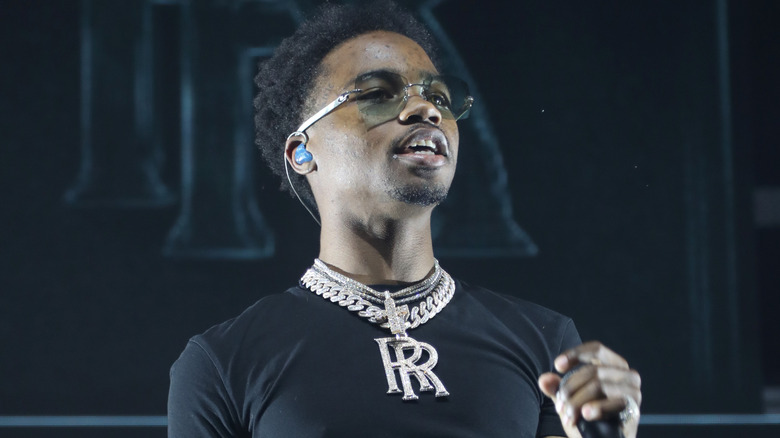 Have no fear, hip-hop enthusiasts: Roddy Ricch and Kanye West are not at odds with one another. After nearly two months of what seems to be reflection, Roddy is clarifying why he was so pissed about Ye urinating on a Grammy Award — pun intended. The rapper sat down with Big Boy’s Neighborhood to discuss the rant, and how he felt Ye’s stunt devalued the accomplishment as a whole. “What I was saying was, I grew up looking to a Kanye or Jay as like, ‘If I do this, I wanna have twenty [Grammys] because that’s what they did,'” explained Roddy.

“When I seen [Kanye] pissing on a Grammy, it kinda rubbed me wrong ’cause I was like, damn n***a, now that I’m getting nominated, I feel like everybody’s s**tting on the accolades. Now, it’s like it don’t even matter. Now that I look back on it, it’s like, I don’t really give a f**k about it like that. But in that moment, that’s more so what I was thinking. No disrespect to Kanye because he’s a legend. He’s the guy. I pulled up on him, we chopped it up so it ain’t no disrespect to him.”

Regardless of his personal opinions on West’s anti-Grammy stunt, Roddy has previously spoken of his admiration of the rapper. “He showed me there’s more to life than just music. He taught me [about] really building empires,” he explained to Complex. “He was building things that don’t got nothing to do with music, with different rooms having different ideas. Even building up a community or a civilization that can start and become something else. … It opened my mind.”