"You threw a fit in front of the crew, yelling, 'They don't pay me enough to do this s–t!' … I cried every time we got renewed because you made that set toxic AF," Rose McGowan alleged on Twitter. 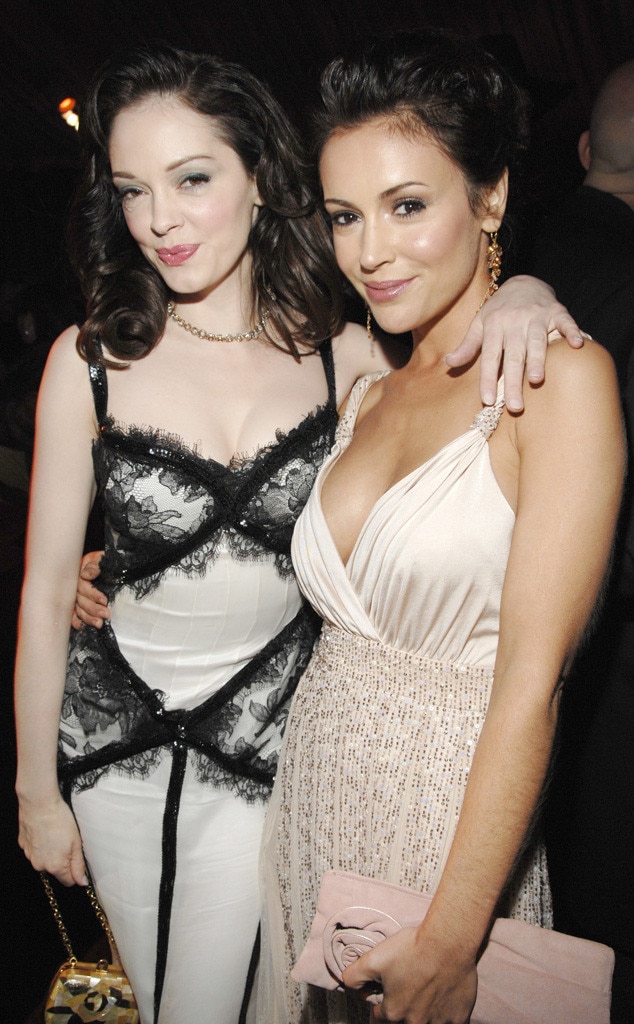 Rose McGowan didn't hold back on social media when talking about her alleged experience on the set of Charmed.

The 46-year-old actress accused her former co-star, Alyssa Milano, of creating a "toxic AF" work environment when they both starred on the hit WB show.

It appears the social media rift began on Friday, Aug. 21, following the final night of the Democratic National Convention.

Milano first tweeted "a thread of all the things the Democratic Party has done to make the world a better place."

In her post, the 47-year-old star began with the 19th amendment, writing, "Under the leadership of Democratic President Woodrow Wilson, the U.S. Constitution was amended to grant women the right to vote."

Shortly after, McGowan quote tweeted the message. "Ummm… did you conveniently forget only WHITE WOMEN got the right to vote? They betrayed all others," she shared. "To quote Marilyn Manson, 'I was not born with enough middle fingers.'"

"If I had been the leader of the Suffragettes, I would have waited and fought for EVERYONE'S right to vote. They f–ked up. And you wonder why Black Women think white feminists are frauds. Most are," McGowan continued.

Milano chimed in, "Rose and anyone bleating the same 'dEmOcRaTs DoNt HeLp PeOpLe' nonsense, your lies are going to hurt people less privileged than you. It's the kind of thing an ACTUAL fraud would do. Thousands of people are dying a day but you go on with your hyperbolic attention seeking tweets."

Moving away from politics, McGowan then accused Milano of appropriating the #MeToo Movement.

Robert Pattinson Makes Surprise Appearance Ahead of The Batman

"1) You stole #metoo (a brilliant communication tool, not a movement) from Tarana. You co-opted my movement, the Cultural Reset, for fame, jealous of me for outing my rapist. You made 250k per week on Charmed. (Con't)," the actress claimed.

McGowan then shared her alleged experience on the set of Charmed with her former co-star.

She tweeted, "2) You threw a fit in front of the crew, yelling, 'They don't pay me enough to do this s–t!' Appalling behavior on the daily. I cried every time we got renewed because you made that set toxic AF. Now, get off my coattails you f–king fraud."

McGowan later uploaded an interview clip from 2018, in which she told Nightline that she wasn't a fan of Milano's. "I don't like her… 'cause I think she's a lie," she said at the time.

Of the back-and-forth on social media, Milano said in a statement to E! News, "Hurt people hurt people. Commenting any further doesn't align with my wellness plan."

We have also reached out to McGowan's rep and Warner Bros. for comment, and have yet to receive a response from neither.

As fans will recall, the two actresses starred on Charmed together when McGowan joined the cast in the fourth season. Milano played Pheobe Halliwell, while McGowan played Paige Matthews.

The series ran from 1998-2006. Holly Marie Combs (Piper Halliwell) and Shannen Doherty (Prue Halliwell) were part of the original cast and starred in the first three seasons with Milano. When Doherty departed in 2001, McGowan became a lead.