When S.G. Goodman was growing up, her farmer father would plant an annual crop of sweet corn for his three kids, which they later harvested by hand and sold for money to buy their school clothes.

The farm isn’t Goodman’s home anymore: “I live in a house where the backyard is too shaded by these maple trees so that I can’t really grow anything,” she says. But the Murray, Kentucky-based singer-songwriter, 31, maintains a deep connection to the place that shaped her on her debut album, Old Time Feeling. Produced by Goodman with bandmates S. Knox Montgomery and Matthew Rowan, plus fellow Kentuckian Jim James of My Morning Jacket, it’s at once earthy and otherworldly, relaying her personal experiences alongside razor-sharp social commentary about the South. 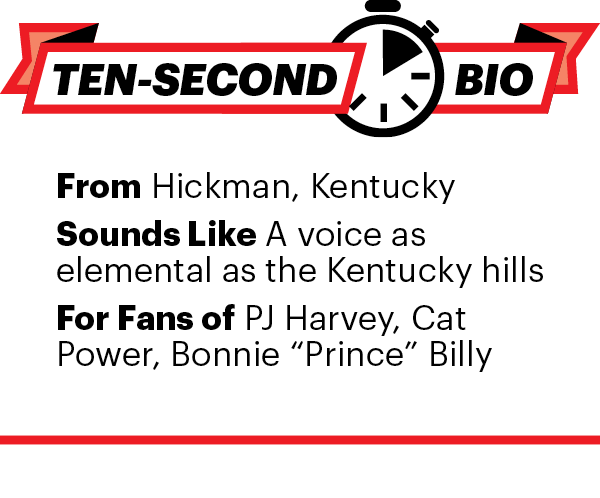 Raised primarily in Hickman (“The town, not the county — it’s a very important distinction. People get ticked about that,” she says), Goodman relocated to Murray for college and quickly fell in with the town’s thriving post-punk scene, which includes the popular record store Terrapin Station. For a time, she recorded under the Savage Radley moniker, contributing a song to the Pine Mountain Music Sessions, a local benefit album whose producer introduced her to James. “That’s what it’s all about,” she says. “Just these little pockets of subculture in these areas that you have to seek out.”

'In My Room' With Diana Gordon

'In My Room' With Phony Ppl

On Old Time Feeling, she’s both an outsider and close enough to her roots that she can sympathize with the people around her, even if they don’t always agree. “Oh sharecropper daughter, she sings the blues of a coal miner’s son,” Goodman sings on “The Way I Talk,” as martial drums trudge forward and guitar feedback buzzes ominously in the background. She touches on the struggles of average farming families, the outside forces that guide those struggles, and the magical ability of the people in power to “turn the poor against the poor.”

“Southerners should be telling their own stories — that’s important when you’re thinking about this,” she says. “And it’s the rest of the world’s responsibility to actually listen to people from these areas and what they have to say. And maybe take it upon themselves to dig a little deeper.”

With the garage-y title track, Goodman acknowledges some of the problems plaguing her part of the world and then saves some of her sharpest barbs for people who’d complain about it from afar: “Oh and I hear people saying how they want a change/And then the most of them do something strange/They move where everybody feels the same.”

“I’m very aware that many people don’t have the luxury to stay in the place they were born — in that either their mental health could be in jeopardy, there’s no work there, or they’re not safe,” Goodman says. “The best way to bring about change in a place that is maybe really isolated is [to] represent your political ideas, and the best way to do that is live ‘em out in front of people.”

She strikes a more conciliatory tone in the album opener, “Space and Time,” mining a dreamy Roy Orbison-style melody to talk about the ways she was formed by her experiences, both positive and negative.

“A person’s life really amounts to the people you share it with, whether that be good experience or bad,” she says. “We don’t thank people enough for what they’ve brought to our lives or tell people we love them enough.”

Citing Link Wray’s raw 1971 self-titled album as a major inspiration, Goodman explains that she left many of the tracks on Old Time Feeling intentionally unvarnished. Band members talk in the background, guitars buzz, and little blemishes are left like Easter eggs for listeners to find.

“I didn’t want to take the human element out of whatever we were doing,” she says. “There’s a few songs that are maybe a little more polished than normal, but that’s just because that’s what the song called for.”

Even when she’s not tackling the social and economic issues of the South, the region still shows up as a character in songs like the heartbroken “It Ain’t With Me Babe” and “Ain’t I a Big Girl Now.” There are mentions of cotton blooms, pecan hulls, and the wind rustling through the trees in a way that feels fully lived in, not perfunctory. Her voice takes center stage through it all, alternately sounding vulnerable and tough, diving and swooping in intuitive-yet-surprising ways.

“When I started playing with a full band behind me and realized I couldn’t be a whispery singer-songwriter, I started letting it loose,” she says. “Any musician who started out playing dive bars and loud rooms understands: You should never assume you’ll be able to hear yourself.”

Goodman ultimately sees Old Time Feeling as a document of her mindset when she was writing the songs, in all its complexity.

“As much as I would like to be one of those writers who’s like, ‘All right, I’m gonna write a concept album today,’ I just don’t write like that,” she says. “It’s just a snapshot of a particular time period, and in this particular time period I was going through heartbreak, which is there too. That’s a picture of real life: You can worry about your neighbor and their economic plight, but you can also be sad in your room and have your heart broken.”