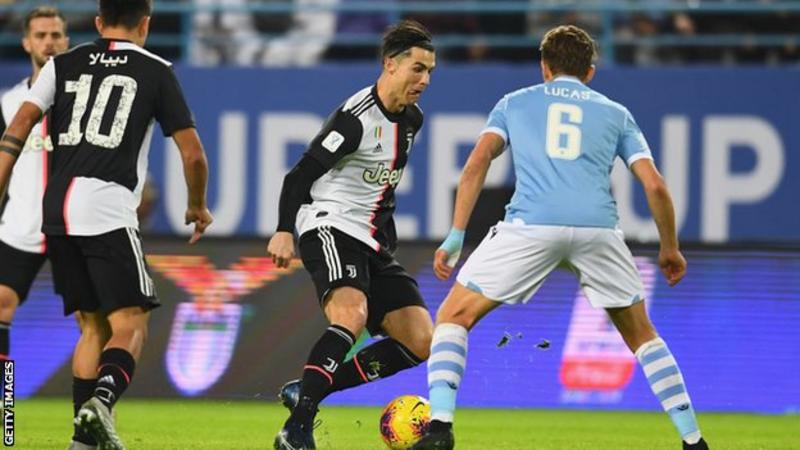 Serie A resumes this weekend with Juventus’ bid for a ninth successive title under threat.

The Old Lady are top of the table with 63 points but just one point behind are Lazio, setting up what promises to be one of the closest title battles remaining in Europe.

Why have Lazio been so strong this season? And which side was in form before the coronavirus pandemic brought a halt to the campaign? BBC Sport takes a look.

Juventus have the history but Lazio have the hunger

The top two still have 12 games left to play, meaning plenty of points to play for and plenty of opportunity for Juventus to turn this into yet another comfortable title romp.

However, Lazio will undoubtedly see things differently. Before all football in Italy was suspended in March, Lazio were a side in form. Unbeaten since September, they had won 16 of their previous 18 games.

Juventus had produced an impressive win in their final game before the suspension, beating Inter 2-0 to retain top spot, but their performances this season have been far from convincing.

They scraped past bottom club SPAL 2-1 on 22 February and had lost three of their five league games before that. Last week’s goalless draw with AC Milan saw them edge through to the Coppa Italia final on the away goals rule. 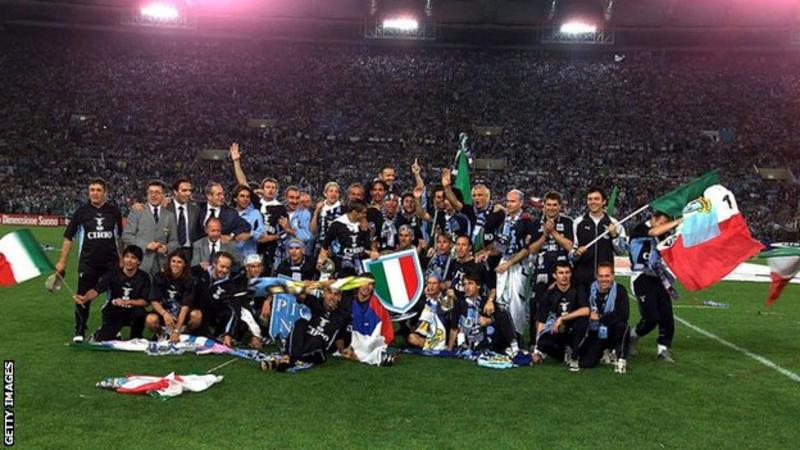 But Juventus have collected titles like confetti, winning the past eight in succession, so certainly have the know-how to get the job done.

They’ve also been in similar positions before.

Compare that with Lazio, who have won the league just twice before, with their last success two decades ago.

But what Lazio lack in title-winning experience, they make up for in belief – underlined by an Instagram post from midfielder Sergej Milinkovic-Savic back in January when he wrote: “Two things are certain in life: death and that Lazio never gives up.” 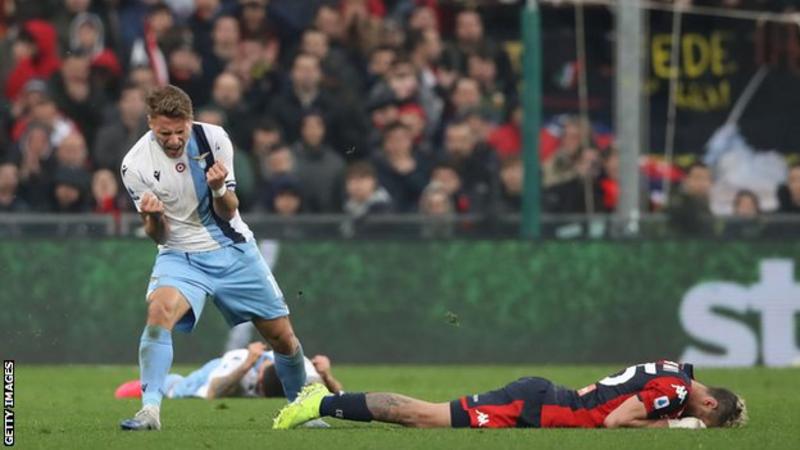 Ciro Immobile will be itching to get back on the pitch more than most given the incredible form he was in.

With 27 goals, the Lazio striker is Serie A’s leading scorer. Before football was suspended, he was also the top scorer in Europe, outscoring Robert Lewandowski despite the Poland striker seemingly bagging hat-tricks every time he played for Bayern Munich.

Lewandowski has since moved on to 31 league goals, with Bayern having secured an eighth straight league title since the Bundesliga resumed.

Immobile is in the form of his life and needs just three more goals to make this officially his most prolific domestic season of his career. 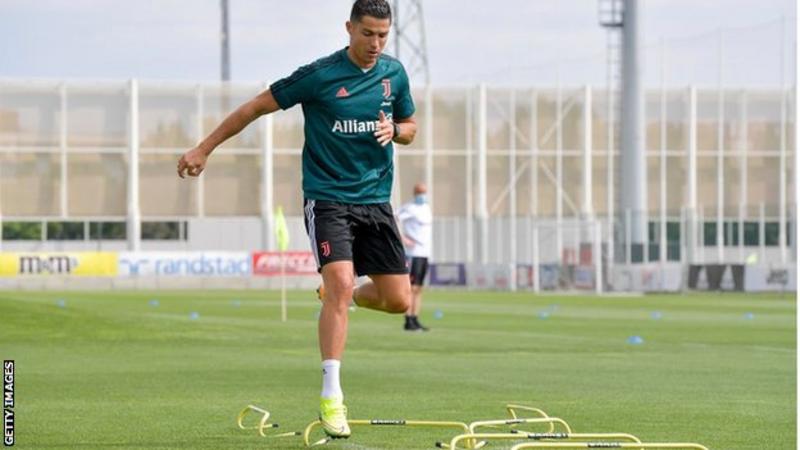 However, Juventus do have the Cristiano Ronaldo factor. The Portuguese star is on 21 goals for the season and is never one to settle for being second best.

Such is his determination to win a second Serie A title, he reportedly turned up for training last week FOUR hours before the rest of his team-mates as clubs geared up to return to play.

Immobile will need to hit the ground running again to keep a determined Ronaldo off his back.

Lazio have already got the better of Juventus this season 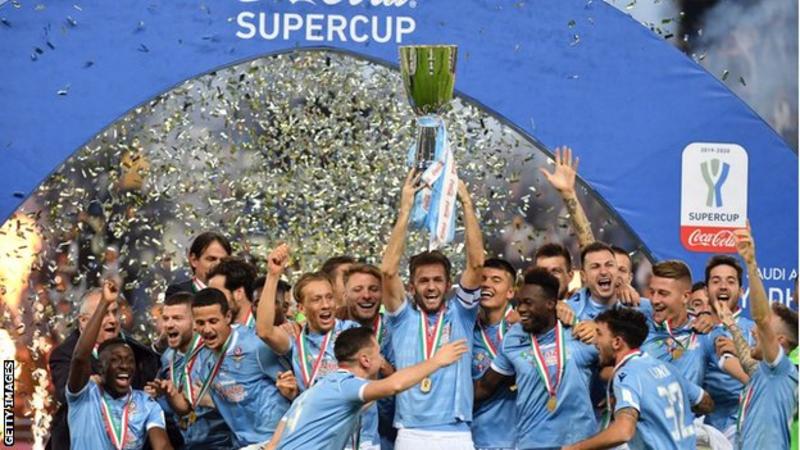 The first part of the season may feel like it happened before the last ice age but nevertheless, Lazio have already got the better of Juventus in the current campaign. And not just once, but twice.

In early December the two sides met at the Stadio Olimpico in Rome, with Lazio coming from behind to win 3-1.

It handed Juventus their first defeat of the season and underlined the feeling that this would be a real title battle.

But Lazio were not done there.

If Simone Inzaghi’s side can make it a hat-trick of wins when they meet again on 20 July, then that could have a massive say in the title race.

Rome wasn’t built in a day 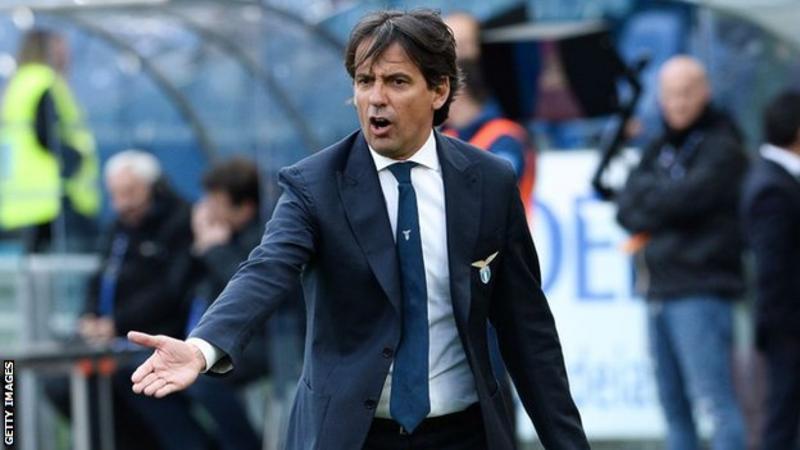 Speaking of Inzaghi, the Lazio legend has been a significant factor in this season’s sustained bid to bring the title to Rome.

When Lazio last won the league back in 2000, they were a team packed with stars such as Diego Simeone, Alessandro Nesta and Pavel Nedved.

This time, the team is not quite so loaded with big names but what Inzaghi has done over the last couple of years is patiently put together a side that is now arguably greater than the sum of its parts.

This, by and large, is the same Lazio team that finished eighth last season with a defence and midfield that regularly features four players 32 or older.

Having tinkered with formations in the past, Inzaghi settled on 3-5-2 this season and it has clicked, with every player understanding their roles and executing their tasks to near perfection.

It has been unexpected, but Lazio are on course to push Juventus all the way in their pursuit of a ninth consecutive Serie A title.