The axe has fallen on Seven's longtime reality TV staples My Kitchen Rules and House Rules as the broadcaster works to reclaim the title of Australia's most popular television network.

Newcomer Plate of Origin – starring MKR's Manu Feildel and former MasterChef judges Gary Mehigan and Matt Preston – has also been booted from Seven's 2021 lineup. The changes are part of the broadcaster's shift away from in-house productions to high-rating formats produced by external production companies. 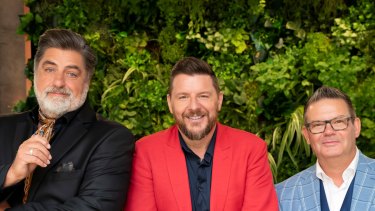 Seven’s new cooking show Plate of Origin won’t return next year, but the network is talking to the judges about other opportunities.Credit:Seven

Seven chief executive James Warburton said both MKR and House Rules had become “a bit stale” over the years. MKR has been on-air since 2010, while House Rules debuted in 2013.

“It wasn’t that we didn’t invest in them,” Mr Warburton said. “We tried really hard. But viewers are looking for something fresh and different. So we’ve rested them. We’ll bring them back at the right time when we’ve got the right momentum and they can be freshened up.”

On Wednesday, Seven unveiled its 2021 programming schedule at its annual “upfronts” presentation for advertisers. The broadcaster will bring back Big Brother, Farmer Wants a Wife and SAS: Australia and flesh-out its primetime schedule with family-friendly offerings that include extreme miniature golf series Holey Moley, Nine's former singing competition The Voice and hit US show Ultimate Tag.

Seven's head of programming, Angus Ross, said the broadcaster was looking to be “attention grabbing and disruptive” in 2021.

“We’re de-risking the schedule by commissioning proven, powerful formats around the world for our 7.30pm slots,” he said. “We’re not in the programming development game anymore. We’re about proven formats.”

Seven has promised its version of The Voice will be “big, bold and reimagined” with an all-new judging panel. The network has been courting US superstar Mariah Carey.

Mr Warburton said Seven would continue to focus on its sports lineup, which will include the Supercars from next year. He would not go into detail about whether the network had accommodated for a situation where it no longer holds the cricket rights. Seven and Cricket Australia are in a dispute over the value of the rights. The matter has been taken to arbitration.

“Sport is incredible when you look at how it all pieces together in terms of the platforms… between horse racing, AFL, the summer of cricket with the Ashes, Supercars and the Olympics within those seven months as well,” Mr Warburton said. “2021 is going to be incredibly important to lay a solid base on this road to recovery.”

Seven will also launch two new local dramas next year: Australian Gangster and RFDS. The latter will dramatise the everyday heroes in the Royal Flying Doctor Service; the former is a crime series set in Sydney and based on real events. New international dramas include The Pembrokeshire Murders and an adaption of Around the World in 80 Days.

Asked whether it was risky for Seven to rely on sport and primetime shows like The Voice (which traditionally utilise international celebrities and a live studio audience) in 2021 due to the ongoing COVID-19 pandemic, Mr Warburton said the broadcaster's schedule was flexible.

“We’ve got options,” he said. “Holey Moley is in the can and Big Brother is in production. So we can move stuff around and we’re COVID-proof in many senses. COVID-19 didn't single us out [this year] but it certainly hit us the hardest.”

As for former MasterChef judges Gary Mehigan and Matt Preston, the network says it would like to work with them again. The right format just needs to be found (preferably a relaxed or feel-good cooking show suited to the “back-end” of the week).

Seven has earned a metropolitan audience share of 27.3 per cent in the 6pm to midnight timeslot so far this year. Nine (the owner of this masthead) leads with a 27.6 per cent share while Ten sits on 18.1 per cent, the ABC on 18.2 per cent and SBS on 8.8 per cent. These figures reflect the traditional ratings period which excludes the summer holidays and Easter.

Big Brother, Farmer Wants a Wife, Australia's Got Talent, SAS Australia, The All New Monty, The Chase Australia, Better Homes and Gardens, Home and Away and The Good Doctor.

The rescheduled 2020 Tokyo Olympics, AFL, cricket (including the the BBL and WBBL), the Spring Racing Carnival, Supercars and The Front Bar.