CLEANEST DENIM IN L.A.?: Global denim manufacturer Saitex has announced the opening of its first fully automated jeans manufacturing facility in the U.S., in the denim capital of Los Angeles.

The cut and sew and finishing components have been partially functioning this year, but the announcement on Tuesday marks the Vernon-based facility being fully operational.

Already, the company — the only large-scale denim manufacturer to boast B Corp status — is touting the facility as the “Cleanest Denim Factory in the World.” For this feat, Saitex leans into investments in laser cutting, semiautomated sewing, robotic spraying, 3D laser detailing and one-step wash machines connected to a state-of-the-art water recycling system that recycles 95 percent of water used.

However, L.A. is already home to denim makers like AG Jeans (boasting Ozone technology that cuts water consumption in half, with water said to be fully recyclable at its Mexico-based plant), so the race for “cleanest denim” has its other competitors.

“We have been given a tool that should do no harm and benefit all,” the company said in a statement. The facility builds on Saitex’s vision to produce locally in the U.S., while seeking to be a fully vertical and circular organization by 2021. Other endeavors include a fabric mill in Vietnam, where the firm is based.

AN OPEN LETTER: Instead of shying away from political conversations, grievances are being aired the old-fashioned way: via letters.

In mid-February, a letter was drafted to President Joe Biden, on behalf of brands, journalists and nonprofits seeking formal leadership in response to an industry in crisis, a so-called fashion czar. In March, members of Parliament outlined demands for Boohoo chairman Mahmud Kamani, seeking supply chain updates with respect to forced labor claims.

The latest is an open letter to the European Union, as well as U.S. and U.K. governments written by Mostafiz Uddin, managing director of Denim Expert Ltd. Uddin is a sustainability advocate and spokesperson for main stage industry events, including Global Fashion Agenda.

He expressed dissatisfaction with the lack of support following the strain of the pandemic.

“While I do understand the urgency to fully contain the impact of the deadly virus, I may humbly underline that, in Bangladesh, the impact of the virus is deadlier in its own way. For certain, so many of our workers, largely female, stand to slide rapidly to a complex web of poverty — inequality — vulnerability. These young women are hugely dependent on apparel exports to stores in Europe and beyond,” Uddin said.

MASS MARKET SUSTAINABILITY: While the pandemic lashed the goals of many, some retailers managed not only to survive but thrive.

Those retailers boasting incredible revenue gains were Walmart Inc. and Target Corp., but how have vendors in more volatile categories fared?

“Our merchants have remained open — we have high hopes,” said Serkan Anders, vice president of marketing at Solo New York, a sustainable luggage and bag brand stocked at Target, Best Buy, Nordstrom, Macy’s, among others, aiming to recapture sustainability for the masses.

While demand has softened for travel amid the pandemic, the company is keeping a close watch on a summer rebound for travel.

The brand’s Re:cycled Collection — which launched in early 2020 — was recognized for its innovative use of polyester yarn recycled from discarded polyethylene terephthalate bottles, earning recognition from Business Intelligence Group. While it began as a capsule collection of a handful of items, it has expanded to 15 items.

“I’m a Millennial, and I am my own audience in this one,” Serkan said. “I want to be able to make a positive impact in the mass-market space. I want to be able to find a piece of me in that shelf. I’m not just looking for style. I think we have evolved beyond that — now it’s style and sustainability. You don’t need to spend a huge amount of money to get a smart piece of equipment.”

Solo New York is piloting a “green impact calculator” (which will be available on its website Solo-ny.com later this year), indicating a visual impact for each product to consumers, including the offset of trees planted and plastic bottles saved from landfill and ocean.

In the past year, the company was also awarded a 2020 SEAL Business Sustainability Award, which celebrates commitment to sustainable business practices, as well as Forest Stewardship Council certification for biodegradable hangtags last year.

Today the Re:cycled line is only one of 27 collections, but Serkan affirmed: “Every new collection, every new item that comes in is sustainable,” adding that through its efforts, the aim is to pivot the marketplace. “There’s a demand for it now that otherwise wasn’t there. The industry titans are moving in, and our research shows this.…Consumers are not going to have to pay the premium to get there.” 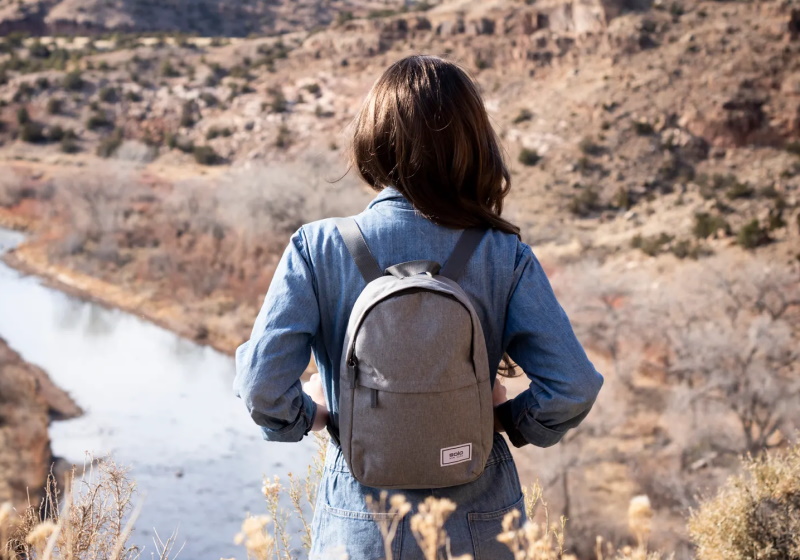