Snapchat has launched an augmented reality lens that allows users to channel their inner Damien Hirst.

The hugely influential British artist partnered with Snap to allow people to create their own virtual versions of his world-renowned Spin paintings.

The feature has been rolled out today to users around the world. 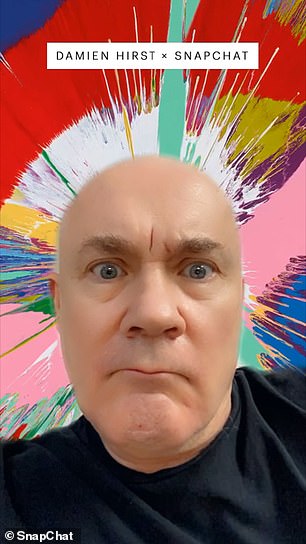 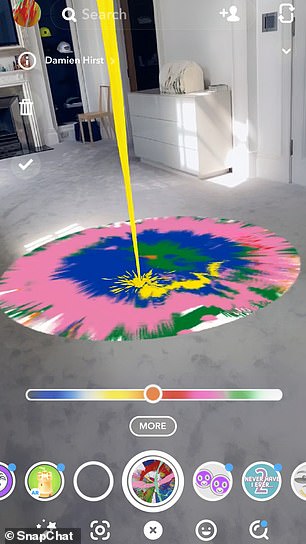 A virtual canvass appears on the floor when using the Snapchat lens and people can then pour art on to it as it rotates.

A sliding scale at the bottom of the screen allows the user to change paint colour.

As soon as a user presses the screen, the paint begins to pour. It is then that the social media app creates the masterpiece.

Mr Hirst, a founder of the Young British Artists (YBA) era in the early 90s, made a name, and a fortune, for himself with Spin art.

Experiments with the new art-form in 1992 and at his first exhibition of these works, visitors were invited to make their own drawings on a spin drawing machine made from a drill.

This approach has been modernised and sanitised for the coronavirus quarantine by Snapchat.

The partnership between Mr Hirst and the social media platform supports Partners in Health, an organisation supporting vulnerable communities during the pandemic.

‘It’s amazing to be working with Snapchat on this totally mega spin art lens and making it possible for millions of people to make their own spin paintings right from their phones,’ said Mr Hirst

‘I’m so happy that this partnership also supports Partners in Health, a brilliant and forward-thinking organisation that helps communities in developing countries around the world cope with the devastating impact of COVID-19.’