Stuck inside their art deco apartments in a pandemic-induced slowdown, Melbourne neighbours Kim Lyons and Tania Schneider have made friends from their windowsills.

They waved for the first time last Wednesday, when Ms Lyons opened the frosted windows that overlook an atrium after her husband learned he could be out of work.

She didn't know it yet, but her neighbour Ms Schneider had just lost her own temp job due to the coronavirus and was spending most of her time home alone under social distancing rules. 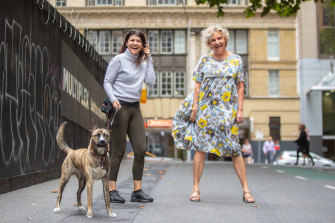 "I just sort of walked out of the room to feel better when he told me, and I just threw open the windows and looked across and realised Tania was over there, I don't know her name then," Ms Lyons said. "She waved and it was just a really sweet moment."

Since then, Ms Lyons has left the frosted windows open so that Ms Schneider can see straight through their lounge and dining rooms to the trees on Queen Street.

They met for the first time on Thursday, for a photo for The Age, despite living in the same building for more than a year. Now they wave every day and chat across the atrium.

"Sometimes it's a smile. It's not even so much that we're talking, it's just like, you're there and I'm here and we're not going anywhere, but I know what you're going through," Ms Lyons said.

"Reassuring is the word I guess, and unexpected."

Ms Schneider, 51, takes her dog Frankie (a 10-month-old husky-staffy cross) for a long walk down the river to South Yarra early every morning around 5.30am or 6am.

Otherwise, like so many other Australians during the pandemic, she is at home alone for most of the day.

It's been "incredibly boring" at home, but she's trying to stay positive – despite some nerves about finances.

"All I want to do is work, but I can't because everything's closed down. 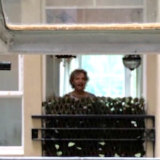 The view to Ms Lyons’ apartment.

"It's nice to have Kim say hello to me in the mornings. They're the only people that I can see right now, [the person] upstairs kinda waves. It's weird being in this situation.

She said it was "a really nice act of kindness" for Ms Lyons to take off the frosting so she could see through to the trees on Queen Street while she sits at her desk.

"It's crazy, I couldn't believe it. I almost fell off my chair, 'who are these people?'.

"They still have their privacy, but it's nice that I can actually see straight through, it's a really lovely thing for her to do." 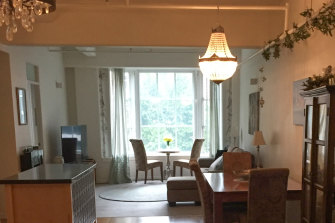 Ms Lyon’s bayview window, where she’s spending her time in the slowdown.Credit:Kim Lyons

Ms Lyons, who is retired, would normally go to the pool four days a week and spend her weekends at pub gigs in the inner-north. Instead she's enjoying the view from her bayview window under the stay-at-home rules.

"It can be quite a lonely thing," Ms Lyons said. "Thank goodness for [Tania]."

Her husband is still working from home while he waits to hear if he still has a job.