Stefano Domenicali insists Formula One does NOT have a racism problem

EXCLUSIVE: New F1 chief Stefano Domenicali insists the sport does NOT have a racism problem as he discusses its human rights record and Lewis Hamilton’s future in his first interview since taking over from Chase Carey

Stefano Domenicali was the motor racing nut who as a teenager checked passes and stewarded cars in the royal park at Monza. He directed Bernie Ecclestone to his parking space and today we find him sitting in the old boss’s chair.

‘You can imagine when I was a kid, Bernie was a myth — he still is,’ declared Domenicali. 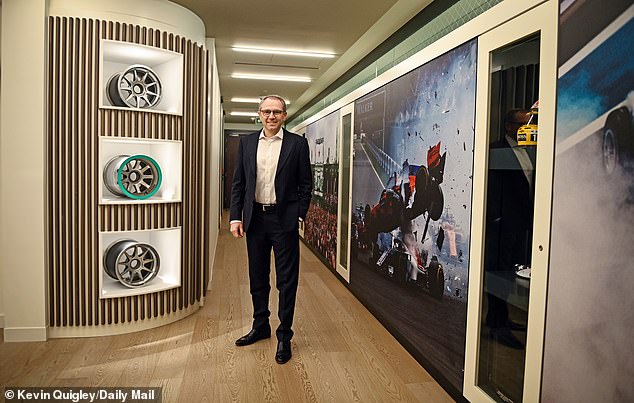 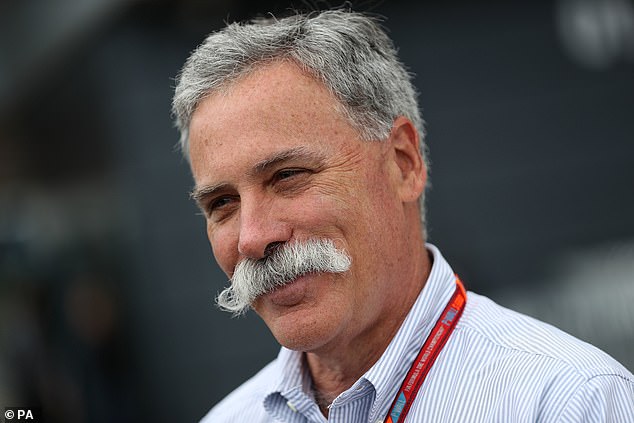 Domenicali took over from Chase Carey, the corporate American with no interest in racing

The TARDIS-like office opposite Hyde Park where Mr E courted presidents and prime ministers closed down for serious business the moment Liberty Media took control as part of their £6billion acquisition of the sport in 2017. They upped sticks to St James’s Market off Regent Street — a plusher home for the shiny new owners.

Domenicali is rattling around the place in these strange times. Most of the staff are working from home, but he has completed his quarantine period since travelling from Italy to London and is in the boardroom for his first face-to-face — socially distanced — newspaper interview since taking over from Chase Carey, the corporate American with no interest in racing, who would treat journalists with an enthusiasm others reserved for undertakers.

Carey was the anti-Ecclestone. A watchful chief executive, he considered business best kept behind closed doors.

Domenicali is markedly more open. A youthful 55, he is steeped in the sport — born in Imola, son of a banker, he left Bologna University with a degree in business administration to join Ferrari — having already been licensed as a steward, race director and clerk of the course.

He rose to team principal when they won the last of their world titles in 2008, before a stint as CEO of Lamborghini. Now he is taking up the top job as chief executive of Formula One.

‘I get on well with Bernie,’ he said, a departure from Carey’s frosty relations with his predecessor. ‘We speak almost every week. He said to let him know if I need advice. Formula One without Bernie, I’m sorry, would not be what it is today. 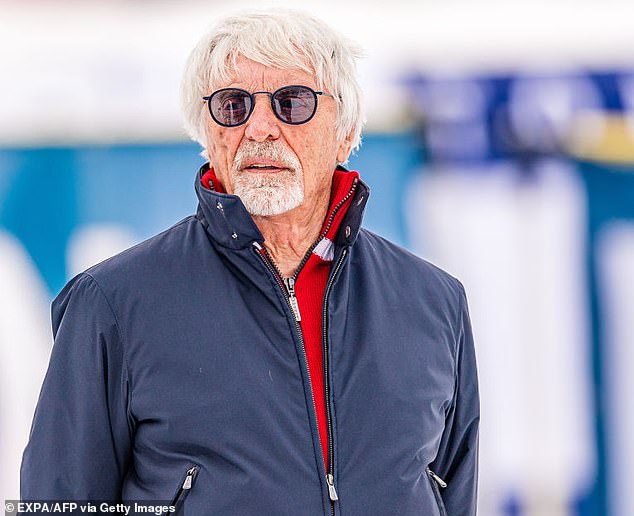 ‘You must not forget he is a pioneer in understanding the opportunity presented by cars being driven around the track and building the right enthusiasm, structure and business.

‘I have a lot of admiration for him and what he did. His paddock pass is ready and I hope he can come to races.’

Domenicali is a conciliator. Nobody in the sport has a bad word to say about him. If there is a doubt at all, it is whether he is too nice for a role at the head of what has been called the Piranha Club — the alpha-male ecosystem in which team principals ruthlessly pursue their own interests. This week he travels to Bahrain for pre-season testing and a meeting with the drivers — to talk to them and listen to them.

One subject top of the agenda is the Sir Lewis Hamilton-led campaign for diversity after a year in which the seven-time world champion called for the sport to move away from its white-centric base to embrace different cultures. I asked Domenicali if he thinks Formula One has a racism problem.

‘I don’t perceive that,’ he said. ‘At least I don’t see that from personal experience; in truth, the other way round. Formula One started in certain parts of the world — Europe — but it has moved into other areas and multi-culturalism is growing. This growth is a value, an asset. 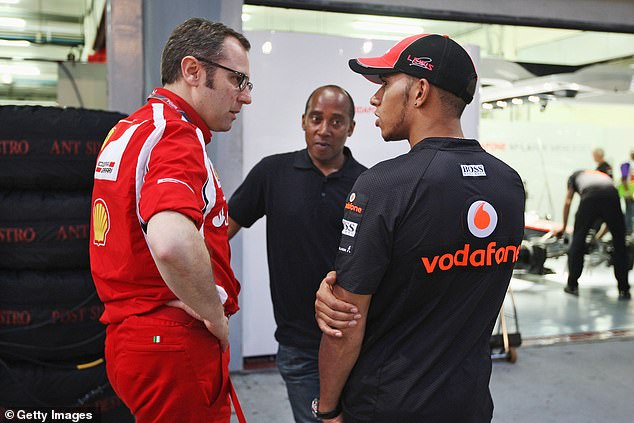 ‘When I joined Ferrari in 1991 it was 99.9 per cent Italian. Then we were joined by people from the UK, France, Japan, Switzerland, Germany — changing in terms of culture and colour, offering an incredible possibility to know people who were different.

‘Down on a knee, knees up — these things have different meanings depending on where you are in the world. It is important these gestures, which need to be respectful to the sensibilities of everyone, are backed up with actions, with credible context.

‘I want to discuss the knee with the drivers. We do not want to be focused on a single gesture. There is a big platform before races but we do not want to maximise it in a political way. We want to highlight values that are important to the world and to Formula One.

‘We want to have a scholarship to help people who can’t afford a certain degree of study to get into Formula One and to grant accessibility to everyone, to get more women into top positions.’ 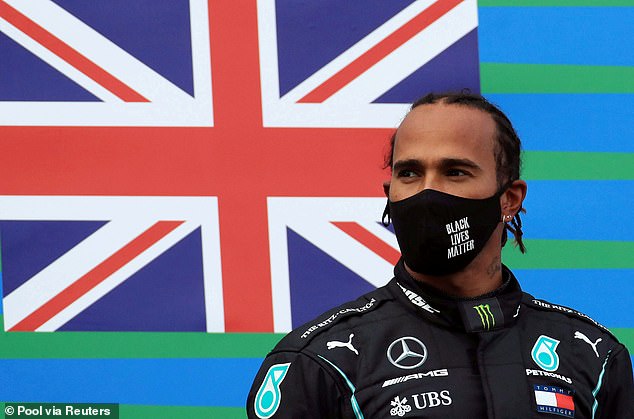 Domenicali is a great admirer of Hamilton’s ability and his unique capacity to focus on his supreme driving while simultaneously tackling broader issues.

His great friend Michael Schumacher, whom he has visited since his debilitating skiing accident but about whose condition he will reveal nothing, was single-minded, no distractions. Hamilton is different.

‘I haven’t asked Lewis how long he will go on,’ Domenicali added. ‘He knows I want him to go on and on. He is incredible, at the top of his profession and that position gives him great credibility talking about other issues that are important to him. The fight on the track this year will not be easy. The level of the top drivers is the best it has ever been.

‘Max Verstappen seems like an old guy because he has been around a long time, but he is just 22. Charles Leclerc at Ferrari is strong, Carlos Sainz has gone to Ferrari. There is Fernando Alonso back with Alpine. Sebastian Vettel is at Aston Martin and will want to show he is not the driver we saw last season. Lando Norris at McLaren. George Russell at Williams. 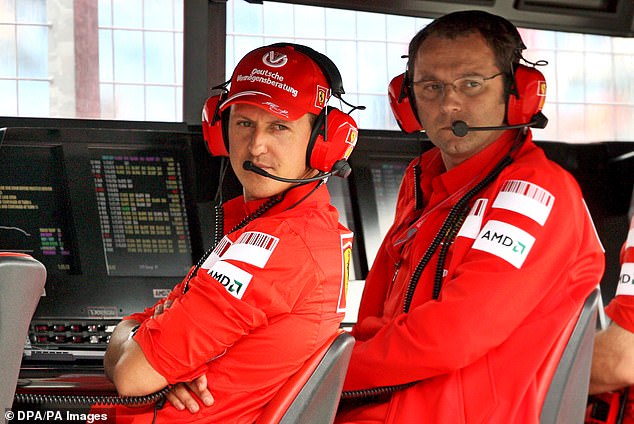 His great friend Michael Schumacher, whom he’s visited since his accident was single-minded

‘Mick Schumacher at Haas. Ha, I knew him when he was a bump in his mother Corinna’s body. He reminds me of Michael. He is a team player — Michael was that more than anything else.

I ask him, with his experience in red, if he envisages Hamilton ever going to Ferrari.

‘No, I don’t think so. They have invested in Charles and now Carlos. Lewis will end his career at Mercedes.’

The new season, starting in Bahrain on March 28, sees Formula One go to Saudi Arabia at the end of November — another recruit to the list of abysmal human rights-screwing countries. How, pray, does that fit in with the all-singing, all-dancing diversity agenda?

‘Zero embarrassment,’ Domenicali answered. ‘Formula One has a role to play in advancing our values in different places in the world. Sport can progress this in a faster way, shining a spotlight. We can be an enabler and are discussing these kinds of things with the Saudis. 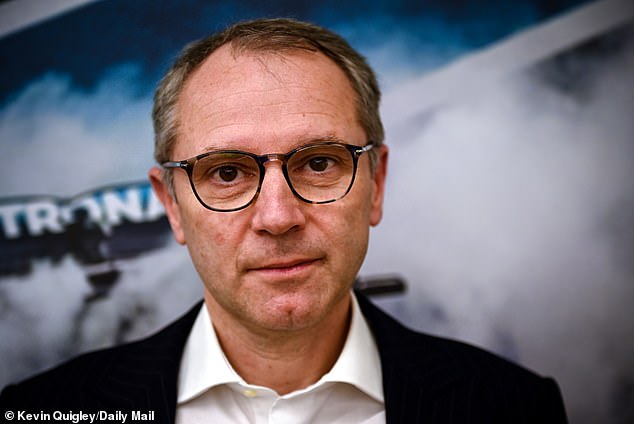 ‘I want about one third of the races in Europe and then to expand globally. Two races in America. We are in talks with African countries, South Africa and north Africa and an additional race or two in the Far East, maybe Korea.’

Yes, Miami — long talked about — is favourite to land the second US race, alongside the existing venue in Austin, Texas. The notion of four American races, trumpeted by Carey, has been ditched. It is impracticable, as Ecclestone always prophesied.

What else will Domenicali tell the drivers in Bahrain?

‘Don’t shoot the sport in the feet. We have a lot to be proud about — viewing figures are up, and we have a great product. If there is anything we need to discuss we can do it constructively inside these four walls.’

Apart from that, Domenicali is looking to immerse himself in London culture, bringing his family over for the full experience — a ‘yes’ to diversity! He is keen for the restrictions to lift and, among other delights of the capital, to sample the cuisine.

The next time we sit down it will be over lunch.