“On a completely unrelated note, I want to thank Laura Benanti for her service to a grateful nation.”

On Monday, First Lady Melania Trump released a goodbye video following her time in the White House — but it wasn’t exactly a hit with “The Late Show” host Stephen Colbert.

Calling the past four years “unforgettable,” Melania asked all Americans “to be an ambassador for Be Best,” her anti-bullying campaign, and to rise “above what divides us.” She also asked for everyone to “choose love over hatred, peace over violence and others before yourself,” before doing their part to “teach out children what it means to Be Best.”

“I think your message was clear to the children, particularly the Boogaloo Boys, the Proud Boys and the Children of the Corn,” Colbert began his monologue later that evening.

“One thing the first lady did not mention in her address today is what she’ll be doing after Inauguration Day, because while her husband has been fighting to stay in the White House, there are reports that privately, Melania ‘just wants to go home’ and ‘cannot wait’ to get back to New York,” he continued. “So, what are the first lady’s future plans? Over the years she’s appeared on this show numerous times, and tonight she wanted to come back and make another official announcement.”

With that, Colbert recruited Broadway star Laura Benanti to do her now-infamous Melania impression “one last time.”

Celebrities React to Trump's Twitter Ban: 'We Did It'

The rest of the sketch was a parody of “Belle” from “Beauty and the Beast,” showing her waltzing through the streets of New York while bystanders let her know she was not welcome there.

“Starting to wonder if New York dislikes me. What is this word complicity?” she sings at one point. “No one in Earth is bullied more than me!”

“Oh, even New York hates me. There’s nowhere for me I can think of,” she continues, waking up to her harsh reality. “Oh God, there’s only one last option. Will I have to move back in with my husband who I … love.”

Following her performance, Colbert added, “On a completely unrelated note, I want to thank Laura Benanti for her service to a grateful nation.” 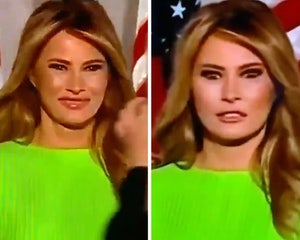