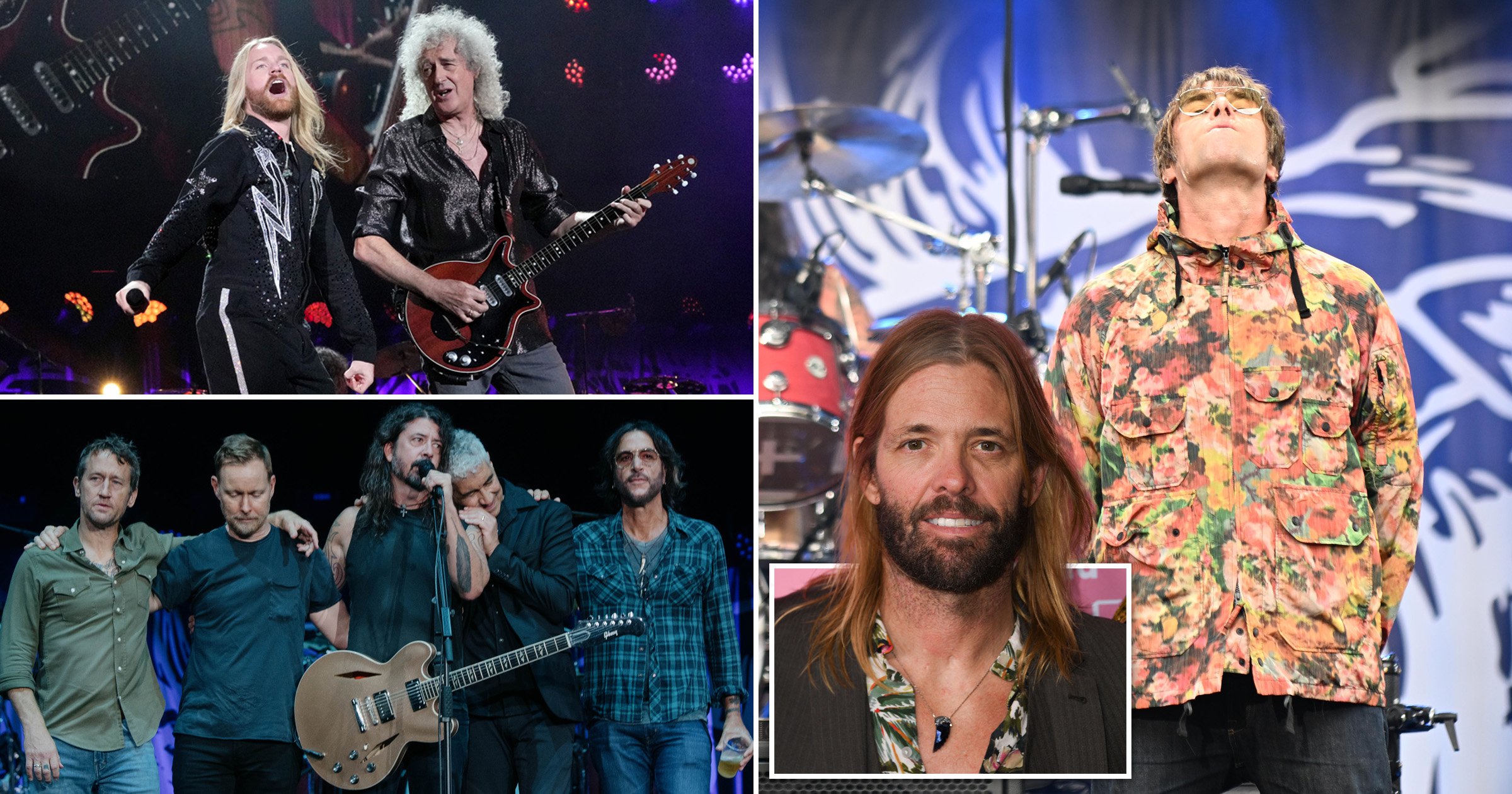 Wembley Stadium lit up on Saturday night with music and love from some of the industry’s finest at the Taylor Hawkins Tribute Concert, organised by the Foo Fighters in memory of their late drummer.

Hawkins, who died suddenly in March this year aged 50 while the group was in Colombia on tour, drew a capacity crowd of nearly 90,000 fans at the venue, alongside acts such as Queen, Supergrass, Liam Gallagher, The Pretenders and Sir Paul McCartney.

The epic nearly six-hour long show saw the popular London venue’s atmosphere move from relaxed yet celebratory to electric as the night wore on and darkness fell, allowing for some gorgeous lighting design and a touching torch tribute moment in the darkness, encouraged by Queen’s Brian May.

At the concert’s opening, Foo Fighters front man Dave Grohl had promised it was going to be ‘a long f**king night’, and he wasn’t lying – it was a mix and meld of rock acts and musicians, some of whom were playing together for the first time.

As Grohl put it, Hawkins was ‘bringing people together who have never met, never played together’, and the result was a fresh and entertaining night of music.

The majority of guests played or sang along with the Foos or Grohl, unless they were a complete group in themselves or the band was taking a deserved quick break, and Liam Gallagher was given the distinction of opening the show, which he did with aplomb courtesy of Rock ‘n’ Roll Star and Live Forever.

The tribute show kept Hawkins as its focus easily, due to the love and connection each act shared with the late star, from his ‘side project’ bands Chevy Metal and The Coattail Riders to Supergrass – acknowledged as Hawkins’ ‘favourite band’ – who pepped up the house with a set including their iconic track Alright.

Guest vocalists were as eclectic as Kesha on Children of the Revolution and Violet Grohl doing Valerie with Mark Ronson to Justin Hawkins, who pulled more than double duty, popping up with The Coattail Riders, Chevy Metal and Wolfgang Van Halen, and Queen for Under Pressure.

Queens of the Stone Age’s Josh Homme was another close pal who put in significant stage time, both with Nile Rodgers and Them Crooked Vultures.

Metallica’s Lars Ulrich and AC/DC’s Brian Johnson also joined forces for an energising one-two punch of Back In Black and Let There Be Rock.

Interspersed between the acts were live and recorded tributes from the likes of comedian Dave Chapelle – whose speech included mention of Hawkins as both a rockstar and a ‘cool f**king dad’ as he chatted to his son Shane – as well as Ted Lasso star Jason Sudeikis, Sir Elton John, Stevie Nicks and Billie Eilish and Finneas.

Although there were occasional lulls in the evening, the music consistently remained at stellar levels – with a few real highlights on top as darkness fell and the energy upped to more ferocious levels.

Hawkins’ formative inspirations, Canadian Rock outfit Rush, shone as Geddy Lee and Alex Lifeson took to the stage to honour their friend, playing alongside Dave Grohl for a three-song set. That rolled right into five songs with Queen and Foo Fighters as Brian May and Roger Taylor had guest vocalists Luke Spiller from The Struts, Justin Hawkins and – in a very popular move – a surprise appearance from Eurovision runner-up Sam Ryder.

The night’s final segment was a revolving door of drummers paying homage to Hawkins, following on from Police’s Stewart Copeland earlier – ‘one of Taylor’s greatest influences’ – with Grohl joking that backstage looked ‘like your local music shop’ due to the number of kits present.

Blink-182’s Travis Barker and Roger Taylor’s son Rufus Taylor were among the percussionists that drummed along to Foo Fighters anthems like The Pretender, These Days and Best Of You.

Sir Paul McCartney then made a previously unannounced appearance alongside Chrissie Hynde for a duet of Oh! Darling before staying for Helter Skelter – you know it’s a peak-level night when a Beatles legend casually takes to the line-up.

However, the most emotional moment of the night was saved until last, when Hawkins’ 16-year-old son Shane took to the drums in his dad’s place with Foo Fighters to drum his heart out for one of their most popular anthems, My Hero.

There was only one way to go from there, and that was a stripped-back performance of Everlong from Grohl to bring the crowd down and wrap up the night.

Yes, there were legendary acts on the bill for the Wembley tribute concert but what undoubtedly made it special was the connection each singer and instrumentalist shared with the much-missed Hawkins.